Larking about in mud, mud, glorious mud: Author reveals the extraordinary treasures she finds hidden in the bleak shoreline of the River Thames

For years, Lara Maiklem has been a devoted mudlark, a searcher in the mud of the Thames foreshore.

Her early finds included ‘an empty duffel bag, two scooters, an old lighter, a shirt, a Wellington boot, headphones, a submerged shopping trolley, a car exhaust, a traffic cone, a mobile phone and 14p in change’.

This doesn’t sound much more enticing than a visit to the local tip, so why does she persist in her hobby? Because, at other times, she has found the most extraordinary treasures — not always valuable so much as hauntingly evocative of past lives and lost loves… 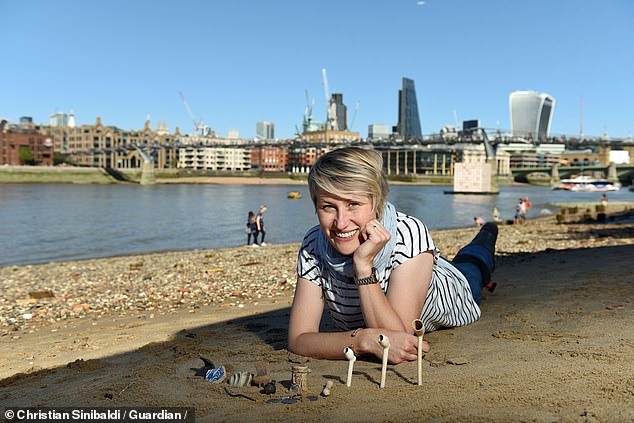 Lara Maiklem (pictured) has been a devoted mudlark, a searcher in the mud of the Thames foreshore, for years

Another reason why she has grown to love the bleak Thames shoreline, she explains, is that she was raised a farmer’s daughter in The Weald and, after moving to London, felt the need for wide-open space.

Stepping from some traffic-choked street down forgotten steps beside a bridge, or a rusting iron ladder bolted to the massive Embankment wall, she is transported to a world much closer to nature. There, she is in a world of cormorants and gulls and a thin scattering of mudlarkers like herself.

What she finds most evocative are things such as ‘prayers and curses, Remembrance wreaths, single roses, love letters, torn-up photographs’, not to mention the tooth of a shark that became extinct 3 million years ago.

One fellow mudlark even found ‘a large uncut emerald’ — although, on the whole, mudlarking isn’t much of a way to get rich. For that, you’re probably better off working in one of the many investment banks nearby. 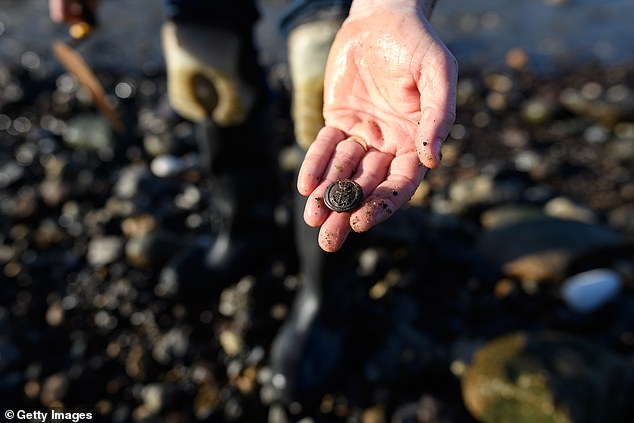 What mudlarking does give Maiklem is a powerful sense of connection to the past. There are stretches of the Thames in Central London that contain structures ancient beyond belief: at low tide at Vauxhall, the river reveals a row of wooden posts in the mud, ‘first noticed by a mudlark in 1993’ and subsequently dated ‘to the Middle Bronze Age, approximately 1500 BC.’

People have been sailing and trading on the river for millennia. Maiklem has found several Roman coins, her first being a small silver ‘siliqua’ from the reign of Honorius (393-423), a rather useless Roman Emperor whose greatest concern, as his Empire began to totter and fall, was the wellbeing of his chickens. 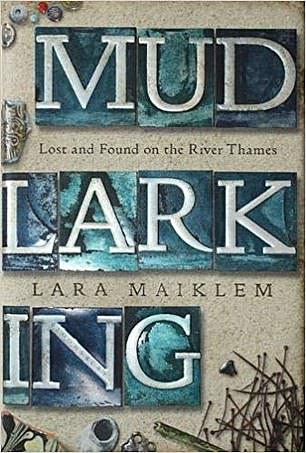 You learn a lot of fascinating stuff about the history of the Thames itself along the way, including the enjoyable factoid that, in 1814, the river froze so hard that someone led an elephant across it.

From more recent times, Maiklem once found an object she thought looked like ‘a large bullet’, so innocently took it home to add to her collection. Later, she showed it to a neighbour who knew about military matters ‘and he took a very big step away from me’.

It turned out she was nursing an unexploded hand grenade — and old ones can be ‘extremely unstable’. She disposed of it fast.

It’s sad to learn that you now need a licence to mudlark: the river is eroding and destroying all the possible finds anyway, so why shouldn’t people be allowed to find them first? Alas for elf ‘n’ safety.

This is a quirky and delightful read, wonderfully evocative of London’s gloopy, ghost-haunted river, like ‘a great khaki dragon snake’, which she pictures flowing on an incoming tide, winding past Greenwich, ‘to sort the remains of Tudor feasts’, past Cuckold’s Point, ‘where it will play with the bones of abandoned warships’, and on westward, ‘to swirl around the prehistoric remains at Vauxhall…’

In ‘Idiot Wind,’ a Lost Soul Finds His Way Home