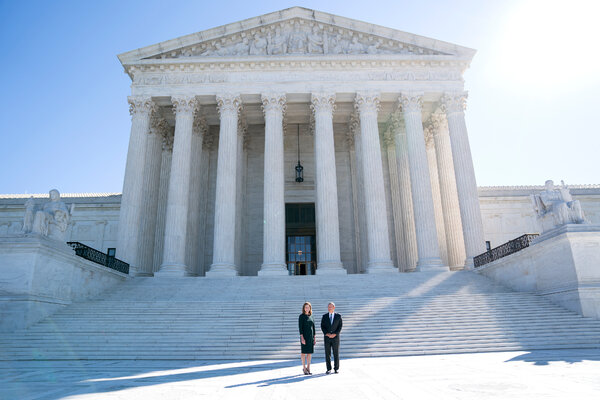 JUSTICE ON THE BRINK

The Death of Ruth Bader Ginsburg, the Rise of Amy Coney Barrett, and Twelve Months That Transformed the Supreme Court
By Linda Greenhouse

Linda Greenhouse’s new book on the Supreme Court opens in October 2020, with the drama of Justice Amy Coney Barrett’s appointment by Donald Trump. By rights it should have started in 2009, when Barack Obama was president, Democrats controlled the Senate and Justice Ruth Bader Ginsburg was diagnosed with pancreatic cancer — her second cancer diagnosis in a decade. Ginsburg lived another 11 years, spectacularly beating the odds even after a third diagnosis in 2018. But in retrospect, nothing is clearer than that she should have resigned expeditiously after learning she had a cancer that has an average five-year survival rate of 10 percent.

Ginsburg, who as Greenhouse notes was sometimes called the Thurgood Marshall of the women’s rights movement, was playing Russian roulette with the future of abortion rights and civil rights. If a majority of the justices overturns Roe v. Wade in the current Supreme Court term, Ginsburg’s death in 2020 will be the most immediate cause. Mitch McConnell and the Republican Senate played a key role, of course, by blocking the appointment of then-Judge Merrick Garland toward the end of Obama’s term and then confirming Justices Neil Gorsuch, Brett Kavanaugh and Barrett. The vacancy created by Ginsburg’s death, however, was the crucial moment for a court on which Chief Justice John Roberts had migrated to the center in the interest of preserving the court’s institutional legitimacy.

Greenhouse, who covered the Supreme Court for The New York Times for 30 years, from 1978 to 2008, is the acknowledged dean of living Supreme Court journalists. Her stated goal in “Justice on the Brink” is not analyzing Ginsburg’s choice to retain her seat but “chronicling the life of the Supreme Court from July 2020 through June 2021.” No one can recount judicial decisions as accessibly and intelligently as Greenhouse. She does an excellent job of describing the court’s jurisprudence during that year, interspersing short biographical observations of the justices and filling in useful background.

The challenge the book faces, therefore, doesn’t derive from Greenhouse’s admirably clear account of the court’s business. It’s the unfortunate fact that, in the year under consideration, the most important news about the Supreme Court consisted of things that the court’s activist conservative majority did not do.