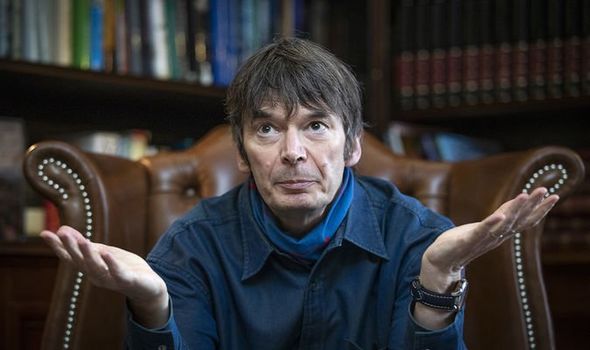 Though he tends to stay out of politics, Ian, 61, joined broadcaster Jo Whiley, whose sister Frances has a learning disability, in raising fears that vulnerable people had been “forgotten” amid other government priorities as the country opened up.

Speaking by phone from Edinburgh, he explains: “It was frustrating when people started to get jabs because those with special needs were not being prioritised. It’s possible they thought because they’re mostly in care homes they might be safe.

“The positive thing for us was that Kit was safe – all the workers in the care home did their damndest and there were literally no cases. But now there’s an issue with younger disabled people under 18 whose parents are having to push for them to have jabs. An awful lot are still in lockdown, because they’re too vulnerable to go out.”

While all this was going on, the bestselling Scottish author channelled his anxieties and frustrations into his latest book, The Dark Remains. And not for the first time.

Living in France in the early Nineties, Ian and Miranda suspected their son, then aged two, was not developing properly.

After a series of baffling meetings with specialists and consultants, they would return home and Ian would climb the stairs to his attic writing room and take out his anger on Rebus.

“My head was full of questions about Kit. We couldn’t always understand the doctors because they were talking in medical French and so I just dumped everything on Rebus; all the frustration went on him in a big, complex, angry book,” he explains.

The resulting novel, Black And Blue, is often cited as the book that propelled Ian to the top of British crime writing. Having won the Crime Writers’ Association’s coveted Gold Dagger prize, it was the first of his books to be televised, starring John Hannah as the hard-bitten, heavy-drinking detective. It remains a fan favourite to this day.

He continues: “By the time I wrote the next one, [1998’s The Hanging Garden], we’d been told Kit probably wouldn’t walk, so the first thing that happens is that Rebus’s daughter, Sam, is in a hit-and-run accident and ends up in a wheelchair. It was a case of, ‘I have to deal with a disabled kid, you have to deal with a disabled kid. Let’s see how you like it.’ It was spite on my part… but it was my way of dealing with it.

“If you’ve got a member of the family who’s disabled, there’s always another fight just around the corner, you’ve got to stay strong – there’s always bureaucracy to battle. Having a kid with special needs has led to me meeting a lot of families who have got to work hard to make life as positive as it can be, raising money to buy an electric wheelchair or therapy they need, maybe abroad.

‘I have for any writer… much respect “I’ve met so many everyday heroes and, in a sense, because my books have been successful, if there’s any equipment Kit needs we can get it, but I always feel there are so may other families out there who don’t have that privilege and are always having to worry about funding.

“It’s really tough for all kinds of reasons, but the thing that binds you is love. And there’s so much of it out there and that’s what families have got – they will do what it takes because they love their kids.”

Since his family was finally double jabbed a few months ago, some semblance of normality has returned. “Now, if we do lateral flow tests and we’re negative, we can take Kit out for a walk,” says Ian. “He’s a lovely kid, he’s great fun to be around, and very sociable.” Yet even now, despite the advantages of financially secure parents with a public profile, Kit’s normal life remains restricted. He is not getting many of his therapies and Ian worries his son’s experience is the tip of the iceberg for differently-abled people.

“We’re really lucky because the care home Kit’s in is just great. All the clients were really well looked after. But a lot of the therapies Kit was getting, he’s still not getting a year and a half on. They’d go to the swimming pool or someone would come in and do a foot massage or go indoor skiing. This all fell away.

“As long as Kit’s got people around him he’s happy, but some clients were very aware they weren’t doing things they expected like going to church or a footy match. I think they found that quite upsetting.”

Not one to make a fuss, Ian remains sanguine about his own lockdown experience. But The Dark Remains has a fascinating origin, based on notes left by the late, great Glasgow writer William McIlvanney, often described as the “godfather” of Tartan noir for his cult Inspector Laidlaw books.

McIlvanney won the 1975 Whitbread award for his novel Docherty, but for many fans it is for his triology – Laidlaw, The Papers Of Tony Veitch and Strange Loyalties – set in a grimy Glasgow netherworld of crime, and featuring the eponymous detective, that he is best remembered today.

“Willie was an important author to a lot of us who became crime writers in Scotland because he was a working-class, self-taught, intellectual,” explains Ian. “He’d won the Whitbread award and then he went off and wrote these three crime novels. He made it okay to write crime fiction. If McIlvanney wrote it, it must be literature.

“Willie brought a literary sensibility, not only in his style of writing which is full of metaphors and images, but also the character of Laidlaw. He’s an intellectual. He reads difficult philosophers in between cases.

“I wouldn’t have done this for any other writer. And because I’ve so much love and respect for Willie, it was important I do as good a job as I could for this and hopefully the book will bring new readers.”

The pair first met in 1985 when Ian, studying literature at university, ran up to the older man at the Edinburgh Book Fair clutching a dog-eared copy of one of his books and told McIlvanney he was writing his own novel that was “a bit like Laidlaw but set in Edinburgh”. The author signed Ian’s paperback: “Good luck with the Edinburgh Laidlaw”.

“Then our paths didn’t really cross until I was a published writer,” continues Ian. “I came back to the UK to do a book tour for Black And Blue and Willie turned up at my reading. There were no chairs. He sat down on the floor and it was like royalty had entered the room.”

But while Ian’s star rose with the progressively bestselling Rebus books – the most recent, last year’s A Song For The Dark Times, was his 23rd appearance – McIlvaney’s own profile had begun to wane.

“His agent told him, ‘If you keep writing these you’ll become rich’. But the stories he wanted to tell couldn’t always be contained within the limits of the crime genre. So he wrote more literary novels, essays, reviews and poetry.”

The Laidlaw books, the last published in 1991, eventually slipped out of print, copies trading hands for increasing amounts of money, until they were reissued in 2013, two years before their author’s death aged 79.

“When they were reissued, he started to get a sense of how important those books were,” says Ian. “I interviewed him at the Harrogate Crime Writing Festival. It was a 10am on a Sunday morning and he said, “Who’s gonna want to come, nobody knows me?”

“We walked into the ballroom and there must’ve been 800 people there. It was standing room only. I could see him almost rise off his feet, because it started to dawn on him people had not forgotten him and he was seen as an important writer, not only in Scottish crime fiction, but in British crime fiction.”

Ian had just finished his most recent Rebus when publisher Canongate asked if he fancied taking a look at something. It turned out to be 100 or so pages of notes – typed out by McIlvaney’s partner, Siobhan Lynch, and including lines such as: “I think this is the word but I can’t read his handwriting!”

“I think Willie was thinking about bookending Laidlaw with a prequel and a sequel – they were going to be Laidlaw’s first and last cases but there was not nearly enough to do anything with the latter, sadly,” says Ian. However, after some hard thinking, he decided to have a go at the prequel, set in Glasgow in 1972.

“I’d never done historical fiction before,” he admits. “How much was a newspaper, how much was a pint? I don’t know. I was 12. But I read and re-read the Laidlaw books until I felt I had a sense of Willie’s voice. Then I went to the library and looked at Glasgow newspapers from 1972 for as much detail as possible and I had street maps from the period.”

The resulting book is unique, and already enjoying rave reviews. It introduces the unconventional detective and the crime bosses he tangles with in the later works as he investigates the murder of a crooked lawyer. Curiously, for Ian, one of the greater challenges was setting it in Glasgow. “Rebus goes there and doesn’t understand it. A bit like me,” he laughs. “I’m way out of my comfort zone. Edinburgh’s more strait-laced. People don’t talk to each other the way they do in Glasgow, where strangers will chat to you in the chip shop or bus queue.

“But you don’t want to say the wrong thing in the wrong pub. As Willie himself would say, you might end up getting a knife or a headbutt.” Despite his initial misgivings, the novel is an undoubted triumph and can only burnish the glowing reputation of both authors.

Ian’s writing wields seamlessly with McIlvanney’s. He adds: “The nicest compliment I’ve been paid was by Siobhan who wrote me a handwritten letter saying, ‘I couldn’t see the join, where it stopped being Willie and started being you’, which tells me I successfully captured his voice. I was delighted. The second thing she said, which put an arrow through my heart, was, ‘It was like he was in the room with me’.”

The Life and Crimes of America’s Original ‘Welfare Queen’

Around the World With Mao Zedong