I baked myself better! 14-year-old Kitty Tait was deeply depressed — until her dad suggested baking. The effect was transformative: her shop’s a hit and her bread sells out in minutes

Katie and Al Tait first realised something was seriously wrong with their daughter Kitty during a large family party. The funny, chatty, bouncy 14-year-old had become ‘subdued, distracted, pale and sad’.

Diagnosed with depression, Kitty’s mental state went rapidly downhill. She could no longer cope with leaving the house, wore the same clothes every day and dropped out of school. Even washing her hair was unbearably painful for her. Someone — her parents, or her brother and sister — had to be with her at all times.

Kitty couldn’t explain what had happened, just that ‘my mind whirred and whirred until I thought I would do anything to stop it’. 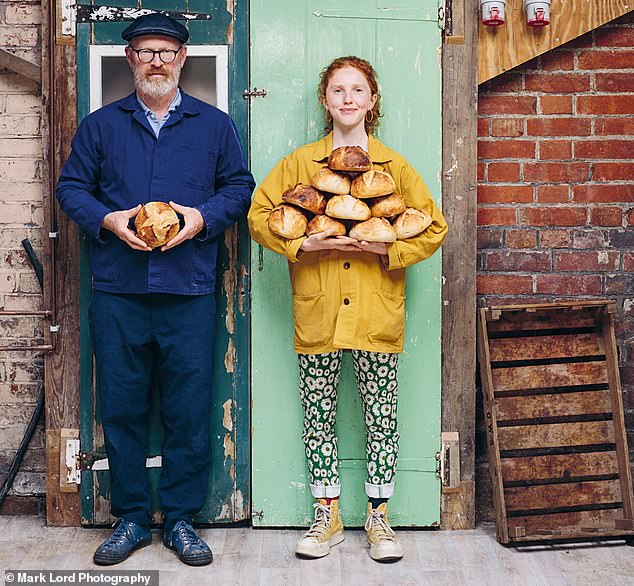 Kitty Tait, 17, and her dad Al (pictured) have mastered not only baking but Kitty’s mental health. She was diagnosed with depression and the age of 14 and has since found solace in baking

The Taits tried every strategy they could think of to help Kitty get through. Gardening, sewing and painting didn’t work. But when Al, a teacher, baked a loaf of bread, she showed a spark of interest — the first in a long time.

Soon Kitty was baking every day, turning out more bread than the family could eat. ‘I started to live for that small window of time each day when I could bake,’ she writes.

Her output was limited by the family’s oven, until generous neighbours offered her the use of theirs as well. Kitty mixed such huge quantities of dough that she ran out of bowls in which to prove it; at times her bicycle helmet had to be pressed into service.

Word of her exceptional bakes spread through the town of Watlington in Oxfordshire, and orders poured in. When she was baking, her father writes: ‘I would see a smile… uncluttered by the thoughts crowding her head.’

Father and daughter became obsessed with producing the perfect sourdough loaf and Kitty was so passionate about her starter — the live fermented culture of fresh flour and yeast needed to make sourdough — that she nicknamed it Ferguson and took to sleeping next to it at night.

Her parents stoically accepted Kitty sleeping on the kitchen bench instead of in her bed. Looking after the starter made her feel ‘needed and responsible… it made my brain feel easier’. 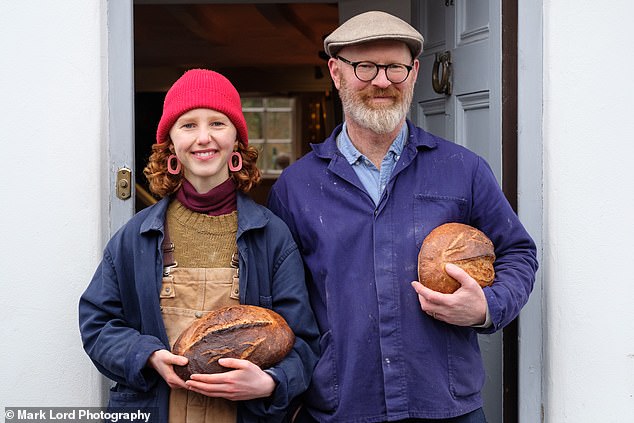 For all the solace she found in baking, Kitty’s mental health was still very fragile, so Al gave up his teaching job to be with her and assist full-time with the baking. The whole family rallied round to support the enterprise, even though they could barely move through the kitchen for all her new baking equipment. ‘Kitty was the Formula 1 racing driver and we were her pit crew,’ Al writes.

A friend suggested they try doing a pop-up shop and Kitty spent 24 hours feverishly making bread and pastries. Everything sold in under half an hour and the shop became a regular Saturday event.

Kitty’s repertoire expanded, fuelled by her talent for devising recipes. At Christmas, she made ‘sticky toffee brownies, bacon and pecan swirls, drunken Eccles cake made with brandy-soaked fruit, and mince pie croissants’.

Her longing to visit other bakeries and meet professional bakers helped her overcome her fear of leaving familiar surroundings. She travelled to Paris to sample French patisserie and to Copenhagen to learn to make rye bread. Yet when her parents persuaded her to take two weeks off from baking to rest, her mind went haywire again. 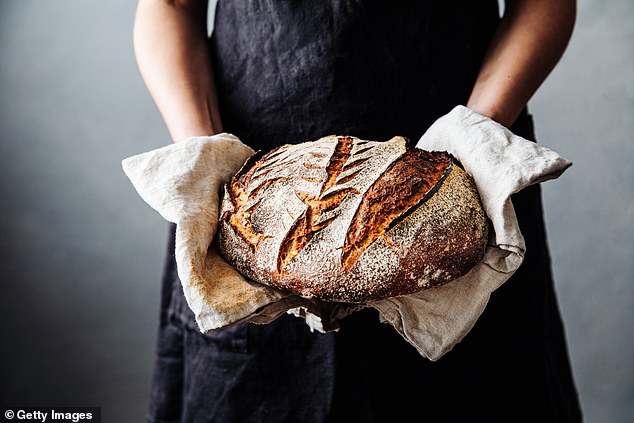 When Kitty and Al decided to open a full-time shop, Orange Bakery (the actual baking is done in what used to be Watlington’s Scout Hut), locals chipped in to crowdfund the venture

Whenever she felt dark thoughts crowd in, she calmed herself by concentrating on her baking. In the middle of one panic attack, she put her hands into a bread mixture and ‘I could feel my breath starting to slow again, and my cheeks stopped flaming’.

Kitty’s anxiety gradually began to recede. She stopped sleeping in the kitchen and her father noticed that ‘her ear-to-ear smile began to make a regular return’.

Despite the sadness underlying Kitty’s condition, there are times when Breadsong — the title is Kitty’s name for the crackling, hissing sound of a loaf expanding in the oven — reads like an Ealing comedy.

Watlington, which claims to be the smallest town in England, has a strong sense of community and gathered Kitty to its bosom, supporting her every step of the way.

The freshly baked bread was left for collection in a cupboard outside the Taits’ house, and Kitty’s customers often left flowers and presents for her such as bags of quinces, along with ‘notes and drawings, boxes of eggs… you never quite knew what would be there when you opened the door at the end of the day’. 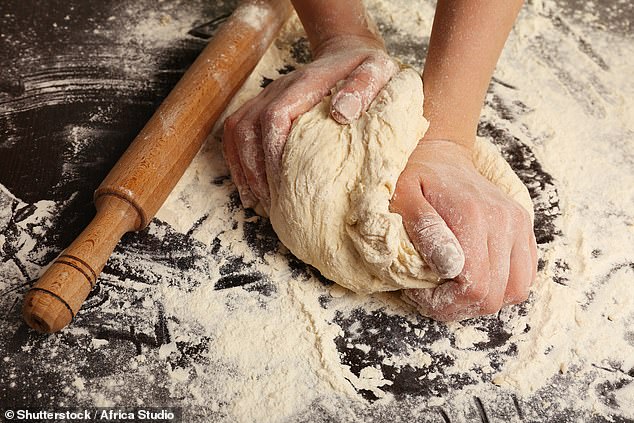 Al’s life has changed radically, too: he is now a full-time baker, a career switch he had never anticipated before Kitty’s illness

When Kitty and Al decided to open a full-time shop, Orange Bakery (the actual baking is done in what used to be Watlington’s Scout Hut), locals chipped in to crowdfund the venture. During lockdown, Kitty and Al repaid the favour, opening the bakery six days a week and doubling their production. ‘Feeding everyone became a big part of lockdown for me,’ Kitty says.

She never did go back to school, with the agreement of her teachers, but at 17 she is running her own thriving business, doing internships with other bakeries to hone her skills and is on an even keel again.

‘I can get low and tired and sad, but it passes,’ she says.

Her father believes that ‘the part of Kitty’s brain that makes life difficult for her is also probably the same bit that gives her extraordinary drive and determination and a way of seeing life differently’. 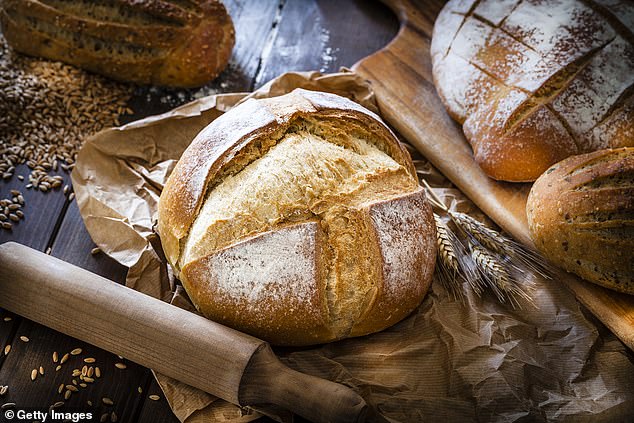 What makes this book work so well isn’t just the recipes, but the double act of Al and Kitty, who take turns to tell their story with insight, humour and deep affection on both sides

Al’s life has changed radically, too: he is now a full-time baker, a career switch he had never anticipated before Kitty’s illness. This isn’t the first book about the therapeutic qualities of baking; ten years ago, the best-­selling author Marian Keyes, who has suffered from debilitating depression, wrote a charming cookery book called Saved By Cake. The second half of Breadsong is a collection of Kitty’s favourite recipes, from miracle overnight white loaf to her signature blondies with a Marmite glaze.

What makes this book work so well isn’t just the recipes, but the double act of Al and Kitty, who take turns to tell their story with insight, humour and deep affection on both sides.

Kitty writes: ‘I look back at that 14-year-old who could not make any sense of why she existed and I want to show her where she is now.’

Breadsong will leave you with a warm glow; like a crusty homemade loaf straight from the oven, I found it irresistible.