The title character in Douglas Stuart’s debut novel, “Shuggie Bain,” at one point finds his mother passed out in their Glasgow apartment. He gently turns her head to the side so that she doesn’t choke on her vomit, places a bucket by the bed and sets out three mugs next to her — one with tap water for her dry throat, one with milk for her sour stomach, and one with flat, leftover lager to ease her shaking limbs.

“He knew this was the one she would reach for first,” Stuart writes.

It’s a wrenching realization. But Shuggie’s almost maternal tenderness toward his emotionally volatile mother, and his love for her despite her failures, helps him endure their hardscrabble existence.

Stuart based the novel on his own childhood in Scotland, as the lonely youngest son of a single, alcoholic mother. Still, he sees Shuggie’s story not as a tragedy, but as a tale about unbreakable filial bonds.

“For me, ‘Shuggie Bain’ is a love story,” Stuart, 44, said during an interview on a drizzly day in downtown Manhattan this month. “It’s about love before it’s about addiction.”

When the book came out in February, it had a warm but rather quiet reception. Now, it is being celebrated as one of this year’s most accomplished debuts.

It was named as a finalist for both the National Book Award and the Booker Prize, two of the most prestigious literary prizes in the world. It has drawn comparisons to D.H. Lawrence, James Joyce and Frank McCourt.

Stuart, who lives in the East Village with his husband, Michael Cary, a curator at Gagosian who specializes in Picasso, said he is “absolutely stunned” by the novel’s success. When he first started writing more than a decade ago, Stuart was working 12-hour days as a senior director of design at Banana Republic, jotting down scenes and bits of dialogue in his spare time almost as a form of therapy. 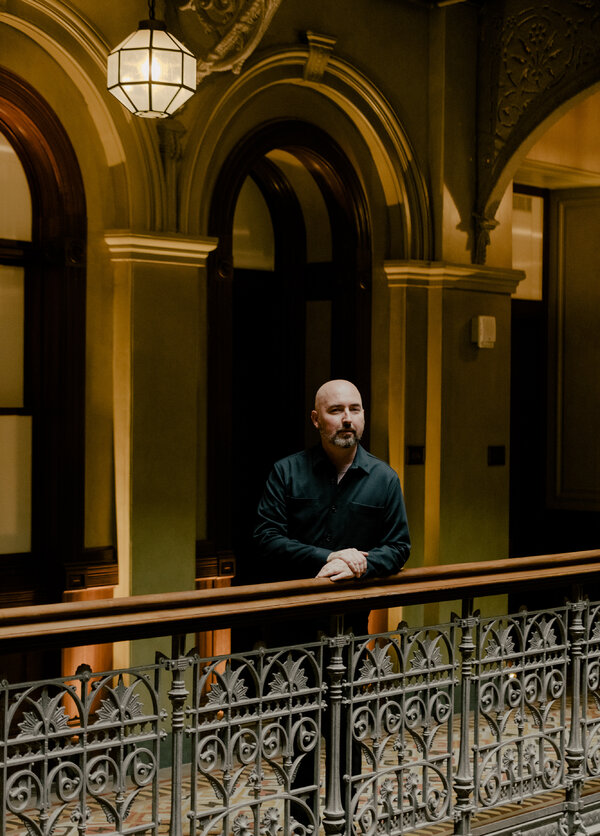 “I sat down to write ‘Shuggie’ without knowing what I was writing,” he said. “I wouldn’t allow myself to believe I was writing a book, because it was too intimidating.”

A portrait of a struggling city, community, family and woman, “Shuggie Bain” unfolds in the economic and social stagnation of 1980s Glasgow, after the region’s shipbuilding, mining and steelwork industries collapsed. Stable, working-class communities became destitute, leading to widespread poverty and addiction.

In this harsh world, Shuggie feels like an outcast. His mother is ostracized by the local women and preyed upon by the men; Shuggie is bullied by his classmates for being gay.

The novel caused a stir in Scotland. “New York fashionista uses Glasgow’s Sighthill as inspiration for novel,” the Daily Record, a Scottish newspaper, trumpeted in August. Nicola Sturgeon, the first minister of Scotland, tweeted a photo of the book, and congratulated Stuart on his Booker nomination.

“Douglas is incredibly entrenched in that great Scottish working-class tradition of storytelling, but he’s coming at it from being an outsider in your own country,” he said. “He’s bringing a queer sensibility to it.”

As a boy growing up in public housing, Stuart rarely saw books at home. His mother had shelves of what looked like leather-bound classics, but they were decorative, faux-leather cases for video cassettes of movies and soap operas.

Like Shuggie, Stuart had a lonely childhood. The youngest of three, he felt like an only child, as his older brother and sister were teenagers when he was born and found jobs to escape the chaos at home. He barely knew his father, who left when Stuart was young. Stuart often functioned as a caretaker for his mother, who would black out from drinking and sometimes try to harm herself.

He occasionally skipped school to look after her. On the days that he went, he was shunned by the other boys and attacked for being too “poofy.”

“I was effeminate, I was fey, I was precocious,” Stuart said. “There was no way to identify as gay, because I was too young, but I was different.”

His mother died of alcoholism-related health issues when he was 16. He lived with his older brother for a while, then moved into a room in a boardinghouse at 17.

Books became a refuge. Stuart devoured works by Thomas Hardy, Irvine Welsh, Agnes Owens and Iain Banks, and became the first person in his family to graduate from high school. He wanted to study English literature in college, but was discouraged by a teacher who told him the subject wouldn’t suit someone from his background. He decided to study textiles instead, earning a bachelor’s degree from the Scottish College of Textiles and a master’s from the Royal College of Art in London.

“He didn’t go around saying ‘poor me,’ and I’m sure a lot of people didn’t realize his circumstances,” said Sheila-Mary Carruthers, a professor of design who taught Stuart when he was an undergraduate. “He’s a very determined personality, not in a very assertive, ghastly way, but in a positive way. He just gets on with it.”

A Calvin Klein representative offered Stuart a job after seeing his work at a school fashion show. He moved to New York City at 24 and for around 20 years worked for global brands such as Calvin Klein, Ralph Lauren, Banana Republic and Jack Spade.

When he first started writing, he treated it as a private creative outlet, a way to grapple with the residual trauma of his childhood. Whole scenes came flooding back. His first draft was 900 single-spaced pages.

Stuart signed with the literary agent Anna Stein, but when they shopped the book, more than 30 editors passed. Many told Stuart it would be too hard to get Americans interested in a novel about a gay Scottish boy and his alcoholic mother.

Then Stuart met with Peter Blackstock, a senior editor at Grove Atlantic, who was determined to publish “Shuggie Bain.” It was the only offer Stuart got.

“It kind of had this classic feel to it,” Blackstock said. “But I felt like I hadn’t really read this story of a queer, working-class boy’s childhood before.”

Grove Press released the book in February, but just as buzz and word of mouth began to build, the pandemic hit the United States. Grove had shipped some 7,000 copies to bookstores, but with many brick-and-mortar locations closed, only around 1,000 hardcover copies sold in the first two months after publication, according to NPD BookScan.

“It was really tough timing for Douglas,” Blackstock said. “Just as the book was getting its momentum from great reviews, it got put on pause, and that was difficult.”

Then, this fall, awards nominations began to pile up, and “Shuggie Bain” got a second life.

In September, it was listed as a finalist for the Kirkus Prize and made the cut as one of six finalists for the Booker Prize, over works by celebrated authors like Anne Tyler and Hilary Mantel. Booker judges called it “an amazingly intimate, compassionate, gripping portrait of addiction, courage and love.” In October, it was named one of five fiction finalists for the National Book Award.

Grove moved up the publication of the paperback edition from December to Oct. 13 and has printed 30,000 copies, with another 10,000 on the way. If Stuart wins the Booker or the National Book Award in November — or, in an unprecedented coup, both — Grove plans to print another 50,000 copies.

Stuart dedicated “Shuggie Bain” to his mother. In a roundabout way, she was the first person who encouraged him to write.

Some nights when she was drunk, she would dictate her autobiography for him to take down, he said. She never got past the dedication, which she always made out to one of her role models, Elizabeth Taylor — another glamorous, melodramatic woman who was unlucky in love.