Richard Linklater’s 1991 breakthrough film, “Slacker,” starts with the director himself, riding a cab at dawn into Austin, Texas. He babbles about various dreams he’s had. He talks about a dream he had last night. A dream where nothing much happened. He says he should have stayed at the bus station. He finishes his cab ride.

The film continues on from him to one character after another. Along the way we learn about the human heart, and U.F.O.s, and paranoia. Someone tries to sell Madonna’s Pap smear. We witness murder and art. We see time being wasted. We see attempts to connect fail. We see other people battle to stay isolated. By the time we reach the last of the movie’s 97 minutes, we’ve taken a core sample of one city’s fringe, underground, aboveground, covert and overt soul. It was an amazing experience for me the first time I saw it at San Francisco’s Red Vic theater in 1992. And it’s paid dividends the six or seven times I’ve watched it since. New details emerge in the background. Monologues I thought were profound in my early 20s seem silly in my 50s. Dialogue I thought was filler in my 20s now seems profound. I can’t wait to watch it in my 60s.

Melissa Maerz’s “Alright, Alright, Alright: The Oral History of Richard Linklater’s ‘Dazed and Confused’” had the same effect on me when I read it. This is a spoken, as-told-to memoir of (mostly) everyone who was involved in the making of Linklater’s 1993 follow-up to “Slacker.” A loose, hormonal slice of ’70s Texas teenage life that’s become a modern coming-of-age classic. Telling the story of its creation sounds like a simple proposition, yes? It even begins in “linear” fashion. The first chapter and most of the second are about the cast’s memories of the film — its effects on their careers, how its traces linger in their lives today, all these decades later. 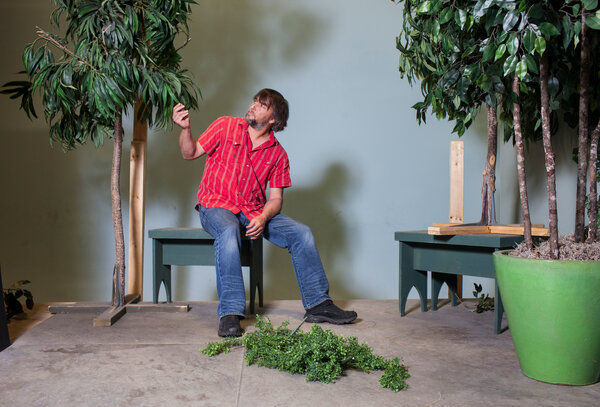 But near the end of Chapter 2 (“Old People in Your Face, [Expletive] With Who You Are”), we start looping back to Linklater’s time growing up poor in Texas. His life experiences — things that happened to him, to his friends, and tales he overheard about legendary local figures that may or may not have been true — influenced the story and character choices years later for “Dazed and Confused.” Some of that influence hit too close to home for some actual residents of Huntsville, Linklater’s hometown. In another chapter, “Amazed and Confused,” we hear about a hilarious and half-baked defamation lawsuit brought on by the real-life inspirations for Slater, Wooderson and “Pink” Floyd. “It felt like Rick must’ve been in the woods, and instead of partying with us, he was taking notes,” says the real, rueful Slater.

And suddenly in Chapter 3 (“The Hardest Working Slackers in Austin”) we get a mini-oral biography of the making of “Slacker.” The larcenous creativity that went into making a movie with meager resources is delightfully and succinctly recounted. “I had seen my sister Trish get married, and then she got divorced a couple of years later,” says Linklater. “So there I was, in my late 20s, telling my parents, ‘You know those thousands of dollars you paid for Trish’s wedding? Well, you could just give me that money for “Slacker.” Think of it as the marriage I’m never going to have.’ That was my pitch, and it worked.”

The seemingly formless and improvised “Slacker” (Don Stroud, an actor on “Slacker” and stand-in on “Dazed,” asserts: “You didn’t really audition. You just talked”) hit a nerve at the dawn of the ’90s. It’s a movie about the internet before there was an internet. It’s a movie about the hidden fracturing going on in an American society that was fooling itself about how it had finally cohered. And, most of all, it was about being young and directionless — of the joy and terror of that time in everyone’s life.

So now it’s the fever of a dozen new roads being opened before Linklater in Hollywood. He’s the goose that laid the golden zeitgeist, which in show business can last a year or 10 minutes. And all the studio snouts are sniffing his scent. And what does he do at his crossroads moment? Well, the title of Chapter 4, “How to Pitch an Unpitchable Movie,” should give you an idea.

Linklater remembers meeting with Jim Jacks, who would go on to be one of the producers of “Dazed”: “We had just had lunch when Jim introduced me to Tom Pollock, the head of Universal. We walked over to his table, and he was like, ‘Oh yeah, “Slacker.” That made some money, right?’ I don’t think he’d seen it, but he recognized the title from looking at Variety.

“And I was like, ‘Yeah, it was a success! I’m Mr. Money. When you think of me, think of positive box office money!’”

But Pollock seeing “Slacker” was a different story.

Linklater says: “Unfortunately, Tom Pollock saw ‘Slacker’ at one point, and he was like, ‘What the [expletive]?’ He thought ‘Slacker’ was this weird, arty film.

“Jim told Tom, ‘How do you know “Slacker” isn’t Rick’s “THX 1138”?’ That was George Lucas’s weird art film that didn’t make any money, and he made ‘American Graffiti’ after that.”

Nice for a fellow movie nerd to have another movie nerd’s back. Universal agrees, the cast assembles in Austin, and we hurtle into “Part II: The Shoot” as if we’re in Wooderson’s 1970 Chevy Chevelle: “4:11 Positrac outback, 750 double pumper, Edelbrock intake, bored over 30, 11-to-1 pop-up pistons, turbojet 390 horsepower.”

Maerz, a former staff writer at Entertainment Weekly and The Los Angeles Times, spoke with almost 150 people to assemble the narrative. There are hookups and rivalries, oceans of alcohol and forests of weed consumed, cliques and alliances — and everyone has their own side of the story. And everyone, of course, insists they’re telling the truth. It makes for lively, sometimes cringe-y reading (the chapter about Shawn Andrews should be printed as a pamphlet and handed out to young actors with too much hubris). It’s gossipy and funny and sometimes wistful and sad, but it’s page-turning. Yes, you find out precisely where “Alright, alright, alright” comes from. And in true, Linklater-esque meandering fashion, you find out about odd Texas traditions like moon towers, “freshmanizing” and the parking spots to avoid at the Sonic.

I haven’t even touched on the postproduction battles about test screenings, marketing and music rights (to this day Linklater dreads meeting Robert Plant in person after some, uh, choice words in The Austin Chronicle about Zeppelin refusing the use of one of their songs). There was also the usual finger-pointing when the film flopped and the glory-grabbing when “Dazed” reached cult status a decade later. That’s all in Parts III and IV: “The Comedown” and “The Legacy.”

For a film lover like me, “Alright, Alright, Alright” is an endless feast of facts and revelations. I’m gonna guess that for the casual filmgoer (and even someone who’s never seen “Dazed and Confused”) it will be fascinating just for the thrill of reading older people looking back with joy, bewilderment and sometimes anger at a time when they were not only young, but when their youth blazed. And the fire was caught on film. For better or worse, forever.