You will have a hard time getting through Thomas Dyja’s “New York, New York, New York,” mostly because there is an idea on every page, if not in every paragraph — and usually attached to a perfect line from the host of sources he has collected for this history of New York City over its last four rollicking decades.

Here is the journalist Michael Tomasky fretting that “there’s only so much wholesomeness New York can take,” the graphic designer Tibor Kalman advising us that Times Square “should be a zoo, like the rest of New York, but a well-maintained zoo instead of a depressed, unemployed and crack-smoking kind of zoo,” and the philanthropist Andrew Heiskell promising a crime-free Bryant Park: “All the hiding places have been eliminated.” Here is Spy magazine headlining Rudy Giuliani as “The Toughest Weenie in America,” Jules Feiffer calling Elaine’s “a men’s club for the literary lonely,” the writer Lewis Lapham diagnosing money as “the sickness of the town” and the architecture critic Ada Louise Huxtable calling Harry Helmsley’s Palace Hotel tower “a curtain wall of unforgivable, consummate mediocrity.” 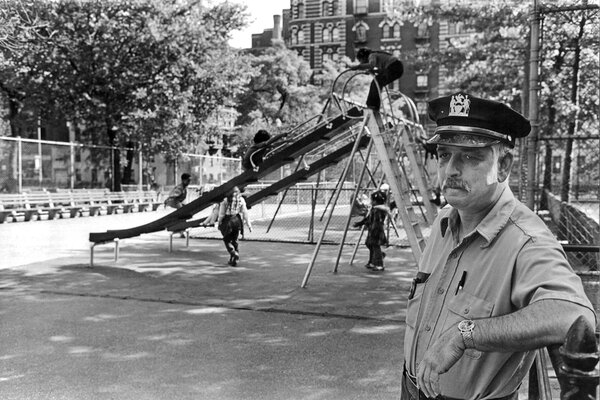 And from Dyja himself: “In the Meatpacking District, both sides of beef and gay men hung from hooks”; hedge funds “meant leaving the rich to their own devices; historically, a dangerous idea,” and “while the smart money had been going to real estate, so had the stupid money.” “Bruce Ratner believed he made money doing good — the story many in New York had been telling about themselves for a decade”; Richard Ravitch “had the burly sense of purpose found in fighting mammals of the Upper Midwest”; Jeff Van Gundy “led the Knicks to the N.B.A. finals with all the ugly luck of finding a winning scratch-off on a bodega floor”; Al Sharpton “on the face of it … had a deathbed conversion, but really he’d just rebranded.” And “of all the things Abe Beame can be blamed for, Donald J. Trump is by far the worst.”

“New York x 3” begins on Feb. 14, 1978, designated “I Love New York Day” for the ubiquitous jingle introduced that afternoon, part of a last-ditch publicity campaign to revive a city that even those who loved it feared was dying. But New York wasn’t dying, and why it wasn’t — the women and men, policies and plans, trends and revolutions in everything from music to technology to public spaces to private desires that transformed it — is Dyja’s story. What he has produced is a tour de force, a work of astonishing breadth and depth that encompasses seminal changes in New York’s government and economy, along with deep dives into hip-hop, the AIDS crisis, the visual arts, housing, architecture and finance.

It’s quite a high-wire act, and one that Dyja, who has previously written a cultural history of Chicago, pulls off without ever losing the rush of his narrative. He slips in telling statistics with the skill of a banderillero, using them always to secure a point and move his story forward. Thus we learn that 60 percent of the African-American population in Harlem left between 1950 and 1980. That there were about 86 publishing houses in New York at the start of the 1980s and that “between 1979 and 1989, 2,500 new magazines came out.” From the start of Ronald Reagan’s term to 2000, “the top 1 percent had gotten 86 percent of the stock gains”; and New York City lost over 100,000 single-room-occupancy units at roughly the same time New York State’s psychiatric units dumped 50,000 inmates back on the streets. At the nadir of the crack epidemic, “some 150,000 New Yorkers were plying the drug trade,” and in 1990 “2.28 million Black men were jailed in the U.S. while 23,000 earned a college degree.” And that “by the end of 1983, New York’s entire contribution to AIDS services and education totaled $24,500.”

Dyja’s narrative starts with the decline of what he calls, with only faint irony, “The Workers’ Paradise,” the legendary working-class/middle-class city that emerged after World War II with a million manufacturing jobs and what was — for America — an unrivaled social welfare state. But even this fabled New York, as he notes, “existed during a period of exclusion” for most citizens who did not happen to be white, and crumbled under the batterings of deindustrialization, corruption, mismanagement and the usual neglect from Washington and Albany. Its aura lingered on, though, complicating things for those trying to forge a new city. (When a woman urged Ed Koch to “make the city what it once was,” the mayor told her with characteristic bluntness, “Lady, it was never that good.”)

What to do? Dyja frames the struggle as a fundamental shift in how New York operated, “from mass society to networks,” with “the collective world of unions, borough machines, the archdiocese and even the Mob” giving way “to one of individuals who define themselves primarily by the networks they belong to.” As he neatly puts it: “Information took over from Industry.”

I’m not sure this is as much of a change as Dyja believes it to be — but then, this is a good book to argue with. I, for one, don’t think that Christo and Jeanne-Claude’s “The Gates” did a thing for Central Park. I believe Dyja exaggerates wildly when he describes New Yorkers as so shellshocked by 1990 that they “turned their self-imprisonment into a trend; they became couch potatoes.” And as someone who has lived his entire adult life in New York, beginning almost two years before “I Love New York Day,” I vehemently deny the claim, forwarded from the Koch parks commissioner Gordon Davis, that Urban Park Rangers had to “help New Yorkers relearn how to behave in the city at large.” The acting out that Dyja and Davis refer to was largely the doing of the young and the crazy, and if the rest of us did not always interfere it was mostly because of a sentimental attachment to things like our teeth.

But go have your own argument with Dyja; you will enjoy it. In our current atmosphere of political fanaticism and fantasy, his reasoning is a joy, as are his sense of nuance and his willingness to question his own assumptions. He elides what he calls the “morality play” that has warped most arguments about New York for the last 40 years, giving each mayor his due — and his skewering — with astonishing objectivity, and each genuine reformer the benefit of the doubt. He looks at the city from all points of view, from that of the poorest outsiders to the Masters of the Universe, and best of all he brings to life the volunteers, everyday New Yorkers, who stepped forward to save their city when it needed them most.

What they accomplished was remarkable, as Dyja recognizes, a New York that was and is — at least pre-Covid — wealthier, healthier, safer, greener, longer-lived and more modern than it has ever been. The city has absorbed an entire Philadelphia’s worth of immigrants, from all over the world, more than 1.5 million new Americans since 1978, two-thirds of whom live in Brooklyn and Queens and have transformed those boroughs into the dynamic places they are today. They are “half of the city’s accountants and nurses, 40 percent of its doctors, real estate brokers and property managers.” Dyja celebrates how the city has indeed managed to monetize its culture in a postindustrial world, between tourist sites, high art and hip-hop, “New York’s most globally influential cultural invention.”

And yet, for Dyja, New York has become in too many ways a victim of its own success, or “oversuccess,” as Jane Jacobs called it. In the end, “too many good ideas, practical strategies and necessary temporary measures became permanent, inflexible policies applied to a place in constant flux.” A “proactive” police department that he credits with helping crush crime has devolved in many cases into what he calls racist “security guards and mercenaries” abusing their power. Runaway real estate speculation created a “Luxury City,” with more and more of it privatized by parks “conservancies” and business improvement districts, housing more and more unaffordable, small businesses steamrollered by chains and mega-developments, and the Upper East Side reduced to “a kind of jewelry store now,” with “a third of the apartments between 49th and 70th between Fifth and Park … vacant 10 months a year, owned by shell companies and L.L.C.s.”

The original sin was tying so much of New York’s fate to Wall Street, a dependence that has grown exponentially over the years, and that has set the city’s economy on its seemingly endless roller coaster ride. A trillion dollars “evaporated” after the 1987 stock market crash, nearly $4 trillion after the 2000 slump. And at the same time, like a bad dream, the city’s poverty levels have remained intractable, today “around 20 percent, with another 20 percent highly vulnerable” — or 3.4 million people in all — and “almost 50,000 people sleeping on the streets any given night.”

“The result” — well before the pandemic — “was a city flush with cash and full of poor people, diverse but deeply segregated, hopeful yet worryingly hollow underneath the shiny surface,” Dyja declares.

What is to be done? Dyja sees the need for another reinvention of New York, though he offers no easy answers — probably because there are none. He can counsel only that which has worked best, when it has been tried, which is selflessness, moderation, involvement, empathy, creativity; “a New York built on a bedrock of justice, not just noblesse oblige.” But he has already, in this outstanding work, done all that a historian can do to light the way forward, by so vividly illuminating the past.

'When someone's truly listening, you get this feeling where you're totally in sync' – author Kate Murphy