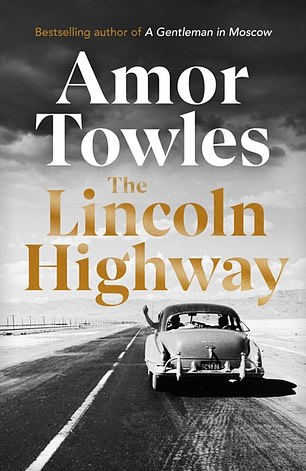 Amor Towles’s third novel is fantastic! Set in 1954, over a wayward ten days, it follows the adventures and misadventures of kind-hearted, hot-tempered Emmett Watson, recently released from a juvenile work farm, and his earnest and precocious eight-year-old brother, Billy, who are about to start a new life after the foreclosure of their family farm in rural Nebraska.

Emmett is keen on California, but the unexpected arrival of two fellow inmates thwarts the entire enterprise. Sweet, privileged, drug-addicted Woolly, and Duchess — ‘fast-talking, liberty-taking, plan-upending paradox’ — have an alternative escapade in mind — the retrieval of a large sum of money stashed in Woolly’s grandfather’s safe.

They ‘borrow’ Emmett’s car, leaving the siblings to ride the rails on a cross-country adventure that takes in revenge, unexpected encounters and an emotional revelation.

Wise, witty and entirely wonderful, this is a superlative slice of storytelling.

At the heart of this unbearably sad, but ultimately uplifting novel is the unbreakable bond shared between three sisters, who endured the horrors of the Nazi concentration camps, but went on to make new lives in Israel with their cherished children.

Based on the experiences of Holocaust survivors Cibi, Magda and Livia Meller, whom Heather Morris met when she was promoting her bestselling novel The Tattooist Of Auschwitz, this re-imagines their harrowing, hopeful story.

Livia and Cibi were in Auschwitz-Birkenau in 1942, Magda in 1944; the sisters endured the camp’s inhumane savagery, a death-march across war-torn Europe and an unhappy journey back to their unwelcoming, anti-Semitic home town in Slovakia. It’s a gruelling read, but the vivid resilience of the girls, their constant care and affection for each other, is immeasurably comforting. There are three timelines in the latest brilliantly researched novel from the author of The Botanist’s Daughter — Burma in 1945, London and Ireland, 1999, and a brief sojourn in 1976, where an unknown woman steals several Japanese netsukes (miniature sculptures), including the valuable ivory fox-girl, from an Oxford museum.

Kayte Nunn delightfully weaves these strands together, teasing out the connections between the little known Wasbies (Women’s Auxiliary Service, Burma) who served up tea and sandwiches from mobile canteens on the front line, and Beatrix, an elderly widow who wants to sell her late husband’s collection of Japanese Art.

Accompanied by Olivia, an unpaid assistant to an art dealer, Beatrix leaves her ramshackle home in the English countryside for a more soigné gathering in Galway, where friendships are renewed, old trauma is revisited and long-held secrets revealed. Hugely engaging.

The Problem of Wartime Guilt and Its Long Life Span

Can You Make a Page-Turning Thriller Out of the Ebola Crisis?