The question has confounded many: How does Pakistan stay alive?

The 73-year-old nation born of a bitter postcolonial divorce has heaved through humiliating defeats, careened from coup to coup and stubbornly endured despite relentless forces working to unweave it.

The New York Times foreign correspondent Declan Walsh is the latest to try to answer that question. In his new book, “The Nine Lives of Pakistan: Dispatches From a Precarious State,” he pulls from years of contact with sources on the ground, presenting nine narratives — each given its own chapter — to paint a vivid, complex portrait of a country at a crossroads.

This nuclear-armed nation is today the fifth most populous in the world. Its subcontinental perch grants it strategic geopolitical importance. And though its past wars with India seem to consume Pakistan’s almighty army leaders, for the past two decades it’s largely been America’s war in neighboring Afghanistan that’s demanded their attention. 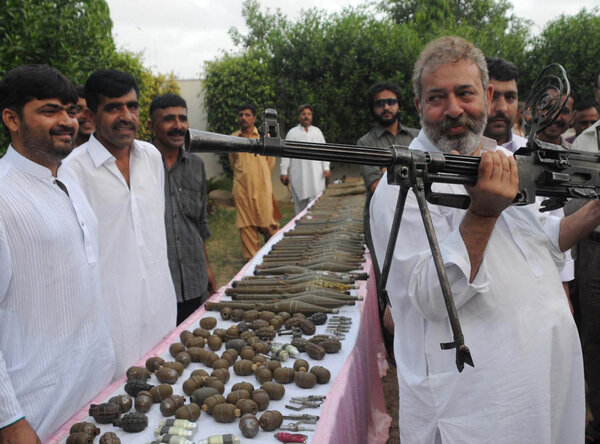 Walsh spent nearly a decade living in and covering Pakistan, first for The Guardian, then for The Times. His tenure coincided with some of the country’s most turbulent modern years: fraught elections, assassinations and military rule; a war next door and within; and a tenuous alliance with the United States fraying to the breaking point, particularly after American Special Forces found Osama bin Laden hiding inside Pakistan, and killed him.

[ Read an excerpt from “The Nine Lives of Pakistan.” ]

During Walsh’s years in Pakistan, he produced news story after news story, until, in 2013, he became one himself.

He was unceremoniously kicked out of the country by the government, presented the decision by police officers who showed up at his Islamabad home in the middle of the night. Among the group was a bearded man in civilian clothes, who handed him an envelope marked “By Special Messenger,” containing a letter giving him 72 hours to leave. “The Special Messenger,” Walsh writes, “flashed me an awkward smile and then, in the finest tradition of subcontinental bureaucracy, politely asked me to sign for my own expulsion order.”

It’s here that Walsh begins his book, with his own departure, a personal mystery that needs solving: What was it about his work that led the authorities to throw him out?

Most of the “nine lives” he goes on to profile were previously subjects of Walsh’s reporting. The two exceptions are an intelligence source he tracks down to try to understand his expulsion, and the country’s founder, Muhammad Ali Jinnah. Jinnah is Pakistan’s original enigma: a thoroughly westernized, secular barrister who fought for a Muslim homeland after Partition. Walsh offers Jinnah’s vision of what Pakistan could be — a nation of faith, unity and discipline — and then proceeds to document just how far from that vision it has moved.

Walsh’s writing is elegant and expressive. It does what the best foreign correspondence should: transport the reader. Chaudhry Aslam, a Karachi policeman profiled in 2011 by Walsh as “Pakistan’s toughest cop,” along with the teeming city of 20 million he policed, takes robust form through Walsh’s words. He writes of the city at night after “the last rickshaws skittered home along streets bathed in flickering amber light” and of Aslam’s office, which “had the gleam of a mortuary and the furtive bustle of a mobster’s den.”

In Lahore, Asma Jahangir, a diminutive human rights lawyer with a reputation for speaking unvarnished truth to power, comes alive through Walsh’s precise, observational reporting, her “rapid-fire sentences flicking between plain English and legalese as she pulled on beedis — thin, hand-rolled cigarettes of a kind typically used by poor Pakistanis.”

Deep in the restive Balochistan Province, home to a separatist movement that still bedevils Pakistan’s powerful military, Walsh introduces us to a local chieftain, Nawab Akbar Shahbaz Khan Bugti — “a tribal aesthete, poetry lover and insufferable snob,” who, “in this lost corner of Pakistan … was as close to a deity as you could get.”

War is a constant. Aslam’s war against surging Taliban forces in Karachi. Jahangir’s war against the powerful elite. Bugti’s war against Pakistan’s military (and the army’s brutal campaign to stop it). Every character is fighting on his or her own front line in some way. But a nation is surely more than the wars it fights, and the focus on these particular voices presents a somewhat limited picture.

The selection of overwhelmingly male subjects, most of them in positions of relative privilege and power, further narrows the scope. Pakistan is a country of more than 200 million people. Nearly half are female. By some estimates, almost one-quarter of Pakistanis live in poverty. Except for Jahangir, no woman is given more than a supporting role in the book, and the poor remain largely in the background.

Even the chapter featuring the story of Asia Bibi — a Christian woman who is sentenced to hang for blasphemy, and, after international outrage, later acquitted by the Supreme Court — is told through the lens of a man, Salmaan Taseer, Punjab’s governor, who was murdered by one of his own guards for demanding justice for Bibi.

Walsh beautifully braids in brief history lessons, placing each voice in proper context and feeding a richer understanding for readers coming to the region fresh. To grasp the layered vista on which Aslam operates, Walsh traces Karachi’s growth from quiet backwater to megacity over a full century. He journeys to Punjab Province’s 17th-century Mughal roots before unfurling Jahangir’s fight for justice today. And before diving into Bugti’s battles, he gives us the story of the Balochs’ 12th-century migration and the generations of uprisings that followed.

Peppered throughout are reminders that this work is not easy. It is telling that among the nine profiled in the book, only one subject remains alive; more than half were killed. Walsh functions with the assumption that his lines are tapped, works to avoid intelligence tails and continues to pry into the dark corners that those in power wish he wouldn’t.

Eventually it is that prying that puts him in the cross hairs of Pakistan’s leaders. A supplicant civilian government can’t save him. Diplomatic entreaties fail. The military and its intelligence arm flex their muscles, flick their wrists and have Walsh removed, after a much longer stint than many foreign correspondents in Pakistan.

That investment on the ground is apparent in his book. Despite the fighting, the uncertainty and the sheer degree of difficulty involved in reporting in Pakistan, his familiarity with and fondness for the people and places he covers is clear. Even after he is kicked out, he unsuccessfully petitions officials overseas for one last chance to return: “If nothing else, I wanted closure, an opportunity to say farewell to the country that filled my life for a decade.”