“MEET GARY PANTER,” reads a 1988 ad in The Village Voice for a bookstore appearance in support of JIMBO: ADVENTURES IN PARADISE. The buff title character, cross-eyed and crew-cut, resembles an unhinged Billy Idol about to take the rugby pitch. “It’s an avant-garde adult comic book, about the adventures of a punk Everyman, who defines his generation,” the text claims. “Come by for a signed copy and meet a real comic book hero.”

The public wasn’t biting, alas: Only one person showed up.

Ad and anecdote appear in a new edition of Panter’s beautifully chaotic debut book (New York Review Comics, 103 pp., $29.95). They capture the wobbly position of comics as literature, 30-odd years ago: While Jimbo seethes in the advertisement, a photo of B. Dalton’s prim, bow-tied spokes-nerd smirks in the lower right corner, under the motto “You can call me ‘Books,’” as though marking his turf. Jimbo looks ready to give him a drubbing. The ad glosses over the prickly dissonance of Panter’s art, with its jagged textures, cutup logic and shape-shifting antihero.

Panter was still a student at East Texas State University in the early 1970s when Jimbo first popped up unbidden in a comic story he was writing. A few years later, creator and creation met their moment in the Los Angeles punk scene. “Adventures in Paradise” was a decade in the making (1978-88), with parts originally appearing in the magazine Slash, The L.A. Reader and the seminal New York-based comics anthology “Raw.” Nicole Rudick’s excellent afterword situates Panter as a visionary amid a flood of movements, influences, declarations (his own “Rozz-Tox Manifesto,” originally published as want ads, looked for inspiration in smashed-up capitalism) and artistic fellow travelers. (Among the latter was Matt Groening: Jimbo’s close-cropped hairdo would later inspire Bart Simpson’s.)

For all the various inputs, Panter’s style is singular, even as it changes from page to page. Un-self-conscious work has a certain purity to it, he said in a 1985 interview, “closer to the way, say, twigs would fall on a sidewalk.” His signature “ratty line” — uneven, fidgety, scathing — is on display everywhere, even in the shapes of his letters. Their brute force grounds the outlandish scenarios in and around the decrepit, at times wondrous, city of Dal Tokyo. (“I’m really into marks,” Panter has said — a way of drawing that’s all about getting “somehow closer to the natural.”) At the Feedomat, Cronenbergian eye-stalks take his order telepathically (“Please think me your desire”); chasing a scuttling robot leads him to La Bufadora, a glorious “skateboard-lifestyle” condo complex. A concert by the band Astrochimp Impact Crater (not far from Fat BBQ U.F.O. Clinic) is like a “Where’s Waldo” set in Bosch’s “Garden of Earthly Delights.” 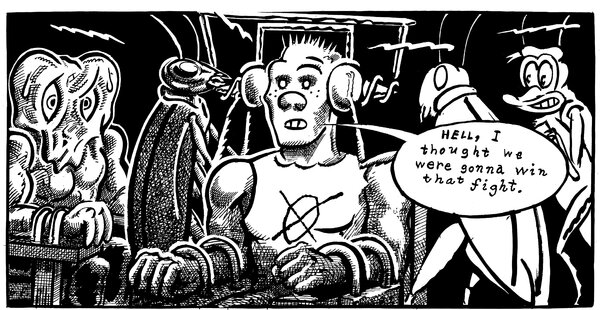 The book shuns a coherent story line, and Jimbo is alternately a cipher, philosopher, lover and brawler. His appearance fluctuates, at times minimalist and goofy, then turning nightmarish as the primitive “Jimbo Erectus.” Traces of our real world find their way to Dal Tokyo, including a Burger King receipt trapped like a fly in amber. Witty metafictional moments abound: Jimbo blithely disses the comic strip “Nancy” as being devoid of sentiment, only to have Ernie Bushmiller’s eternal creation dress him down.

All of Jimbo’s anxieties come to a head in the bravura final section, as black and white gives way to an ocean-blue palette. It begins like the worst dream in history: Jimbo has to defuse a thermonuclear device, a task he’s hilariously unsuited for. What follows is a steady parade of devastation and insanity. Earlier characters undergo horrible distortions; the desperate text starts crawling in the gutters. We last see Jimbo upright but contorted in agony, a St. Sebastian for the atomic age, flecks of neon orange setting the page ablaze. It’s haunting on the retinal level. The final words are “And the sun went,” — capped with what looks like a comma, not a period. The punctuation takes you back to the beginning, where Jimbo asks, “Have you ever had a dream where you knew you were dreaming, but it was so real that you didn’t trust your judgment?” It’s an exquisite loop, a perfect resolution to this monument of disorder.

Jimbo has starred in two other Panter books, but is absent from his latest, CRASHPAD (Fantagraphics, 36 pp., $39.95), a far-out misadventure involving anthropomorphized dogs, a U.F.O. and 2,000 tabs of acid. If Panter drew inspiration from the energy of punk, his ethos was equally formed by “hippie optimism” and headshop literature from Zap Comix to “Cacti and Succulents Handbook.” “Crashpad” kicks off with an eight-page throat clearing, full of enervating gobbledygook (“No relating vision, however glorious, needs hold one prisoner”) and a tumble of psychedelic images. A little of this goes a long way, but it serves as a sort of set-and-setting for the laid-back and psychotic little story that follows, in which a tripping pack of hippie-dogs (fuzzy faces recalling R. Crumb’s Fritz the Cat) is chased by an uptight sheriff. It builds up to a cosmic joke I didn’t see coming — I haven’t been blindsided by a punchline this good since Knausgaard IV.

Bewilderingly, “Crashpad” comes in two formats, packaged together: a regulation-size, stapled comic book, which slips inside a pocket on the endpapers of a sumptuously produced artist’s edition, with gold foil on its cover, that reproduces the original artwork at its full, unreduced size. The story works better at the more intimate scale, and on one level, a $40 admission fee to view a groovy but short work verges on obscene. If we set aside the cynical notion of a money grab, though, there’s a certain stoner’s logic to putting out both at the same time: instantly elevating the ramshackle fable to a holy text.

A little dazed, I found a better explanation in the first line of Panter’s preface: “In a digital world, it may be important to involve oneself with dirt.” We live in a time of technological wizardry, when so many comics are made at least partly on the tablet: colors easily changed, everything airtight, “handwriting” shunted into fonts. It may indeed be important to see the dirt, the marks, the artist’s true hand and deep nature. Publishing these pages in all their oversize glory reveals the human gradations of his inky sky, occasional marginalia, faint pencil often visible underneath the figures.

I realize this is a romantic view of cartooning, written by a noncartoonist. And I know that many great artists swear by the latest drafting technology. But it’s always good to be reminded that there are other ways. That anyone with a pencil can draw or write. That the twigs on the sidewalk might be telling a story worth looking at.

How Close Are Barack Obama and Joe Biden?