Game of Thrones’ ending revealed George RR Martin’s plan for his remaining ASOIAF books in The Winds of Winter and A Dream of Spring. This presumably included that Jon Snow will murder Daenerys Targaryen after she conquers King’s Landing, before he is exiled to The Wall again. But was Aegon’s ending foreshadowed in George RR Martin’s book, A Storm of Swords?

Reddit user glassgardenweirwood quoted the third book A Song of Ice and Fire, published 20 years ago.

It reads: “Once Jon had meant to prove them wrong, to show his lord father that he could be as good and true a son as Robb.

“I made a botch of that. Robb had become a hero king; if Jon was remembered at all, it would be as a turncloak, an oathbreaker, and a murderer.

“He was glad that Lord Eddard was not alive to see his shame.” 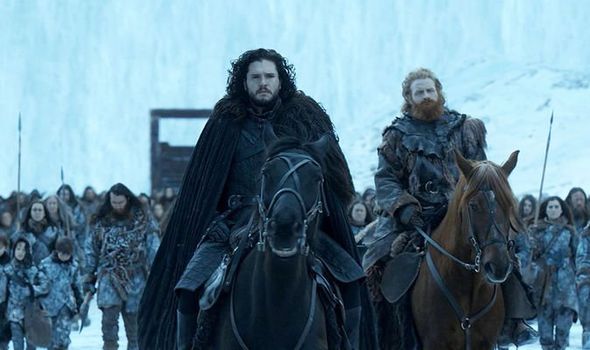 They commented: “He’s worried about some wildling/NW drama but this applies to his Daenerys situation as well, if the show got that part right.”

While a popular post below by rolldownthewindow read: “I think Jon’s ending is one thing the show probably did take from Martin.

“I think thematically it does fit in with his story.

“There’s a couple of notable examples of characters who did what they thought was the noble thing and they have to live the rest of their lives having everyone else see it as a shameful thing.”

They added: “Jaime killed the Mad King to save King’s Landing and was called a Kingslayer for it.

“Ned saved Lyanna’s baby and was called unfaithful for it.

“I think Jon is likewise going to have to sacrifice his reputation and risk being ostracised in order to do the noble thing, which is kill Daenerys.

“I think he’s doomed to go down as a kinslayer and Queenslayer, but it won’t matter to him in the end because he’ll go off with the wildlings with whom he’s accepted and seen as a hero, and won’t have to worry about the opinions of everyone else.”

Meanwhile, some fans believe A Storm of Swords holds the key to why The Winds of Winter is taking so long.

The third book in ASOIAF is widely considered Martin’s best.

After all, if anything, it acts as the conclusion to the first three books as a trilogy.

So what if The Winds of Winter is similarly climatic, following on from A Feast for Crows and A Dance with Dragons?

If this is the case, Martin will be wanting to work extra hard to get it absolutely right.

He’s certainly taking his time, which is no bad thing, with it being almost a decade now since the last book came out.

In his latest blog update, the 71-year-old author admitted he hopes The Winds of Winter will be published in 2021.

While also saying it’s going to be a very long book.

Winds of Winter release date: Could THIS be a reason for George RR Martin’s delay?

Instagram 'micro' and 'nano' influencers have become a powerful force for marketers, but data suggests only a small fraction of them are doing brand deals