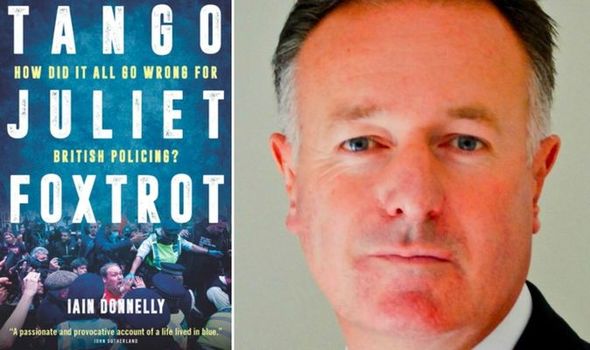 It’s hard to see one damning headline after another about an organisation to which I gave more than 30 years of my life. But when reading about the Operation Midland child abuse debacle, Extinction Rebellion policing, rampant knife crime and the Euro 2020 crowd trouble at Wembley it feels as if the police service is in a state of near constant crisis.

The forces that were once seen as the best in the world appear to have been transformed into timid organisations, wracked with self-doubt and with no clear sense of “mission”. Clear-up rates are dropping and police officers have been accused of being institutionally racist, corrupt and now misogynistic and voyeuristic. So how did we get to this sorry situation?

In my new book Tango Juliet Foxtrot I try to show what it’s really like to be a police officer, and how things changed so much during my many years of service with the West Midlands and Metropolitan police forces. Some of it will make you laugh, a lot of it might make you cry.

When I joined in 1989, the public trusted us to exercise considerable discretion in what we prioritised, meaning that we could focus on crime and anti-social behaviour. There were enough of us to guarantee that when someone dialled 999, we could get there quickly and make arrests while the suspect was nearby.

We were based in local police stations and we were out there day and night hunting down local criminals, and deterring crime. OK, it was far from perfect: there was little accountability and the approach to investigating crime was inconsistent.

What we did have, though, based stations, were out and night was a clear understanding of our job: to help decent members of the public and protect them from bad people. Today, it’s common for serious crimes to be dealt with over the phone with no attendance by police officers at all. Investigators can’t deal appropriately with online crime because they haven’t received the skills or the technology.

Officers now travel long distances to “their” patch because police stations have been closed. They need to drive even further to book in detainees at the few remaining custody facilities, a situation that acts as a deterrent to making arrests because, often, it’s just not worth the hassle.

Thousands of experienced officers have resigned, fed up with a criminal justice system that has made prosecuting even the simplest case a bureaucratic nightmare.

This is a workforce experiencing an epidemic of anxiety, depression and high levels of suicide. Officers in England and Wales are owed 500,000 rest days, all cancelled due to staffing shortages.

Too many senior officers appear indifferent – more concerned with their Twitter following than with public safety. Over half of all police stations have been sold nationally, and threequarters have been closed in London.

All the time the public perception of the police becomes more and more jaundiced.

Suspicion about police corruption is fuelled by TV programmes like Line of Duty, which bears as much resemblance to actual policing as Roger Moore’s James Bond films did to MI6. Allegations of endemic racism are exacerbated by the stop and search issue.

But let’s look at the facts. Professor Larry Sherman from Cambridge University conducted research in 2020 into British homicides, showing that rates across the UK are between 200 and 800 per cent higher in black communities.

Shockingly, in the 16 to 24 age range, young black men are 24 times more likely to be homicide victims than their white equivalents. Many of these victims will be killed by other young black men. It should therefore be obvious why they are disproportionately impacted by police use of stop and search.

Police intervene with these young men at a very late stage. Blaming officers for trying to stem the bloodbath is rather like blaming the AA when they come to fix your brokendown car: “Well, they touched it last, so it must be their fault!”

Wrong. These boys have been disadvantaged from a very young age in all sorts of ways and, for many, the journey to membership of an urban street gang becomes depressingly predictable. But it is the police response which is under the spotlight rather than the root causes.

Officers now operate in an environment where street interactions are filmed and uploaded to social media, often edited to make the officer appear as overbearing as possible. There are even dedicated social media channels like Auditing Britain where people try to goad police officers into a reaction, filming everything and screening it on YouTube.

These videos have hundreds of thousands of views, and many of the comments directed at officers are deeply insulting.

Let’s just say that when I joined the police, we wouldn’t have tolerated that.

Officers have nowhere to escape from the public because canteens are a thing of the past. What should be a relaxing mealtime with colleagues, decompressing from a traumatic incident, becomes a stressful 15 minutes in McDonald’s where youths with camera phones berate them for “eating on duty”.

Social media has made the policing of demonstrations another horrible experience for the organisation.

The Sarah Everard vigil took place over many hours, and police facilitated that vigil sympathetically all afternoon. However, when darkness fell, and a small group of noisy activists confronted them (many of them telling female officers, “I hope you all get raped and murdered”), the social media version only showed male officers dragging women, who were refusing to disperse, off the bandstand.

The “Kill the Bill”, anti-lockdown, antivaxx and Extinction Rebellion protests have produced hundreds of hours of phone footage uploaded to social media. For years, this will be the subject of civil litigation, with lawyers poring over that footage to portray the nasty police as heavy-handed. Meanwhile, officers are berated for “soft policing” of such demonstrations.

In fairness, some officers don’t do themselves any favours. Wandering around with their hands in their pockets, not wearing their hats (my pet hate!), two days beard growth and scruffy one-size-fits-no-one combat trousers.

We have also seen some annoying examples of officers forgetting the oath they took on joining, requiring them to “serve the Queen in the office of constable with fairness, integrity, diligence and impartiality”.

Thus, we have seen officers bullied and harangued into taking the knee at Black Lives Matter protests and a female officer shouting “Free Palestine” and hugging a protester at an anti-Israel demo in central London.

Is this inexperience or just good old-fashioned stupidity? And it’s not just junior officers who display this lack of impartiality. We now see senior officers stand grinning beside their new rainbow-liveried police cars dedicated to dealing with dystopian-sounding “non-crime hate incidents”.

Would it be too much to ask them to focus on proper crime? We now have the lowest ever level of judicial outcomes for crime, with a dismal seven per cent of all crime reported to the police resulting in a charge or caution.

Despite what certain so-called opinionformers might tell us, or what those in trendy North London dinner parties believe, the British police service is still composed of many of the very best people in any occupation in the UK.

However, they have been let down by politicians from both sides of the political divide, by parts of the media who focus only on the small number of things that go wrong, and by too many senior officers who put their own careers before the needs of the British public.

I fear that unless something is done very quickly, the police service will continue to lurch from crisis to crisis, eventually becoming somewhat irrelevant.

So, what’s to be done? I think we first need to answer the following question: What should the role of the British police service be in 2022 and beyond?

Is it to sit for hours on end with mentally ill people just in case they harm themselves? Currently, police officers spend between 30 and 40 per cent of their time dealing with mental health issues.

Is it to referee petty fallouts, trolling and threats made on social media? This is currently a massive demand on police time and shows no sign of reducing. Or is it to prevent and detect crime? Currently, police officers in England and Wales spend less than 20 per cent of their time doing anything related to solving crime because of the demands made on the service from other places.

Is it to gather data for the Home Office? In 2020, the policing minister Kit Malthouse set out the three priorities for policing in 2021/22. He stated that gathering more and better data was one of those priorities. The other two were to make £120million of efficiency savings (i.e. more police stations sold off) and to recruit 6,000 officers towards the 20,000 lost under Theresa May. Nothing about catching criminals or protecting the public from them.

I believe that we need a complete rethink about what the police service in Britain is there to do.What are the priorities? Crucially, what do the British public actually want from the police?

Finally, we need certain parts of the media to lay off policing and to understand that the only outcome from this frequently unfair criticism of an entire profession will be to destroy the morale of officers, most of whom are fantastic, decent people, and this will make all of us very much less safe in the future.