At least that’s what the social media promotion for my appearance at Wise Words Bookstore in Moree did. The mistake lasted only a few hours but, given my name is Richard, it was long enough for friends and family to get days of pleasure out of it: "Love your work, Robert", "G’day, Bob" and so on.

Moree is a town of about 7400 people that sits on the Newell Highway in northern New South Wales, just over 600km northwest of Sydney, just under 500km southwest from Brisbane. That makes it a bit over 300kms from where I live with my wife, Sue, on a farm west of the small town of Quirindi.

Quirindi sits at the southern tip of Kamilaroi country and Moree at the northern point, and all of it is in a drought (unparalleled in history or just a regular turn of events, depending on who you talk to). 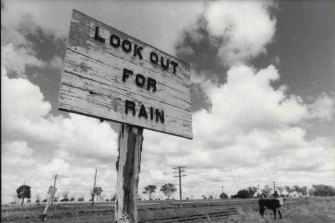 A sign with a humour adjustment near Moree in the 1980 drought.Credit:Julian Zakaras/Fairfax Media

When it rains, Moree is agriculturally abundant: cotton, wheat, canola, pecans, cattle, sheep and so on. Not so much right now. Moree Plains Local Government Area’s most recent claim to fame is making it close to the top of the amphetamine use and possession table.

So times are tough in the bush in all sorts of ways, with a toughness that extends to bookstores. In regional NSW, new-book bookshops are almost in the category of video stores but shops such as Wise Words are gamely holding the line.

Sue and I head north from home, she making Robert jokes, leaving white box tree country behind us to motor through lands of poplar box and wilga, with some cypress pine on the lighter country, and knowing the beautiful weeping myalls that like the soil to be deep and rich and black are ahead. We note the grazing country is parched, like home, and the grass is eaten short or to the point of destruction.

But there are green crops: wheat, chickpeas, triticale and bright yellow canola. And the towns of Gunnedah and Boggabri appear busy and industrious. But we know they’re like the crops –  without rain the future is bleak. Even mining is compromised by lack of water.

In regional NSW new-book bookshops are almost in the category of video stores but shops like Wise Words are gamely holding the line.

As we leave Narrabri and its blue, distant Mount Kaputar and head towards the shimmering mirages that tell us we’re in flat country, there is a message from our motel to tell us we’ve been moved to another motel. The reason? Water: a busted pipe. It’s a joke for the ages. Getting water into water pipes is the number one challenge for many northern towns. It is comforting to note our new motel boasts the tag: The Jewel of the Newell.

But Moree has good underground water, which is one of its tourist attractions: the Artesian Baths. But I don’t have time for a bath; I have book people to talk to.

I was invited to Wise Words to talk about my novel Boxed by the owner of the store, Philippa Mason, who purchased the shop from Gina Livingstone nearly a year ago. "I’ve always been a book person, and when the opportunity came up, I knew I’d always regret it if didn’t take it on," Philippa says.

Gina established Wise Words 11 years ago. There had been two bookstores in Moree at the time. They both closed. Gina bought the books from one of them and launched her own business.

"The community was very encouraging and patient," she says. So how do you keep a regional bookstore thriving? "If you’re doing what you love, people will see it and support you. You cannot compete on price but you can on service, knowledge and a passion for what you do."

We arrive early at Wise Words. It is a neat, well-organised, one-room store. And there are loads of books, not loads of knick-knacks, toys or interior decoration distractions. I make lame literary jokes about the social media promotion, but Philippa and her offsider, Gail, have done a heap of great work promoting the night, me and my book. The members of the Wise Words book club have all bought copies and their support forms the foundation of the night. 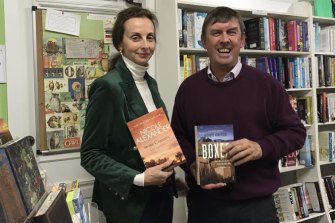 The crowd starts to arrive. It ranges from young mums to older, sparkly women, a woman in hi-vis, and even some men. There are farmers, retired farmers, a couple of teachers, an accountant, business people, local filmmaker Merri-May Gill, author Nicole Alexander, Barbara, who happens to be the grandmother of children Sue teaches, Possie, who lived near my parents when they were young (welcome to the small world of rural NSW) as well as Tracey, who comes from Narrabri for every book club. It ends up being 37 people, more than I could normally attract if I was handing out bundles of cash.

They are interesting and interested people who care about books and consider them more than just mild, time-passing entertainment. When I make a quip about members of book clubs not always reading the prescribed books, Paul says, not entirely humorously, "We read our books in this club". I stumble my way through answering their informed questions. We spend a couple of hours together, have a few drinks and I, at least, have a wonderful time.

I’m informed there are several book clubs in town, but Wise Words has the best discussions. This isn’t one of those clubs where people come just for the wine and the gossip (not that there’s anything wrong with that). Mardi and her mum, Helen, tell me the club makes them read books they normally wouldn’t and allows them to appreciate different perspectives. There is the sense that these people are supporting something they love and getting a good time out of it.

In the morning, Sue and I swan down to visit the Bank Art Museum Moree in the impressive old Commercial Banking Co building, a fair dinkum art gallery with its own collection, touring exhibitions and support for local talent. Then it’s on to see Toby Osmond at the Yaama Ganu Art Gallery and Gali Cafe. Toby informs us the gallery sells Aboriginal art internationally and will soon have an exhibition in San Francisco. Impressive stuff. The gallery is owned and operated by the Aboriginal Employment Strategy, which was started in 1997 by cotton farmer (see, they’re not all bad) Dick Estens, with the support of the Gwydir Valley Cotton Growers Association.

We zoom home impressed by the things we have seen and the resilience of the arts in dire times to our farm that is no greener or wetter than when we left it. A few days later, I take ownership of a new black and tan kelpie pup. His name? Robert.

Richard Anderson has run a beef cattle farm for 25 years and is a former miner and local councillor. His most recent novel is Retribution (Scribe).