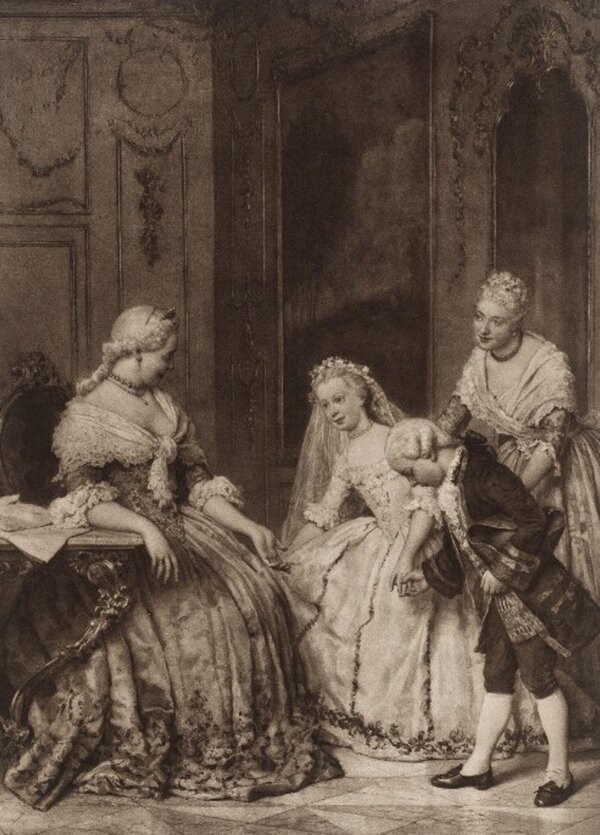 IN THE SHADOW OF THE EMPRESS
The Defiant Lives of Maria Theresa, Mother of Marie Antoinette, and Her Daughters
By Nancy Goldstone

In her new biography, “In the Shadow of the Empress,” Nancy Goldstone seeks to tell “the story of a family of immensely strong women, beginning with Marie Antoinette’s formidable mother, the empress Maria Theresa … and three of her daughters, of whom the notorious queen of France was but the youngest.” (The other two are Queen Maria Carolina of Naples and Marie Christine, Duchess of Techsen.) Goldstone, the author of books about Catherine de Medici and Mary, Queen of Scots, is drawn to female royals who defy “tradition and stereotype,” and on that count her new subjects have much to offer. Regrettably, her book does not.

The problem starts with the “selected genealogy” that opens the book, where Goldstone lists the two youngest of Marie Antoinette and Louis XVI’s four children, Louis-Charles (later Louis XVII) and Sophie, as the illegitimate offspring of Count Axel von Fersen, a Swedish officer whom the queen undoubtedly loved, but with whom, as the scholar Susan Lanser wrote in 2003, “no one yet … has been able to establish whether she had a consummated relationship.” Indeed, historians and biographers generally agree that the evidentiary record cannot answer this question conclusively.

On the one hand, speculation about the nature of the pair’s involvement was rife at Versailles, where scabrous rumor-mongering — especially about the ladies of the court — had flourished for more than a century. On the other, Marie Antoinette’s rank subjected her to the round-the-clock company and scrutiny of countless attendants, domestics and (during the French Revolution) guards. So closely monitored was her existence that of her 15-year friendship with Fersen his own diary — which Goldstone includes in her bibliography, and which Stefan Zweig describes in his influential study of Marie Antoinette as “a record of incomparable value for those who love ‘hard facts’” — identifies just one specific date on which the pair may have spent the night alone together. That hypothetical tryst occurred in February 1792, nearly seven years after Louis-Charles’s birth and five and a half years after Sophie’s. Even so, Goldstone justifies her claim about the two children’s paternity by asserting without qualification that the “Nordic dreamboat” was “the queen’s lover” and “stayed with her many nights.”

By way of a smoking gun, Goldstone remarks in her book’s closing lines that although the preserved heart of a child long believed to have been Louis-Charles was “tested for DNA against Marie Antoinette’s and found to be a match” in 2000 — Goldstone wrongly dates this event to 2004 — “in a curious omission, Louis’s remains were never publicly tested for paternity.” What Goldstone herself curiously omits to mention is that the test was for mitochondrial DNA, which carries genes from only the maternal line.

This fall, French researchers announced that they had used X-ray fluorescence spectroscopy to decrypt Marie Antoinette’s private letters to Fersen, the heavy redactions of which have thwarted would-be sleuths (including this reviewer) for generations. “In a blow to gossips,” The New York Times reported, “the contents do not clarify whether they were having an affair.” Nevertheless, Goldstone has persisted. In a video on her website, she elaborates on her thesis that Fersen slept with and impregnated the queen, clinching her case with the assertion that he must have done so because “experts” have determined that Louis XVI was autistic. By “experts,” Goldstone apparently means one Dr. Linda Gray, a “noted developmental pediatrician” in New Haven, Conn., whom, she writes in her book, she “contacted … about Louis’s behavior without identifying him.” “The child you describe,” Goldstone quotes Gray as responding, “checks every box for autism spectrum disorder.” If correct, this hypothesis would perhaps explain much about the character of the shy and self-conscious French king. It would not, however, prove that he was unable or unwilling to procreate with his wife. In any case, Gray’s words cannot fairly be termed a diagnosis, given that Louis died in 1793; yet to Goldstone, they qualify as compelling historical evidence.

Such misleading statements are particularly troubling because they repeat the pattern of prurient “fake news” that destroyed Marie Antoinette in the first place. Like Maria Theresa (who had to fight a nearly eight-year war to uphold her right to succeed her sonless father as the ruler of the Hapsburg Empire) and Maria Carolina (whom Napoleon Bonaparte is said to have grudgingly praised as “the only man in the Kingdom of Naples,” only to oust her from her throne and send her into exile), Marie Antoinette lived in a misogynistic political culture that dealt harshly with powerful women. From the moment she arrived at Versailles from her native Austria in 1770, Louis’s 14-year-old bride met with implacable hostility from many high-placed figures at court. Some of her antagonists opposed the Austrian diplomatic alliance that her marriage to Louis was meant to ratify; others, such as her husband’s brother Provence (later Louis XVIII) and his cousin Chartres (later Philippe-Égalité), hoped that if their kinsman’s marriage failed, they might become king themselves. To advance their agendas, these adversaries cast her as a blight on the honor of her husband and of France: an amoral, debauched and lascivious whore. They circulated pamphlets depicting her in orgiastic romps with her closest female friends, her stylist and her husband’s younger brother, d’Artois (later Charles X), among others. As it happens, these publications often called her children bastards, but typically named d’Artois, not Fersen, as the father.

Once the revolution broke out in 1789, opponents of the crown adopted the same strategy, churning out still more pornographic leaflets portraying “l’Autrichienne” — literally “the Austrian woman,” but also a play on the word for a female dog — in still more X-rated scenarios. This smear campaign reached its apogee, or its nadir, at the trial that condemned her to death in October 1793, when the prosecutor for the new republican government accused Marie Antoinette of committing incest with 8-year-old Louis-Charles. To explain these “unusual charges,” Goldstone notes that the prosecution had evidently decided that the queen “had to stand in on a visceral level for the corruption and depravity of the monarchy in general. … This was done by building on the image presented” of her in the pamphlets. This is correct. If only Goldstone had brought the same acumen to her own debatable suppositions about Marie Antoinette’s sex life.

Marlon Brando: the charmed but wasted life of a hedonist

You Say Plagiarism. I Say Provocation.