With her debut essay collection, “My Body,” the model and influencer takes stock of what she’s gained and lost from selling her image for a living. 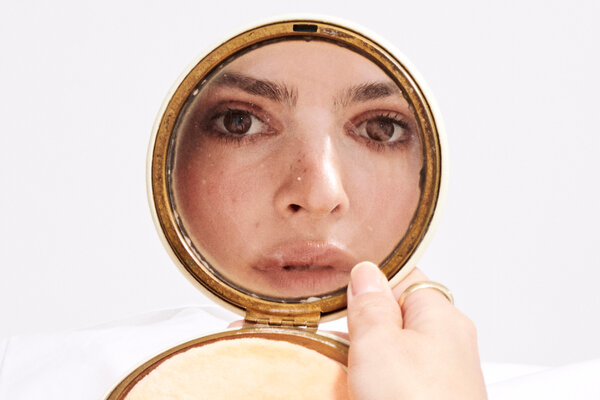 On a September morning in SoHo, the airy, light-filled Inamorata office was filled with women. Beside racks of bathing suits and “city sets” (matching crew necks and bike shorts bearing versions of the logo also found on the hand towels in the bathroom), they sat around communal tables, cooing over a baby.

Sylvester is the 8-month-old son of the apparel company’s founder and chief executive, Emily Ratajkowski. He and her giant Husky mix, Columbo, were the only boys around.

“As you see, you’re in my safe space,” Ratajkowski said, sitting on a pink velvet couch facing the room where her team was tending to her child. “Having your own company, you’re the one who decides what the images are of your body that are going out in the world.”

Control is big for the supermodel. Ever since 2013, when she became famous for dancing seminude in Robin Thicke’s “Blurred Lines” music video, images of Ratajkowski have diffused across the internet. From David Fincher’s “Gone Girl” to paparazzi photos to fashion ads to her own social media posts, her face is so ubiquitous she said she even gets tagged in tattoos.

In 2018, when she was at the height of a modeling career she’d thought would be temporary (she dropped out of U.C.L.A. in 2010 and needed the money), her mother, Kathleen Balgley, a former English professor, was diagnosed with amyloidosis, a chronic, abnormal protein buildup in her hands.

Around then, Ratajkowski said, “I felt like something was really missing.” Alone in Los Angeles while her husband, the movie producer Sebastian Bear-McClard, was working in New York, Ratajkowski began to write.

The resulting essays, collected in “My Body,” out from Metropolitan Books on Nov. 9, reveal a person whose politics and sense of self are very much in progress. “They were written to try to figure out what I believed,” she said.

In the essay “Blurred Lines,” Ratajkowski returns to the set of a video that was criticized as degrading and even “rape-y,” and considers misogyny and her role in it. Back then she was 21 and found the experience “empowering,” she writes, a chance to embrace her sexuality on camera and use it to her advantage.

Now that she’s 30, she sees how naïve she was. “Whether you’re wearing a burqa or a bikini,” she said, “we’re operating in the very specific confines of a cis-hetero, patriarchal, capitalistic world.” (She added: “I always freak people out when I use words like that, just as far as it’s, like, a little obnoxious.”)

He Can’t Carry a Tune, but Chang-rae Lee Has a Song to Sing