Rags to rhinestones! Born in poverty, Dolly Parton has been a star for 50 years and has sold 100 million records. Today, she’s a feminist icon who says she’s certainly not dumb — and not blonde either!

SHE COME BY IT NATURAL

For almost all her career, Dolly Parton’s most famous asset hasn’t been her prodigious musical talent, but her astounding cleavage. ‘She’s the Queen of Country,’ a smirking Terry Wogan told viewers of his chat show in 1983, ‘and the best chest in the West.’

Dolly, all bouffant wigs and tight, rhinestone-encrusted clothes, has joined in the mockery herself, commenting cheerily that ‘it takes a lot of money to look this cheap’. But then why should she care what people think?

Having sold 100 million records, and with a fortune estimated at $500 million, it’s Dolly who has had the last laugh. ‘I’m not offended by the dumb blonde jokes because I know I’m not dumb … and I also know I’m not blonde,’ she says. 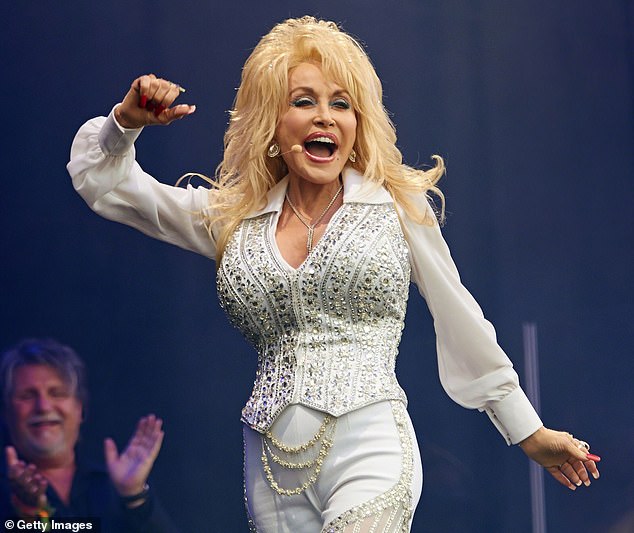 Sarah Smarsh who is a former research fellow at Harvard University, has penned a biography about Dolly Parton (pictured)

Dolly Parton’s rise, from her childhood in a cabin on the banks of Little Pigeon River in Tennessee to her position as one of the music industry’s biggest and most enduring stars, is a terrific rags-to-riches tale. And for Sarah Smarsh, a former research fellow at Harvard University and a Parton superfan, it also makes her a feminist icon.

In She Come By It Natural, which is part-memoir and part-celebrity biography, Smarsh sets out to show how Dolly’s songs, and the way she has lived her life, have influenced a generation of American women.

The book is written in an odd mixture of breathless enthusiasm and earnest academic jargon. When Dolly left home at 17 to go to Nashville, Smarsh declares, she wasn’t just seeking fame and fortune, like so many other young women drawn to showbusiness: she had ‘independent dreams that defied gender norms’.

Despite her good looks and obvious talent, Dolly had a miserable time when she first moved to America’s country music capital. She was so hard up she resorted to roaming hotel corridors, looking for room service trays from which she could steal food.

At 18, she married Carl Dean, to whom she remains married to this day. Dean, who ran an asphalt-laying company, is a rather mysterious figure who has rarely even been photographed.

Has the marriage been happy? ‘The extent to which Parton’s sexual experience was or wasn’t contained by monogamous marriage is for her to know,’ Smarsh says somewhat pointlessly. Dolly’s big break came when she landed a spot on a TV show hosted by Porter Wagoner, a middle-aged country singer with ‘a thunderous ego’, who hired Dolly to be the pretty young thing at his side.

Before long, she was more popular than him and her records far outsold his. One of her early hits was Jolene, with its irresistible refrain, ‘I’m begging of you, please don’t take my man’, a song inspired by a bank cashier who flirted with Dolly’s husband. 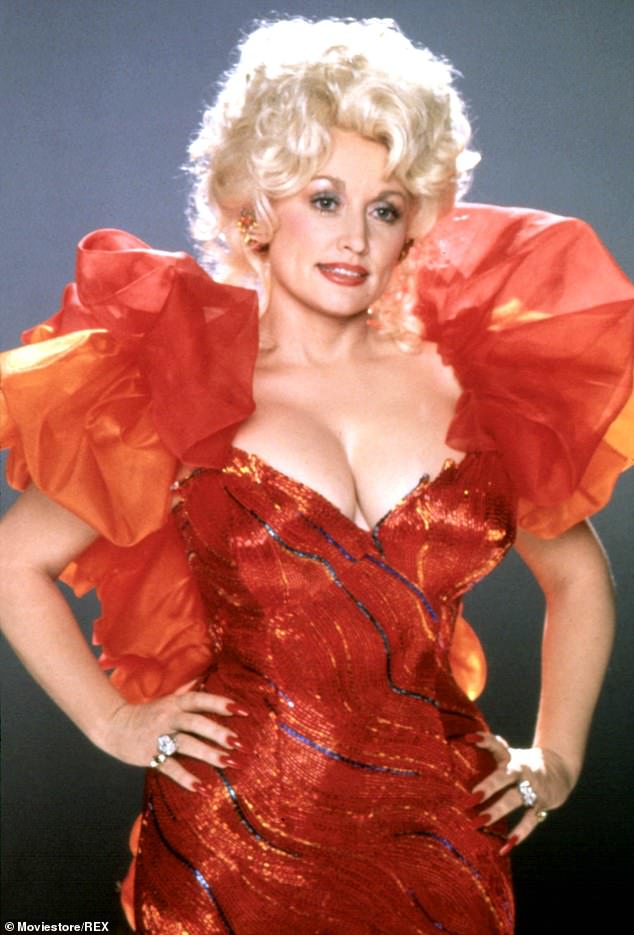 Dolly (pictured) opened her own theme park in Tennessee in 1986, attracting three million visitors a year and providing employment in the area

After seven years, Dolly broke free of Wagoner, who promptly sued her for a cut of all her future earnings. Dolly settled with him for a million dollars. It was a wise decision; the song she wrote to mark their professional split, I Will Always Love You, sold 20 million copies when Whitney Houston recorded it in 1992. Even more astutely, Dolly said no to Elvis, who wanted to record the song but only if he owned 50 per cent of the rights. Dolly cried all night after turning him down.

Time and again, Dolly has shown that beneath her giggly girly exterior she has a core of steel — or, as Smarsh would have it, she is ‘a smart business shark with a hypersexualised physical presentation’. Dolly herself puts it rather more pithily: ‘I look like a woman, but I think like a man and you better pay attention or I’ll have your money and I’ll be gone.’

Dolly moved seamlessly into films and had a huge hit with 9 To 5, a dark comedy about three women plotting to murder their lecherous boss. The jaunty song of the same name that she wrote for the film has become an anthem for working women everywhere. Other successful parts followed, in Steel Magnolias and The Best Little Whorehouse In Texas.

In 1986, she opened Dollywood, her own theme park in Tennessee, which attracts three million visitors a year and provides employment in an area which is still very deprived. She later founded her own label so she could record whatever she wanted — not just country music but also bluegrass, gospel and pop. 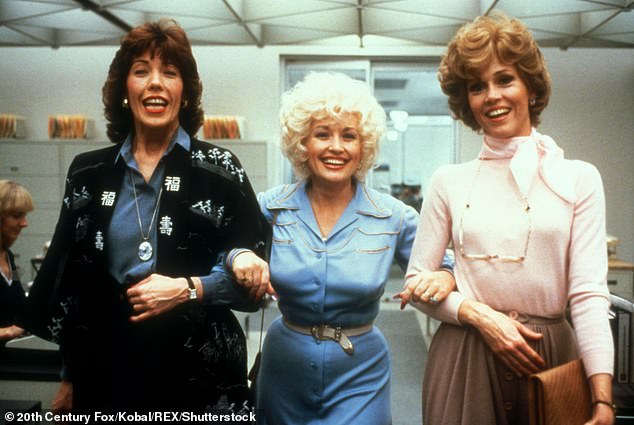 Sarah Smarsh who hasn’t met Dolly, was able to write the biography from interviews and Dolly’s own autobiography. Pictured: Lily Tomlin, Dolly Parton, Jane Fonda in Nine To Five

At what point did Dolly change in the public perception from a slightly tacky country singer to a superstar who is the epitome of cool? Appearing before 180,000 ecstatic fans at Glastonbury in 2014 certainly helped her street cred, as did the graceful way she dealt with the festival’s notoriously muddy conditions. ‘I grew up on a farm,’ she shrugged, ‘so this mud ain’t nothin’ new to me.’

Now 75, Dolly is also a serious philanthropist. For the past 25 years, she has been quietly funding Imagination Library, a literacy programme set up in honour of her illiterate father, which sends a book a month to children, including 40,000 of them each month in Britain. Last spring, she also donated a million dollars to assist in the development of the Moderna Covid vaccine.

Smarsh, who grew up in the same grinding rural poverty as Dolly, has never met her subject, let alone interviewed her, so as a biography this is pretty sketchy stuff, culled from interviews and from Dolly’s own autobiography. 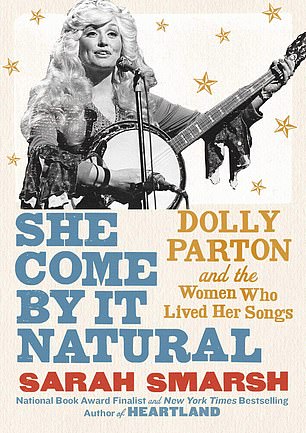 The author does come into her own when she is writing about the impact of country music, which she describes as ‘how we talked to each other in a place where feelings weren’t discussed’.

She sees something heroic and even subversive in Dolly’s trademark flamboyant look: ‘She stands for the poor woman, the working-class woman whose feminine sexuality is often an essential device for survival.’

Smarsh is less convincing when she is trying to pigeonhole her as a feminist icon, even though Dolly has always maintained that she isn’t a feminist. ‘I just think we should all be treated with respect,’ she says — a comment which, Smarsh says gloomily, ‘might break your heart if, like me, you speak the language of college-educated activists’.

The truth is that Dolly Parton defies analysis. She has been a star for more than 50 years, without a hint of scandal and without ever being photographed looking less than immaculate. She is her own special, joyful invention, whether singing about her mother’s love for her in Coat Of Many Colours or writing the ultimate break-up song, The Grass Is Blue.

My favourite Dolly story is about the drummer in her backing band who told her that her stage costume was too flashy. Dolly fired him and bought a drum machine instead. The machine saved her a lot of money, she said sweetly, and ‘it don’t talk back’.

In This Debut Novel, a Chinese Immigrant Keeps His Sleepwalking Sister’s Secrets

How I Got Past the Misogyny of ‘War and Peace’