Dolly Parton, Bill Clinton and Me (by the man who outsells them both) James Patterson’s novels have earned him $700m. Now he’s written a memoir as gripping as his thrillers revealing his A-list friends

THE STORIES OF MY LIFE

Anyone who has ever started a James Patterson thriller knows how damned difficult it is to put down. And the same is true of this vivid, invigorating memoir.

Patterson is a gazillion-selling literary leviathan, sweeping away more or less all in his path; one of the world’s best-selling and most lucrative authors whose sales top around 400million, earning him a fortune of about $700million on the way.

He’s certainly the world’s most prolific writer, with more than 400 titles to his name: thrillers, non-fiction on subjects ranging from Jeffrey Epstein to the Kennedys to ER nurses, plus true crime books, children’s and young-adult stories. 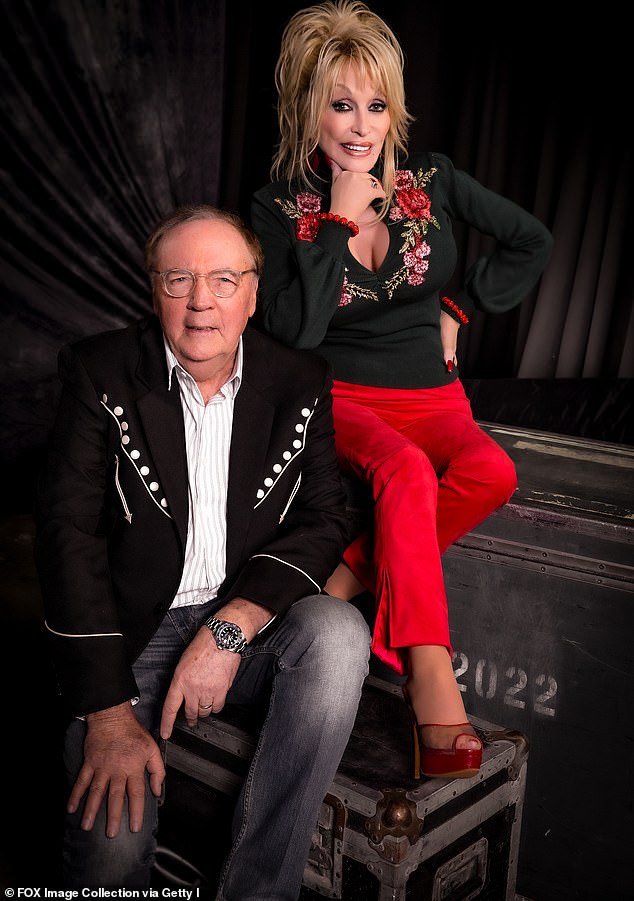 Star-studded: James Patterson and Dolly Parton. James’ bracing autobiography includes stories about A-List friends such as the country star herself

This bracing, immensely upbeat autobiography seems to be the tenth book he has published this year alone. He’s passionate about literacy, and with his wife, Sue, does an enormous amount to promote reading, helping kids and schools and developing bookstores. And he’s 75. Doesn’t he ever take a break?

Well, no. He knows everybody and is engagingly happy to let us know, too. Dropped names tumble through the pages like apples thudding down from a tree.

It’s paradise for a gossip columnist: here’s Jim Morrison of The Doors hanging upside down to test the lighting rig at a music venue where the young Patterson is working; here’s Dolly Parton, a potential collaborator and, reassuringly, ‘genuine, thoughtful, smart as a whip, funny and self-deprecating’. She calls him ‘Jimmy James’ and sings Happy Birthday down the phone.

Tom Cruise (‘not that short and a total pleasure to talk to’) calls him up in LA for a meeting and gives him his personal number. Idris Elba (‘very funny’) wants to talk about taking the part of Alex Cross, Patterson’s troubled detective hero, originally played by Morgan Freeman in the film Along Came A Spider, which was Patterson’s first big novel to go nuclear. Likewise Jamie Foxx, who calls some youthful Paramount executive a ‘squirrelly little f***er’. 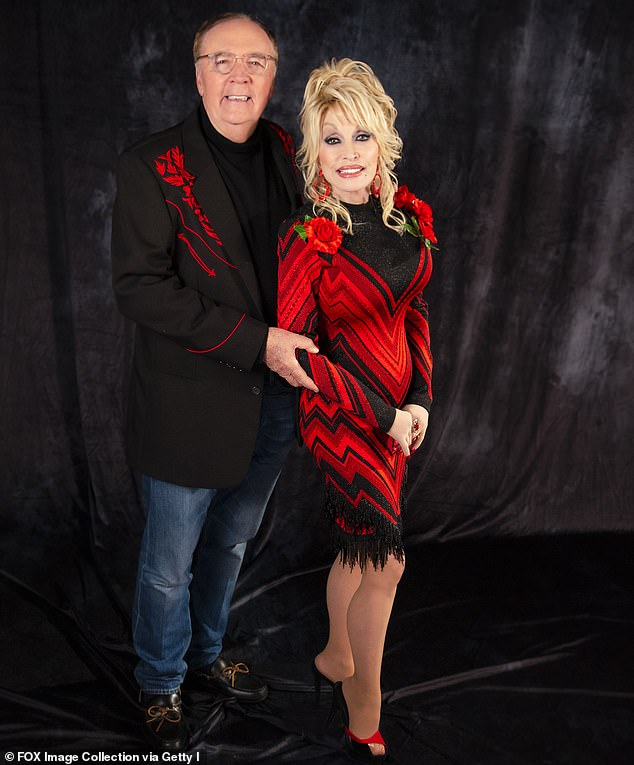 James recalls how Dolly calls him ‘Jimmy Jim’ and sings Happy Birthday to him down the phone. He met at a music venue where he used to work

Meanwhile, Serena Williams wants his autograph after a flight from Florida.

On the pavements of New York he and Woody Allen wave tentatively as they pass each other; Tennessee Williams is at the next door table in a Manhattan restaurant; and while he’s having a drink in a piano bar, who should wander in but Joe Cocker, for an impromptu two-hour jam session.

He chews the fat with Kurt Vonnegut on the steps of the Slaughterhouse-Five author’s home. At an agent’s house he watches as Norman Mailer and James Baldwin — ‘two little guys who looked about as athletic as French poodles’ — are trying to fight each other in a row over what’s good literature and what isn’t.

There’s never a dull moment. He loves his golf and has scored nine holes in one. Which seems a lot. He plays the game with Presidents Bush and Clinton, though Trump is the most natural golfer, he says, with a genuine low handicap.

He’s a pal of the Clintons after collaborating with Bill on two massive best-selling doorstop thrillers, The President’s Daughter and The President Is Missing. (Spot the theme there.) Not surprisingly, Hillary helps out with a very supportive quote on the memoir’s cover. 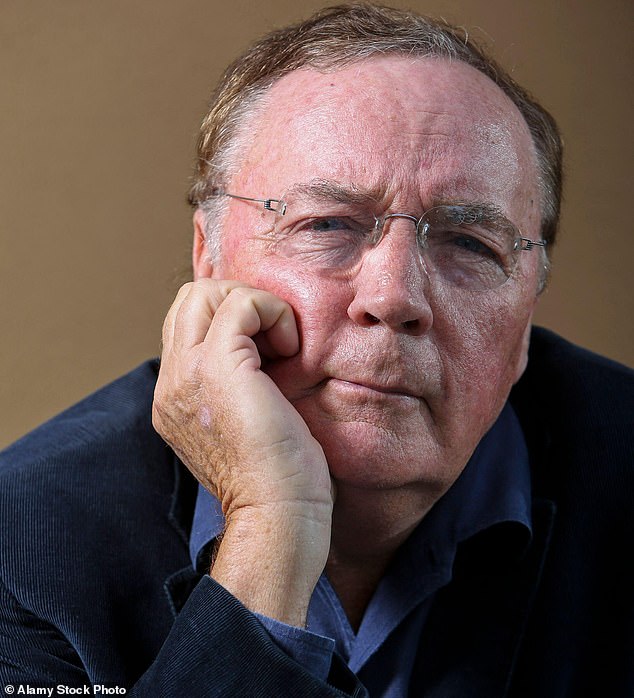 James (pictured) is a pal of the Clintons after collaborating with Bill on two massive best-selling doorstop thrillers, The President’s Daughter and The President Is Missing

He was clearly a brilliant ad man and go-to copywriter: he ran the Burger King account, Miller beer and Philip Morris. This was the Mad Men era of expense accounts, martinis, long days and very late nights, when senior women executives still had to wear hats in the office.

Patterson doesn’t mince his words: when the British marketing conglomerate WPP swooped in on an attempted takeover headed by Martin Sorrell, it’s fair to say they didn’t hit it off. ‘I always thought of Sir Martin as a… rather unpleasant, fire-breathing bean-counter.’

Patterson was inexhaustibly hard-working, but had his eye on a different world outside the offices of ad-land. He was going to be a writer: ‘I would get up at five every morning to squeeze in a couple of hours before working in the ad factory. I’d write early in the morning, every morning. I’d lock my office door at lunchtime and write for half an hour. I’d write on the plane during every business trip. I’d write pages at four in the morning and I’d write again until midnight.

‘I refused to give up on myself.’ So that’s how you do it: you have to work bloody hard.’

You have collaborators, too. No wonder he’s published so many titles. Look at any shelf of Patterson books in your local shop and you will notice one thing: most of them are co-authored. And as Patterson knows, people can get awfully snooty about that. 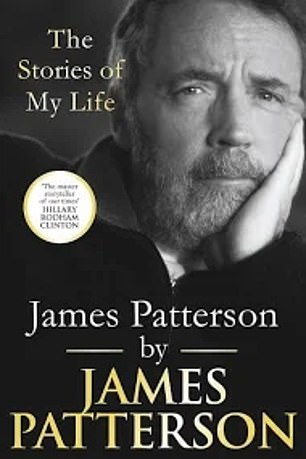 He deals with that criticism fairly briskly. Look, he writes, ‘Simon & Garfunkel, Lennon & McCartney, Gilbert & Sullivan, Woodward & Bernstein, Rodgers & Hammerstein…’ and so on. Collaborations are common and they often work beautifully, he says. Too true.

This is not a conventional autobiography. It is told in quickfire, punchy little chapters, two or three pages at the most, that make it virtually impossible not to read on. The language is colloquial, friendly.

It is richly entertaining. And it is full of stories, just like his novels. ‘One thing I’ve learned and taken to heart about writing books or even delivering a good speech is to tell stories. Story after story after story.’

Patterson rattles through his early life, a happy childhood in upstate New York where he was educated at Catholic schools, learned to play the piano with an elderly nun, loved sports and developed a passion for Elvis Presley, much to his mother’s disapproval, who wasn’t so keen, and made him confess to a priest that he owned Elvis trading cards. The priest replied: ‘Who doesn’t like Elvis Presley?’ Quite.

Of course, this being Patterson, he had some A-list patients, including James Taylor (‘stunningly handsome’), who sang in the hospital coffee shop, and the great American poet Robert Lowell (‘troubled but bright and interesting’), who would give private readings to a few patients and staff. Hell, observes Patterson not unreasonably: ‘I was getting paid to listen to James Taylor and Robert Lowell.’

It’s quite a life, Patterson’s, and this fizzing, funny, often deeply moving memoir is a perfect way to understand the dizzying world of a best-selling writer.

How does he do it? Well, he says, with a large folder full of unused story ideas and the fact that everything he writes is outlined in detail.

Is it that easy? I doubt it, but I loved this book.

I baked myself better!