THE MIDNIGHT BARGAIN, by C. L. Polk (Erewhon, $25.95), is set in a Regency-flavored fantasy world where magic, manners and marriages structure society with the rigidity of whalebone stays. Beatrice Clayborn’s family is deep in debt after a disastrous trade in orchids. Their only hope lies in a good match for Beatrice during bargaining season, when eligible young women are courted by well-heeled bachelors. 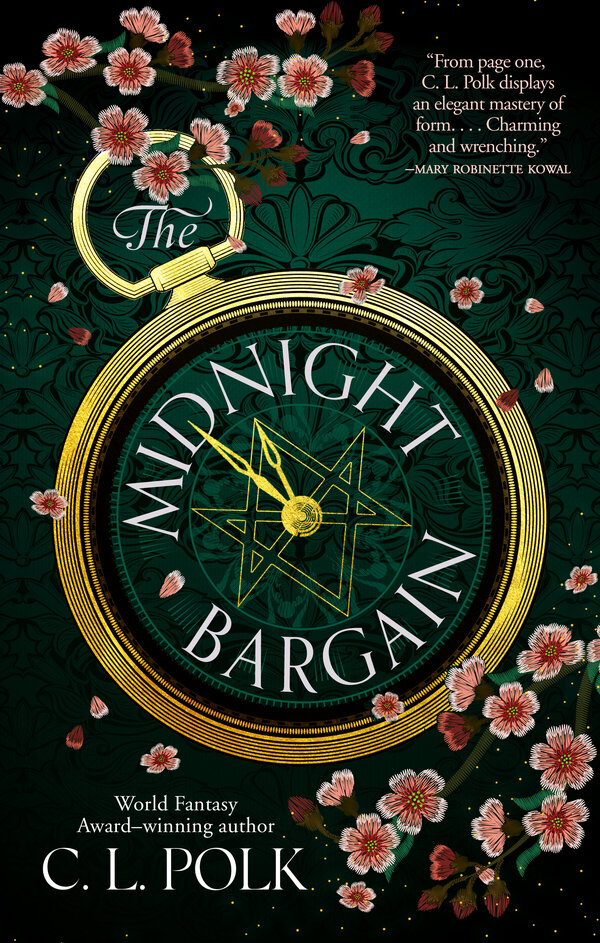 Here in Chasland, magic is the province of men; women may perform simple charms in their youth, but once married they are forced into warding collars that suppress their abilities, ostensibly to protect potential children. But Beatrice has been studying magic in secret.

She wants nothing more than to find a spell for making the “great bargain,” a partnership with a spirit instead of a husband. But when she meets Ysbeta Lavan and her brother, Ianthe — heirs to a shipping fortune — Beatrice’s straightforward goals become complicated.

I love novels of magical manners, stories that contrast the rigid specificities of humdrum moneyed lives with the numinous wilderland of magic. Polk’s contribution to the genre is smooth and confident, with prose that reads like running a hand over velvet. She uses historical fantasy not to simply dismiss outdated mores on sexuality and desire but to engage with the contemporary issues of birth control and parental leave, which remain frustratingly controversial in much of the world. A sleek, beautiful book with a quietly serious heart.

V. E. Schwab’s THE INVISIBLE LIFE OF ADDIE LARUE (Tor, $26.99) also centers on a woman bargaining to evade marriage — with much more painful results. In 18th-century France, a village girl named Adeline makes a deal with a spirit: Addie wants a life of freedom; the spirit wants her soul. They agree that she can live until she’s tired of living — but once the deal is struck, Addie discovers that she has gained immortality at the expense of agency. No one she knows recognizes her, and she can leave no impression on the world. She is a kind of unaging ghost who can feel pain but never die, who remembers everything without being remembered herself.

Over decades, she and the spirit engage in a terse, fierce dance as Addie struggles to find ways and reasons to live — until, 300 years later, she meets someone capable of remembering her.

This is a novel unshakably fixed on the idea that art makes life worth living. As Addie learns to live with her curse, she begins to push against its limits, discovering ways to leave echoes of herself in music and paintings. Schwab’s writing is warm and intense, and the passages set in the past often make you feel as if you’re reading by candlelight: “Addie lifts a glass of wine from a low table, and moves from room to room like a shadow … and feels herself among the folds of history.”

The book is an elegant comment on the erasure of women from recorded history, but not a pointed one; you never feel that Addie LaRue is a metaphor. She is a woman fighting literally to be seen while bearing witness to her own life, and I rooted for her throughout.

I have been longing to read Susanna Clarke again for 16 years, ever since I turned the last page in “Jonathan Strange & Mr. Norrell.” I was not prepared for PIRANESI (Bloomsbury, $27), a book that addresses pandemic confinement — the difficulty of dividing time, of maintaining a stable sense of self — through a filter of marble and gold, of rushing ocean, of tenderness and love.

Piranesi lives in a house of many halls, filled with magnificent statues and flooded by curious but calculable tides. The house is Piranesi’s whole world, and he claims to have always lived in it; he keeps meticulous journals with such entry headings as “the Seventeenth Day of the Fifth Month in the Year the Albatross Came to the South-Western Halls.” He is, by his own count, one of 15 people who have ever inhabited the house. Only he and one other are still alive.

I found myself pulled along as much by Piranesi’s voice — sweet, earnest, passionate — as by a desire to puzzle out what genre I was in. Was this a play on C. S. Lewis’s city of Charn, or a postapocalyptic novel set in the remains of the London Underground? Was Piranesi in a generation ship? Was he really in a fantasy land, and if so, what was its relationship to our own world of trees (which he is not certain exist) and of suits in Prince of Wales check (which he is able to distinguish)? The mystery unspools through Piranesi’s labyrinth and journals, and its resolution flooded me, as the tides flood the halls, with a scouring grief, leaving gleaming gifts in its wake.

The pandemic has brought many able-bodied people for the first time into territory intimately familiar to the chronically ill, the former speaking with wonder and pain of what, to the latter, is commonplace. That Clarke herself has wrestled for years with an elusive illness further illuminates the secluded world of “Piranesi,” which so thoroughly captures the isolation of this moment. But I don’t want to risk reducing the plenitude of this novel to allegory: It is rich, wondrous, full of aching joy and sweet sorrow.

Game of Thrones end: ‘BRAN not Daenerys is the main villain’ Does THIS prove it?