THE SUBSTITUTION ORDER
By Martin Clark

Have you heard the one about “a legal thriller” being an oxymoron? Like most lawyer jokes, it works because it’s (sort of) true. Lawyers aren’t known for their daredevilry. However, in a good legal thriller, the law itself propels the narrative as intensely as any single character. By that definition, Martin Clark’s “The Substitution Order” is not merely a good legal thriller; it’s a great one.

Kevin Moore was once a beloved attorney in the Virginia bar, but now he’s broke, on probation, disbarred and managing SUBstitution, a knockoff sandwich shop using meat that’s nearing its expiration date faster than Kevin.

Maintaining his sobriety while still recovering from the shell shock of his addiction-fueled downfall, Kevin is approached by a nefarious stranger who demands his participation in a multimillion-dollar insurance scam. All he has to do is admit a nonexistent act of malpractice so a former client can collect a cool $5 million from his professional-responsibility policy. The only problem is that Kevin’s a stand-up fella and refuses to play along. 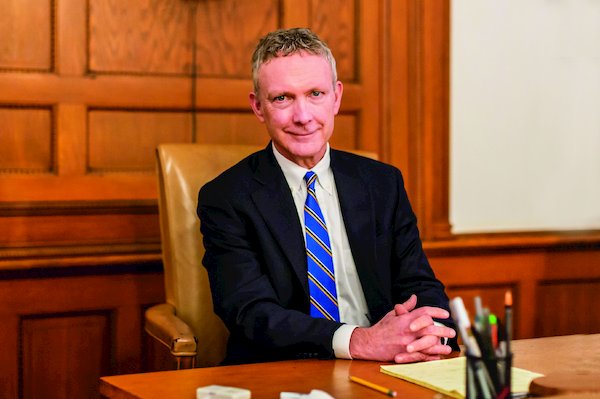 What follows for Kevin is one disaster after another, as the nebulous bad guys (their identities never seem to matter) set him up for a failed drug test and plant contraband and a gun on him to boot. He’s arrested — thrice — and is facing multiple felony charges in addition to his original drug case, a lawsuit and impending divorce. Even worse, thanks to his original sin of falling into the criminal justice system, no one believes the once irreproachable attorney.

Kevin knows better than anyone that the law, “fueled by biases and assumptions,” rolls on “bent, slanted tracks.” As he says, “Once you make a single mistake, everything else you do is viewed through a warped lens, and any new narrative begins with the assumption that you’re simply up to more of the same.”

Through the system’s tunnel vision, even Kevin’s best deeds, like a contribution to a worthy kid’s college fund, are twisted to look inculpatory. Kevin compares the justice system to a “’70s-model Snapper Comet mower,” a “creaky contraption” with “three basic blade settings,” unable to respond to the labyrinthine hustle being unleashed against him.

The law is not the only broken system in “The Substitution Order,” and Kevin is not the only victim of injustice. Insurance companies pay off bogus con-man claims while searching for ways to deny health care to the infirm. Corporate distortions of the economy force humble people to sell family land they can no longer afford to carry. Government officials hand over taxpayers’ dollars to swindlers while smiling for the cameras. A hardworking teenager struggling with college tuition has his carefully hatched plans derailed by the incompetence of school administrators. At each turn, Clark writes with compassion not only about those exploited by callous institutions, but even about the paper pushers who do the bidding. “It’s just a severely screwed-up system,” one worn-out bureaucrat observes as he’s about to quit his job. “Nothing personal.”

For readers who don’t get chills from Cobra claims, competing case precedents and the distinction between void and voidable court orders, Clark’s attention to legal detail may prove a tad too careful. But lurking among the technicalities are the tools that savvy Kevin might use to save himself — and the clues that Clark cleverly weaves together for a truly thrilling ending. Maybe some lawyers are unpredictable after all.

Alafair Burke’s most recent novel is “The Better Sister.”