CRISIS IN THE RED ZONE
The Story of the Deadliest Ebola Outbreak in History, and of the Outbreaks to Come
By Richard Preston

Richard Preston has a penchant for the cinematic, even when his subject matter could not be more depressing and dire. His best-selling 1994 book, “The Hot Zone,” about an Ebola outbreak at a medical research facility in Reston, Va., was recently turned into a mini-series despite its reliance on hyperbole (as the science writer David Quammen rightly noted). His new book, “Crisis in the Red Zone,” falls into a similar trap. Covering the 2014 Ebola outbreak in Western Africa, it also seems written with a singular intent: inspiring the movie version.

However one feels generally about the dramatic tone that Preston favors, it feels especially inappropriate in this book. The Reston strain of Ebola that was the focus of “The Hot Zone” was not harmful to humans — only other primates died. In contrast, more than 11,000 people died during the Ebola outbreak that is the focus of “Crisis in the Red Zone,” most of them in Guinea, Sierra Leone and Liberia. In Preston’s hands their lives and suffering often feel like little more than added color, heightened by his choice to end many of the book’s chapters with cliffhangers. One section ends with the well-worn image of a researcher looking ominously into a microscope.

Much like the clichés that are a regular feature of Hollywood films, the stereotypes that pile up in this book quickly become painful. A Frenchman is portrayed as being especially sad when a medical team is forced to leave behind a load of Camembert to make room for medical equipment. But it’s Preston’s portrayal of the nonwhite characters that feels especially egregious. 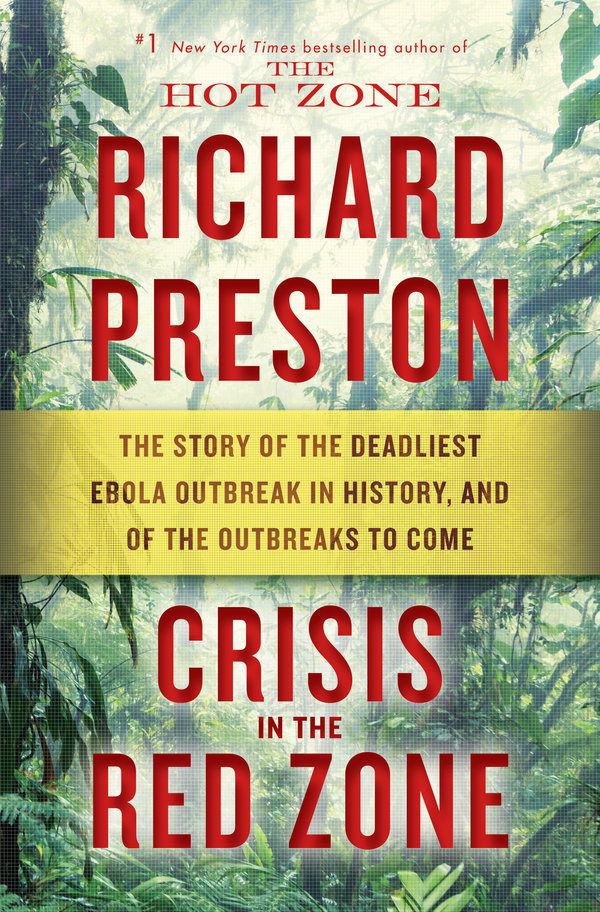 His descriptions of Sierra Leone, Liberia and the Democratic Republic of Congo, and the people who live there, are so problematic in parts that I took to texting a friend snapshots of the most offending passages and asking her if a virus can be neocolonial. Despite their occasional use in germ warfare, viruses are neutral actors — but there’s nothing neutral about the portrayal of diseases and how we respond to them.

Preston does try to wrestle with the unequal medical treatment received by Africans who contracted the disease versus treatment received by foreign white aid workers who became infected. He details the excruciating decision-making process that denied Humarr Khan, the chief Sierra Leonean doctor attempting to curb the country’s Ebola outbreak, access to ZMapp, an experimental Ebola drug, when he became infected while treating patients. An American doctor and an American missionary were later given access to the drug, and they survived. Dr. Khan did not.

But this examination comes too late, during the book’s final quarter, after Preston has spent chapters mired in caricature and overdramatization. What’s more, the book also falters on a deeper, structural level: Preston raises two key reasons for the likely risk of infectious diseases in the near future, but he doesn’t go on to explore these threats fully enough or in a way that might have added some needed subtlety and context to his larger narrative about the Ebola outbreak.

The first is the dominant theory that Ebola emerged, in part, because humans are increasingly encroaching on previously wild areas, allowing diseases to jump to our species. But the forces driving that pattern of encroachment are not discussed. And that pattern, it should be noted, is happening not just in Africa but in large parts of Asia and in the United States, where according to the Centers for Disease Control, it’s leading to an increase in tick-borne diseases. In other words, this isn’t just an African problem, even if the book leaves you with that strong impression.

Similarly, Preston notes that at least part of the problem in treating Ebola lies with local mistrust of foreign doctors and the way they present themselves to communities. Doctors Without Borders, he writes, show up in white “space suits” whisking away sick patients who, because they rarely overcome Ebola’s high mortality rate, are never seen again, even in death — the nongovernmental organization disposes of the bodies. According to Preston, it was Doctors Without Borders who denied Khan access to ZMapp. One of the organization’s rationales for its decision was that if Khan died from the treatment, or if he was miraculously healed, either outcome would lead to further rumors among the local population, affecting the NGO’s ability to do its job.

Because of their distance and their power over life and death, foreign doctors are sometimes seen as the source of Ebola infection, not as the source of treatment. One community, chronicled in the book, hid sick family members and physically attacked doctors. This narrative, that outsiders brought the disease, has been stoked by some politicians amid the current Ebola outbreak in the Democratic Republic of Congo, where Ebola doctors and medical centers are being attacked. But Preston doesn’t tie this mistrust into a longer history of colonialist violence or the broader story of the 2014 Ebola outbreak itself. Given the book’s warning that this is a portent of global disease outbreaks to come, it would be good to know what this mistrust might mean for future pandemics. Instead Preston folds these bigger questions into passages that have the effect of simply making Africans seem ignorant of basic science.

These distracting gaps are unfortunate, since “Crisis in the Red Zone” also recounts an important story about the risks of emerging diseases and a global medical system ill equipped to handle them. But it’s lost between fevered descriptions designed, seemingly, to provoke the kind of hysteria about Ebola that might work well for the film thriller Preston seems to have in mind.

Kendra Pierre-Louis is a science reporter for The Times.

CRISIS IN THE RED ZONE
The Story of the Deadliest Ebola Outbreak in History, and of the Outbreaks to Come
By Richard Preston
375 pp. Random House. $28.