Gin & genius: Booze made Dylan Thomas bark like a dog, left Kingsley Amis barely able to walk — and should have killed Graham Greene. And don’t mention the novelist who made up for his tiny appendage by drinking himself senseless…

IN LOVE WITH HELL

The size of my monthly Majestic Wine bill suggests author William Palmer is not wrong when he says that writers — ‘psychologically slippery’ at the best of times — are particularly prone to the joys and pitfalls of grain and grape.

Booze, ‘at least at the outset, is hugely enjoyable’, Palmer says correctly. It is ‘an excellent buffer against social boredom,’ and any other sort of boredom.

Drawing on the descriptions by Anthony Burgess and Kingsley Amis, In Love With Hell evokes the idyll currently denied us — the traditional street-corner pub: the frosted panes of glass and etched mirrors in the Saloon Bar, the ‘constant hubbub of conversation’ and the landlord calling out the greatest six words in the English language, ‘Yes Sir, what will you have?’ 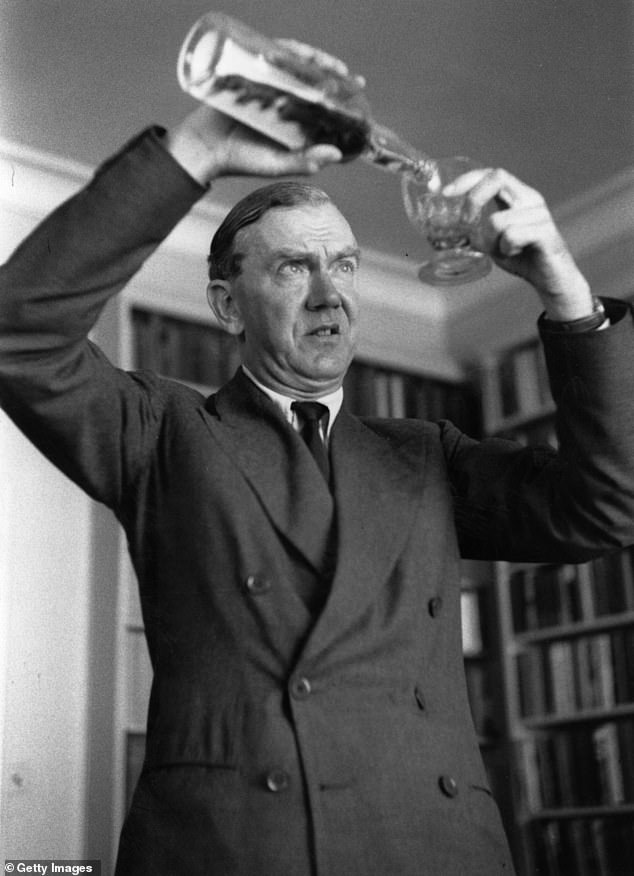 There’ll be small marble-topped tables and rows of exciting bottles. The appeal is in ‘its granting of warmth and sympathy, its promise of relaxation and good grace’ — what Burgess, raised in a Manchester pub, called ‘an almost hallucinatory glow’, particularly if you can avoid ‘shatteringly loud music’ from jukeboxes or horrible microwaved food on a gastro-pub menu.

Writers, however, reliably over-do things. Though Graham Greene consumed on a daily basis ‘quantities of spirits and wine’ that doctors even then considered injurious to health, yet lived to be 86, other scribblers are seldom so fortunate.

Patrick Hamilton, for example, the author of Rope and Gaslight, and other novels, plays and films (directed by Alfred Hitchcock) about ‘emotional cruelty and frustration’, started the day with four doubles and went on from there.

Palmer estimates Hamilton spent an annual £40,000 in today’s money on drinks, tips and taxis. ‘He became incontinent and had to have constant nursing attention.’

John Cheever, who had vodka for breakfast, was renowned for leaving ‘gin bottles outside his door for the maid to dispose of’. He was ‘the brightest person in the room until ten o’clock, when he fell over drunk’.

Cheever went everywhere with a Thermos flask of dry martinis, and his behaviour was unpredictable. In the middle of an interview for a prestigious magazine, he stripped nude and jumped into a pond. Cheever was later convinced he was an inmate in a Soviet prison, though he always resided in New York. Flann O’Brien was a civil servant in Dublin who’d finish work by 11, to get to the bars in time for first-knockings. He drank so many bottles of Bass his face went black. He thought he was being thoughtful to his landlady by hiding his vomit-stained suit under the mattress. 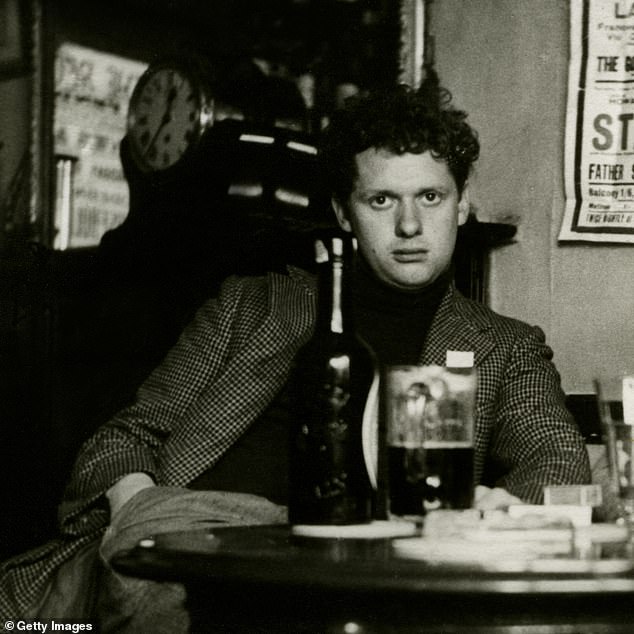 Dylan Thomas (pictured) who died at 39, would bark like a dog and groped women while drunk at dinner parties

The day he was discharged from a drying-out clinic stone-cold sober, he broke his leg. But you can forgive a man everything who invented ‘emergency trousers’, which held four bottles of stout in each pocket.

The most notorious drinker is of course Dylan Thomas, paunchy, red-faced and dead at 39. Caitlin, his wife, said he never once spent an evening at home. He was a silly drunk, given to obscene prattle at dinner parties, where he groped the women and barked like a dog.

Palmer intriguingly argues that Thomas was deliberately and cunningly irresponsible and infantile. By being helpless, others would have to look after him.

Thomas earned a lot of money, which mysteriously always vanished and he carried on cadging.

The side-effects of heavy drinking are well-known: heartburn, eczema, night sweats, insomnia, aching teeth, depression and piles — Burgess was a martyr to haemorrhoids. Plus, the obvious ones, cirrhosis and kidney failure. So why do authors, intelligent creatures on the whole, do it?

With Hamilton, it was down to the facial injuries he’d received in a car accident, and he drank because girls didn’t fancy him — all this severely affected his emotional life. 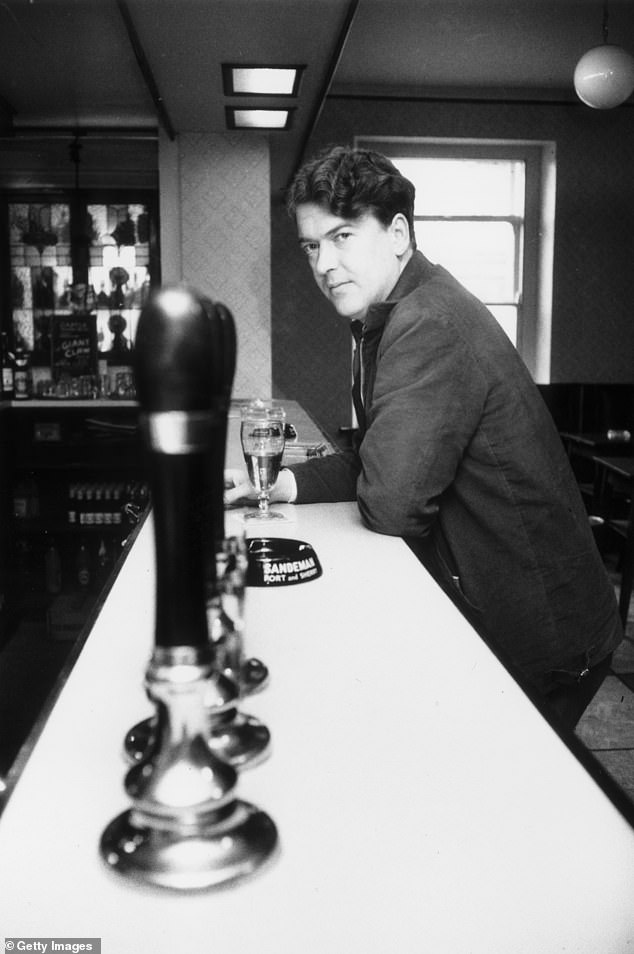 John Cheever had a sense of isolation and exclusion because he was guiltily homosexual. Poet and novelist Malcolm Lowry drank after-shave and hair tonic when the tequila ran out, as he was ‘the butt of jokes’ for his small penis. ‘Very heavy drinking served as a replacement for and suppressor of sexual desire,’ says Palmer in psychoanalytic mode.

Jean Rhys, drunk all the time on Pernod, said: ‘Happiness is a fleeting thing, not to be expected from life, but to be snatched occasionally from sex and drink.’

For myself, it’s the one or the other, not both. Also, in old age it is not a good idea to do anything that risks a nosebleed. Still, at least I am not poetess Elizabeth Bishop. Getting ‘quietly stewed’ because her mother was in the county asylum, she was sexually assaulted by uncles and was ‘fundamentally lesbian’ into the bargain. The drink, says Palmer, is ‘a friend and a destroyer’.

Nevertheless, In Love With Hell is a bad title, overstating the case, for the authors discussed in this book still produced masterpieces. Their genius was not marred. Everyone thought Jean Rhys had died after the war, for example. In fact, she was living in Devon, ‘a mad, drunken old woman’ who was writing Wide Sargasso Sea, published in 1966 to acclaim. She was made a CBE in 1978. 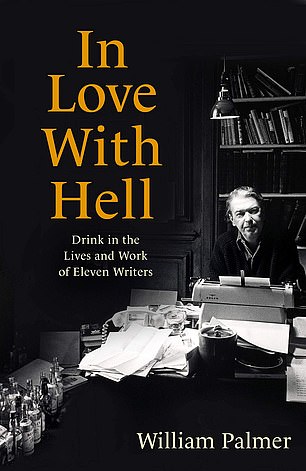 Hamilton wrote ‘his finest works’, including Hangover Square, when seemingly incapacitated. The pie-eyed Cheever produced stories ‘in almost perfect form in first-draft within a few days’.

Lowry wrote Under The Volcano, ‘a highly organised work that builds in power and meaning’. Dylan Thomas, despite the Oliver Reed antics, composed classic poems such as Fern Hill and Do Not Go Gentle Into That Good Night, let alone the radio play Under Milk Wood.

Flann O’Brien’s At Swim-Two-Birds and The Third Policeman are beloved. Burgess kept up a torrent of novels, reviews, film scripts and translations, even if the garden filled up with empties.

Sir Kingsley Amis, obese and unable to walk more than a few yards, published ten books in his last years, including The Old Devils, which does for drinking what Macbeth did for murder.

With everyone quick these days to make moral judgments, I don’t know what lesson we are to take away from Palmer’s book. That everyone should cut down and do Pilates? Palmer may have made more of a case if he’d analysed smoking — Burgess died of lung cancer and Dylan Thomas was fatally bronchitic. In contemporaneous photographs, everyone else has a cigarette in their hand.

My own view with drink, like it or lump it, is the same as Kingsley Amis, who believed people who pour small measures are ‘inadequate members of the human race’, lacking all merriment and generosity of soul.

So here are the other greatest words in the English language: ‘Knock that back and let’s have another.’