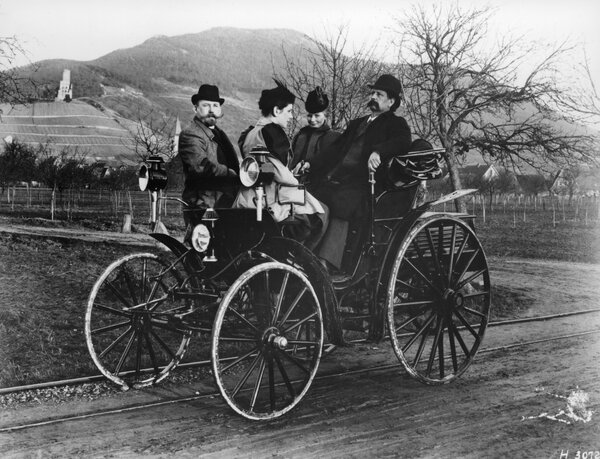 A BRIEF HISTORY OF MOTION
From the Wheel, to the Car, to What Comes Next
By Tom Standage

The problem with electric cars, their cost and range aside, is that they deprive the private motorist of choice, limit his personal freedom and confound his sense of agency. A driver cannot simply opt to travel from city to city at will, but must plan his route with care, and then stick to it, to be sure of encountering battery-charging stations along the way. The magazine Electrical World and Engineer, not a publication famed for championing libertarian views, was a vocal supporter of the driver’s cause: “One does not wish to limit his country tour to lines of travel along which he can strike charging facilities. … [One] wants to have a certain liberty of action, which a journey fully prearranged does not and cannot give.”

As one might suspect (from the exclusive use of he and his) this is not a recent text. It dates from 1902, long before Elon Musk was the faintest glint in his great-grandfather’s eye. Electric cars, it reminds us, are nothing new. Such conveyances may have been thought of and invented early on, but they went out of fashion for well over a century.

This is one of a score of amusing reminders that find their way into Tom Standage’s eminently readable history of 5,000 years of human movement — movement undertaken not by foot or by feather, but by way of the wheel, the profoundly simple device that is currently believed to have been invented in what is today Poland or Ukraine about 3500 B.C. (China, inventor of most everything else, certainly came up with the wheelbarrow, but the twin wooden discs on which this farmers’ godsend ran 3,000 years later were based on an essentially imported Western technology.)

Just as with modern humankind’s hesitancy to adopt electric cars, so with the wheel itself, which took some while to become popular. The Poles or the people of the Pontic steppe may well have enjoyed the wheel’s mechanical advantages (not slicing them from logs as we used to think, but battening together planks to give them a bigger and so more useful diameter), but the Egyptians still preferred sliding their pyramid stones along, and the idea of building wheeled wagons to be hauled by beasts (or slaves) did not dawn on the valley civilizations of the Nile, the Indus or the Yangtze until much later.

And long after the wheeled vehicle became a commonplace, for centuries many preferred riding horses to juddering along rough terrain supported merely by unforgiving circumferences. A sure-footed animal makes for a far better shock absorber than a rim of wood or iron, and until springs and rubber came along, the wagon and the carriage were employed more for cargo than for comfort-seeking passengers.

The Transition to Electric Cars

How the Lancaster was more than just an aircraft

Game of Thrones: Drogon was NEVER meant for Daenerys – His fate was sealed in FIVE words