Each week, Benjamin Law asks public figures to discuss the subjects we're told to keep private by getting them to roll a die. The numbers they land on are the topics they're given. This week he talks to Malcolm Gladwell. The Canadian author, 56, is a staff writer at The New Yorker. He hosts the Revisionist History podcast and is the author of bestsellers including The Tipping Point and David and Goliath. His latest book is Talking to Strangers. 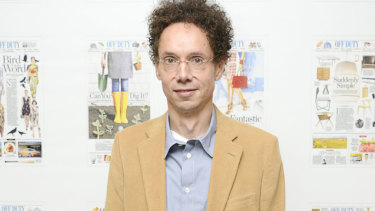 ‘Religiosity is a way of organising your thinking. It helps you set priorities; it helps you put things in perspective.’Credit:Getty Images

What was your first job in writing and publishing?
I was 22 years old, making $11,000 a year, as the assistant editor on a magazine in Bloomington, Indiana, called The American Spectator. I had to watch my pennies, but I never went hungry. After all, I grew up Canadian and middle-class – just about the most privileged position you can have in the world.

You split your time between writing, public speaking and recording your podcast. Do you have criteria about what work you say “yes” and “no” to?
If it’s not fun, I say “no”. Four years ago, I’d never done a podcast before, knew almost nothing about it, and said “yes” precisely because of that. I was 50 and thought it’d be fun to start something new. It’s important to experiment with things that are a little outside your comfort zone, because the biggest danger in any creative field is that you get stale.

What’s your greatest extravagance?
I don’t really have extravagances. I have a lot of running shoes. [Laughs] I buy a large number of them. And I have a bad used-book habit. I buy lots of books, more books than I can possibly read.

What’s an extravagance you’ll never understand?
Enormous houses. It’s always struck me as kind of soulless. Why would you want to live in a house that’s 20,000 square feet? Why live in a house with 10 bedrooms, when you can only sleep in one? Weird.

You helped her acquire that; is that what you mean?
She’s my mother; I would hope so!

You’re a Canadian citizen, but you live in the US. Do you vote in either country?                        I don’t vote in Canada because I don’t have a residence in Canada anymore. And I’m not an American citizen. So I don’t actually vote anywhere. I don’t think I’ve ever voted in my life in any election.

Wow. How do you reflect on not having ever participated in a democratic process?
I left Canada when I was 20 and haven’t gone back. There were no elections from my 18th to 20th year in Canada, so yeah, never voted. It does irritate me that I can participate in the public life of the country, pay taxes and not be able to vote. I don’t understand why voting is reserved for US citizens. It’s a sore point for me.

How do you see US politics at the moment?
Well, it’s a bit of mess. I’m hopeful that in a year and a half, things will straighten out. Trump is actually a historically unpopular president. It should be relatively easy, I hope, for someone to unseat him. Once he’s gone, I’m hoping people will give a deep sigh and go back to normal.

If you could vote in the US, what would be the No. 1 issue for you?
Reforming the healthcare system. There’s probably no aspect of American life that’s more dysfunctional. It manages to be both the most expensive system in the world, by a long shot, and also the least comprehensive system. The worst possible combination of traits.

You grew up Presbyterian in a Mennonite community in southwestern Ontario. How did you practise Christianity in your family?
I come from a very religious background. We were regular churchgoers; my parents were both very devout. My brother went to the seminary, he married a minister and I have two, maybe three uncles who are ministers as well.

A big family tradition, then.
The Gladwells are pretty heavily immersed in the world of institutionalised religion. I’m not one of those people hostile towards organised religion.

Is it true that the period in which you wrote David and Goliath saw you rediscover your Christian roots, from which you’d strayed after moving to New York?
That book had the effect of reawakening my respect for religious faith. Religiosity is a way of organising your thinking. It helps you set priorities; it helps you put things in perspective. What writing that book did was bring the religious perspective back to the centre of the way I made sense of things. You remind yourself you don’t belong at the top of the hierarchy.

Your work makes order of complex phenomena. Is there a parallel between your religiosity and your writing?
One of the things religious thinking fills you with is wonder for the majesty and richness of the world. It encourages you to appreciate how extraordinary God’s creation is. That sense of wonder and appreciation feeds a lot of my writing. That’s the kind of driver to a lot of things that I explore – this kind of enormous appreciation of what is important in this incredible creation we are part of.

To read more from Good Weekend magazine, visit our page at The Sydney Morning Herald, The Age and Brisbane Times.

The teacher who gambled £4m