Lies, damned lies – and the saps who believe them! Author examines classic cons and how to tell untruths successfully in an eye-opening new book

THE TRUTH ABOUT LIES

‘Tell me lies, tell me sweet little lies,’ sang Fleetwood Mac in 1987. And my, have people delivered. Donald Trump is said to have told 30,573 lies while in office, while Boris Johnson, as we all know, can be economical with the truth. I had a friend who lied to me serially over more than 30 years, about absolutely everything. He is my friend no longer.

But Aja Raden, an American writer, sees lies as a completely normal part of life, something to be understood rather than condemned.

She says human beings evolved to tell lies, that our children only start operating in the real world when they have mastered the ability to tell untruths. There’s no one who doesn’t lie occasionally. 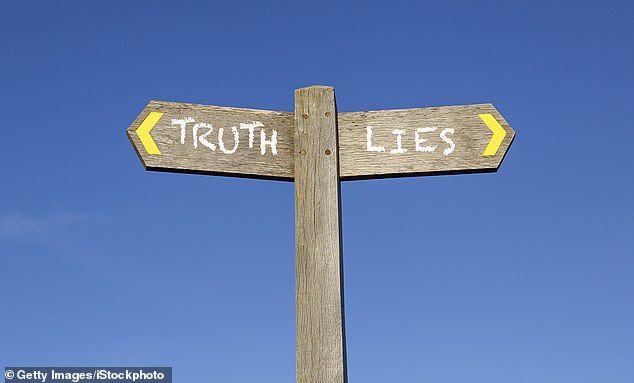 American writer Aja Raden, tells the stories of several classic cons in a new book about the value of lying in normal life (file image)

Even George Washington, when he said ‘I cannot tell a lie’, was telling an absolute whopper.

Her main point is that for someone to lie successfully, there needs to be someone else who swallows that lie hook, line and sinker. Think of the last piece of really juicy gossip you were told. You didn’t check whether it was true or not before you started spreading it yourself. Of course you didn’t! Neither did I.

Over nine hugely entertaining chapters, Raden tells the outrageous stories of several classic cons and illustrates the mechanisms by which they all work, using both contemporary and historical examples.

Its core question, she says, is ‘Why do people believe what they believe?’

We blindly trust certain facts: things we’re taught, things we can observe or work out for ourselves. Once we ‘know’ these things, we never really question them again. It’s called an honesty bias.

‘Without this tendency to trust, to assume, to simply believe, every human on earth would be born starting from scratch, unable to benefit from the knowledge of the collective.’

But it’s the ‘honesty bias’ that allows us to be rooked by conmen, serially lying friends and unscrupulous U.S. presidents. Our strength, as so often, is also our weakness.

She begins with what she calls the Big Lie, in which the untruth is so enormous that to disbelieve it actually threatens our sense of collective reality.

So if someone says to you, ‘I own land on Mars and I’m selling time-shares,’ you might believe that because no one would say something like that if it were untrue, surely? (My brother did believe it and bought me some land there for my birthday a few years ago.) 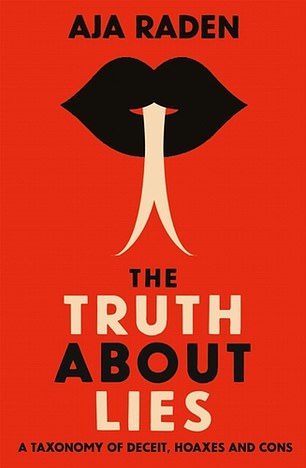 So she gives the example of Gregor MacGregor, a broke Scottish aristocrat of the early 19th century who joined the Royal Navy in search of fame and fortune.

He became a mercenary in central America, where he claimed to have chanced upon the magical kingdom of Poyais, a land of plenty brimming with untapped natural resources.

Returning to London he sold shares in Poyais to the great and good, and persuaded seven boatloads of men, women and children to relocate there to make their fortunes.

When they arrived they discovered Poyais did not exist, that there was just the Mosquito Coast of central America, short on untapped natural resources but well equipped with mosquitoes.

Most of them died, and when a few managed to return to tell their stories, MacGregor escaped to Paris, where he told the same Big Lie again — and sold more shares in something that did not exist.

Next up is the Shell Game, the street hustle whereby you have to guess which of three shells on a table has a ball underneath it.

The ball has meanwhile been removed by sleight of hand so the answer is ‘none of them’, but by then you have already lost the fiver you put down on the one you thought it might be. Raden explains that we don’t ‘see’ everything we think we see, that our brain fills in the gaps.

In later chapters she looks at the Guru Con, at the way Rasputin befuddled the House of Romanov in pre-revolutionary Russia, the pyramid schemes of Bernie Madoff and bitcoin; and the selling of snake oil as a patent medicine in the Wild West, which went on long after supplies of genuine snake oil had run out.

I assume it’s true. But if she had made some of it up, I wouldn’t be at all surprised.

Idris Elba is writing a book collection inspired by his daughter