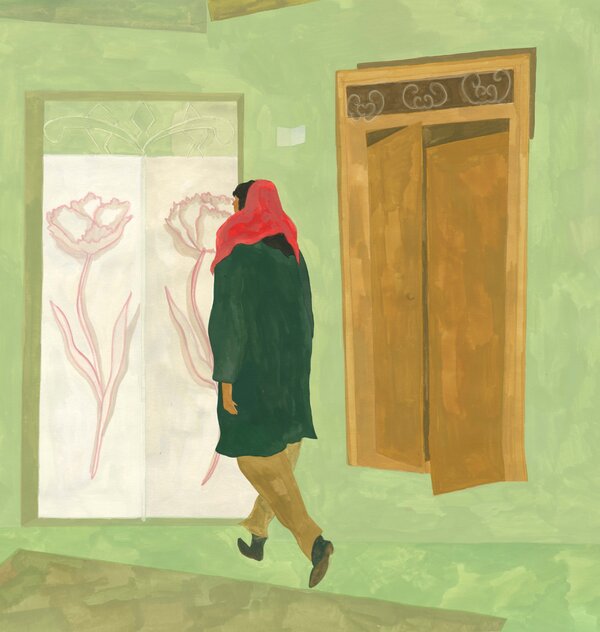 IN CASE OF EMERGENCY
By Mahsa Mohebali
Translated by Mariam Rahmani

Shadi, a young opium addict, is angling for her next hit. It’s the early 2000s, an earthquake has struck Tehran and it’s unclear if the trembling inside her is geological or physiological (probably both). At home, her family is going to pieces: Mom howls with anguish while massaging prayer beads, Grandma is missing, Father is absent, possibly philandering. Shadi shuts her eyes and sucks hard on the dregs of her disappearing stash.

Outside, the capital is in a state of bedlam as the haves, which is to say the “rich kids and their Land Cruisers and their plastic noses,” flee the city. Tehran appears as a tangle of bodies in motion — fighting, jesting, dancing, a sensory bath of sound and touch and smell. But the most vivid sensory experiences are Shadi’s more than occasional drug trips:

“The little creature comes up through my legs and leaps into my stomach. Explodes into a thousand pieces, pieces that wiggle in my stomach and cascade down my legs and swim through my veins like tadpoles. The tadpoles go down and then pull themselves back up and release themselves into my pelvis, a thousand of them rushing down a channel into a single little swamp.”

When Mahsa Mohebali’s novel “In Case of Emergency” was first published in Iran in 2008, its antic portrait of a mind and a city on edge ruffled pious sensibilities. Written Farsi, like Arabic, is an ornate, almost courtly language, and the book’s use of colloquial slang struck many critics as libertine and louche — certainly unliterary. (A sex worker is referred to as “Cheetah Girl”; a cross-dresser is described in the original text as tiransfir-miransfir, a hybrid Farsi-English pun.) The Ministry of Culture demanded 87 deletions from the text, the bulk of them curse words. More subtle profanities were spared, including ich komme, or “I’m coming” in German. (One accident of globalization is the popularity of German porn in Iran.) The book was an unlikely success, blowing through six printings in six months. In 2010, it won Iran’s prestigious Houshang Golshiri award.

Mass disaffection and disillusionment provide the emotional weather for Shadi’s zigzag day in search of a fix. The people she encounters along the way reflect a gallery of misfits as dejected as she is, a generation squeezed between the broken promises of a revolution and the airlessness and nihilism of contemporary life. The image of the highly educated, unemployed youth who indulges in bodily vice has curdled into cliché in writing about contemporary Iran, where opium use per capita is higher than anywhere on earth. In some quarters, it’s easier to score a hit than to get a decent meal.

In the aftermath of the earthquake, the youth claim the city as their own. “Put your ear to the ground like me and listen,” Shadi says. “Listen. The streets are speaking. I can hear the pavement cracking. Snapping and sputtering, cracking its knuckles after a long day.” That Mohebali’s book came out one year before Tehran’s streets erupted into the largest antigovernment protests since 1979 gave “In Case of Emergency” the flavor of prophecy. At Friday prayers, a bulletin was distributed suggesting that the book had served as a blueprint for protesters; it was banned shortly thereafter. The author herself has said that the story was inspired by riotous celebrations after a football match: the simultaneously eerie and exhilarating feeling that Tehran is sitting on a pile of matches, ready to go up in flames at any moment.

The deployment of heavy symbolism and allegory to escape censors’ overzealous scissors is an old game, as true in the shah’s Iran as in the revolutionary regime that followed. And while the roiling, earthquake-struck city aptly evokes the spiritual malaise that afflicts this nation of 83 million, there’s a danger in reading “In Case of Emergency” simply as a political parable. To do so is to jettison its literary and sensual qualities in the name of a facile takeaway. Sheekasteh is the Farsi expression for the kind of visceral, idiomatic slang that characterizes this book’s prose — nimbly translated here by the scholar Mariam Rahmani — but the word literally means “broken.” The novel’s most compelling transgression may be linguistic, the tectonic shift it represents in Iranian letters.