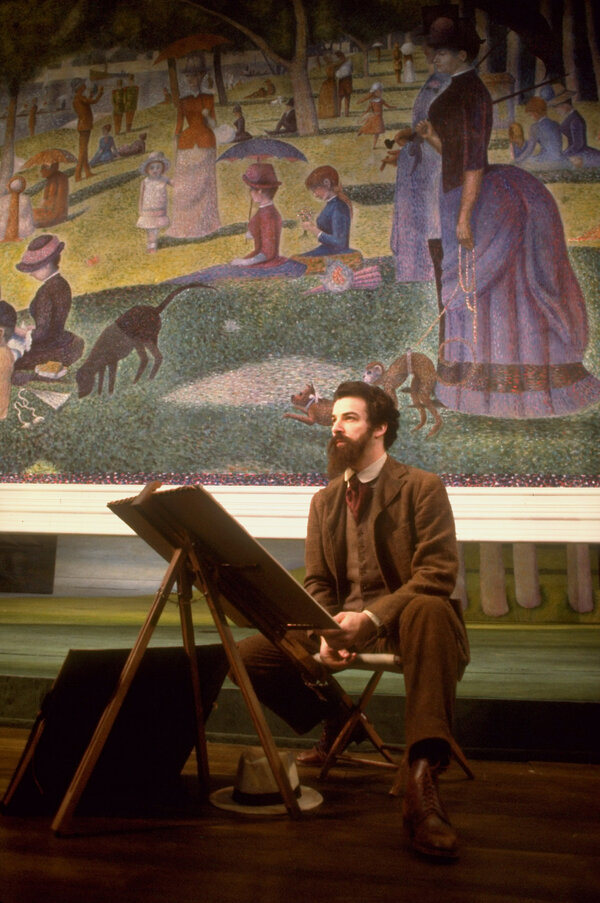 The Art of Making Art

Thank you for Alan Cumming’s insightful review of James Lapine’s new book on creating the musical “Sunday in the Park with George” (Aug. 8). What a treat to see Martha Swope’s beautiful photograph on the cover.

It made me smile to remember what a masterpiece they all created and how beautifully Swope captured it. How wonderful that Lapine has also captured and presented the memories of creating this amazing production. And no matter how difficult Mandy Patinkin might have been, he will always be the quintessential Georges Seurat.

Within the review, Lapine’s book. James Lapine! So agile, so complicated. I was satiated by the review and now am ravenous to read the book.

Within the book, the remarkable collaboration with Sondheim. Stephen Sondheim! So soaringly inventive, so endlessly generative. I now yearn for anything and everything ever created by Sondheim, but especially this surprising and suspenseful tale. Why, oh, why, did I never see the incomparable Patinkin in his portrayal?

And at last, within the Lapine-Sondheim story, the Seurat painting itself. Georges Seurat! So precise, so impenetrable. I am newly lost in the painting, wandering among its shadows and peering into the faces under their straw brims. I am lying on the mysterious grass knolls of Seurat’s garden, satisfied and inspired, ravished and slightly stoned.

In reference to Zoë Lescaze’s review of Edward Slingerland’s “Drunk” (Aug. 1): In these times of rampant puritanical moralizing about personal health habits, it is wonderfully refreshing to read about a book that “extols the pleasures of drinking in moderation — and occasionally in excess — for their own hedonic sake.” Having the taste buds of a 10-year-old, however, I prefer to indulge in candy bars, so I’m eagerly awaiting a book that takes an equally liberal attitude toward my own vice of choice.

Aren’t there enough ads glamorizing alcohol without the Book Review choosing to review a book saying our species needs to get hammered “to innovate and survive”? I barely survived a childhood with two alcoholic parents. There are boatloads of books published that you can review. Why pick one perpetuating a devastating addiction?

I am writing this to highlight an unacknowledged debt and to add some nuance to David S. Reynolds’s review of Alan Taylor’s “American Republics” (July 4). Reynolds gave him singular credit for uncovering regional and sectional schisms in the Revolutionary period, proclaiming that no other history of that period “emphasizes the fragility of the American experiment as strongly as Taylor’s book does.”

I know it’s been a long time, but my book, “Sectionalism in American Politics: 1774-1787,” did just that 45 years ago. Taylor makes no mention of it, which I find odd from a reputable, prizewinning historian.

Sectionalism, the seminal topic in Taylor’s book, is, after all, the first word in my book’s title. My mentors taught me that historians owe a debt to those who came before.