It's not often that a taut and tense thriller that has been sold for publication to 36 countries and for a screen adaptation to Paramount Pictures in a deal that could net its author a seven-figure sum has its origins in Aristotelian moral philosophy.

But then there aren't many books like crime writer Adrian Mckinty's new novel, The Chain. 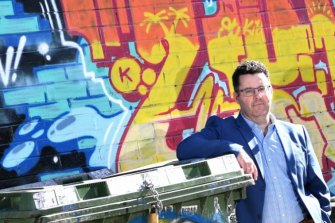 Adrian McKinty’s life is likely to be changed with the publication of The Chain.Credit:Joe Armao

It's very different from his six Sean Duffy novels, about a Catholic detective serving with the Royal Ulster Constabulary during the Troubles in Northern Ireland, from his three Michael Forsythe novels about a Belfast man negotiating the New York underworld, his Lighthouse trilogy of sci-fi books for young adults, and certainly from his historical crime novel, The Sun is God, set on a south Pacific island where a group of Europeans worship the sun and eat only coconuts.

The Chain is one of those books that grips you from the off and keeps you in its compelling grasp until, almost breathless, you emerge at the other end.

The premise appears simple. Rachel, a divorced mother suffering a recurrence of cancer, gets an anonymous phone call informing her that her teenage daughter Kylie has been kidnapped. But while a ransom is demanded, winning Kylie's freedom is not as straightforward as paying it. No, Rachel must kidnap another child in order to free Kylie, who has been kidnapped by parents whose own child has been snatched. 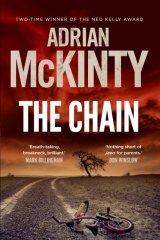 And so it goes on … a chain of kidnapping, extortion and dismay. If the chain is threatened, the people behind it promise to unleash the severest punishment. And who are the people who set up the chain? Well, that would be a spoiler too far.

McKinty says the way he writes is through character and atmosphere. "The first thing I needed to do was nail down Rachel, who she was and what her personal situation was, because I knew I was going to take her into a bit of a philosophical and moral nightmare."

McKinty studied philosophy at Oxford University and has even since been intrigued by Aristotelian moral theory.

"Aristotle would say there are no good people or bad people, only people who act in good ways or bad ways. I was running with that idea and I thought it would be interesting to take a really morally good person and put them through this time of testing and see what would happen."

As a precocious teenager growing up in Carrickfergus in Northern Ireland, he was obsessed by the story of Demeter, who went into the underworld to rescue her daughter Persephone from the clutches of the god Hades: "I really liked that idea, but also that not all of Persephone comes back …"

McKinty had also been terrified by the sorts of chain letter going round his school and threatening all sorts of terrible consequences to anyone who broke the chain. "When I was a wee boy, those were terrifying."

The final part of the jigsaw was lucked upon while in Mexico City trying to write a novel about the assassination of Leon Trotsky – "I got there and realised it was just horrible; such a hackneyed premise" – when he discovered how local crime gangs had a new model of kidnapping that allowed people to be swapped with other family members to allow a ransom to be raised. "It was all done as a kind of business."

Everything came together and McKinty reckons the story almost told itself, or at least the first two thirds. "It was all quite clear to me." He reckons the taxing part was the final third.

The Chain has endorsements from a host of big-name crime writers – Ian Rankin, Don Winslow, Val McDermid – and looks set to make a significant difference to McKinty's life, especially if the film does get made. He has shifted from St Kilda, where he lived for 10 years, to New York with his academic wife and two daughters.

And he has at last got himself an agent, which has made all the difference because he came close to giving up the writing game.

"I've been writing these books for years and years and I've loved doing them and I've been proud of them, not just Duffy. I felt I was screwed to my artistic mission but the only problem I was never making any money out of it. That was the trouble. Great reviews, winning awards [McKinty has won an Edgar in the US and two Ned Kellys in Australia] but nobody was ever buying the books. It would be lovely if this book finally got an audience."