My grandparents were Jews from Poland who survived the camps, moved to Los Angeles and ignored each other for the next 60 years. My grandmother dealt with her experience of evil by becoming harder than a Yiddish consonant. Her one-word verdict upon exiting the only movie she ever took me to was, “Smut!” That movie was “The Muppet Movie.” This was irreconcilable with my grandfather, who went to the opposite extreme. Enslavement in a Nazi munitions factory had left him deaf, but in America he developed a sensitivity to the tiniest vibrations of joy. He’d shuffle through North Hollywood gobsmacked by vintage cars and dandelions. Once, tears streamed down his cheeks while we watched a Lakers game on TV. Verthy, Verthy, he whispered. James Worthy. He could find evidence of God in a small forward.

“Plunder” is a book in which both my grandparents would recognize themselves. It’s about Jews from Poland, some who escaped the Nazis and many more who didn’t. It’s also about extreme responses to the incomprehensibility of the Holocaust. So, not a comedy. At least not at first.

Driving the action is the author, Menachem Kaiser, a Canadian in his mid-30s who knows nothing of the giant banana peel he’s stepped on when he peruses some documents belonging to his paternal grandfather. The grandfather, Maier Menachem Kajzer, was the only member of his family to survive the Holocaust, and he spent years trying to reclaim their apartment building in Sosnowiec. He died of heart failure long before his namesake was born. The claim was never filed. 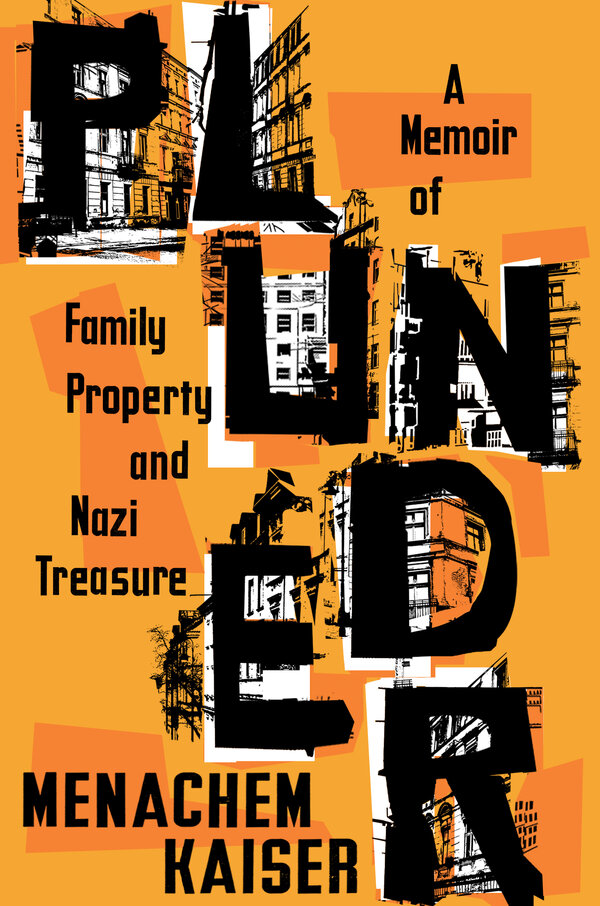 Almost two decades after Jonathan Safran Foer’s “Everything Is Illuminated,” Kaiser knows the trope of the young Western Jew truffling through his European roots. He owns being a “memory-tourist,” “dancing my stupid nostalgia dance,” but he seems too emotionally precise to get swept up by whimsy. “Our grandfather was a survivor,” Kaiser writes. “He went through what he went through, it’s our legacy, but we, or at least I, have never felt particularly disturbed by this legacy.” Still, the file of documents, and the solidity of its facts, appeals to him. “Here was an opportunity, I thought, to allow myself to be disturbed. The building, maybe, was a means to access a history, a person, that I’d always thought inaccessible.”

And so to Poland. There, Kaiser meets an octogenarian lawyer nicknamed the Killerwho specializes in Jewish property claims. She takes the case, estimates the building’s worth in the mid-six figures and warns Kaiser not to “mess everything up” by going for a visit. She knows her client better than he knows himself. As shtetl fever takes hold, Kaiser cases the drab structure at Malachowskiego 12, and then, under the cringeworthy pretense of writing an academic history of the building, he interviews a resident. “This is my family’s house,” the man says innocently. “My heart skipped,” Kaiser writes. “Here was his story intruding on mine, or my story intruding on his — and in that moment I regretted coming here, asking for interviews, meeting and getting to know and becoming attached to people who would be, no matter how generous my outlook, no matter how right-minded my intentions, adversaries.”

It’s also in that moment that “Plunder” comes alive — because the facts Kaiser has built his expectations on turn out to be all wrong. A rereading of the file shows that the building his grandfather was trying to reclaim wasn’t his home but, rather, an investment property. “I went to my grandfather’s hometown to see an address associated with my grandfather, so of course this was his home,” writes Kaiser. “The narrative had gotten stuck in a kind of sentimental default. Visiting an ancestral home is more meaningful than visiting an ancestral investment property, no?” Oh, and Malachowskiego 12 is the wrong address. The actual building is down the street. Genealogists know that near-facts are the scourge of the trade, and Kaiser’s experience isn’t unique; everyone he meets on the Polish ancestor trail builds myths on sand. But he’s smart enough to recognize slapstick, and he facepalms well.

If the facts in “Plunder” are unreliable, they do sometimes flip in Kaiser’s favor. Around the same time he engages the Killer, Kaiser feels compelled to explore Silesia, a region of Poland that’s less “Shoah” and more Indiana Jones. It’s home to Project Riese, a series of massive tunnels dug by the Nazis — or rather their Jewish slaves — in the Owl Mountains. Historians are baffled by the place and it’s become Poland’s Area 51, a magnet for treasure hunters chasing everything from Nazi gold to U.F.O.s. On a tour with some amateur treasure hunters, Kaiser is stunned by the scale. “What is going on here? What was it they were trying to accomplish? And on top of that the mystery is itself a mystery: Why don’t we know? How is it possible that a project like this is off the historical grid? I was beginning to understand whence the obsession.”

Afterward, he hears the guides murmuring his last name. The men are discussing Abraham Kajzer, a Holocaust survivor who labored on Riese and whose obscure memoir, “Behind the Wire of Death,” is their subculture’s ur-text. “One of the most important men who went through the war, Jew or Pole,” they explain. When they tell Kaiser their hero grew up in a Polish city far from Sosnowiec, you know what’s coming. A cursory check of Kajzer’s memoir, sold in a Riese gift shop, reveals he’s actually from an adjacent town. “Abraham and my grandfather were first cousins,” Kaiser discovers. And Abraham had siblings, and those siblings produced children who are still alive. “Just like that the family went from extinct to not-extinct.”

As word gets out about the Kajzer-Kaiser connection, the author becomes the treasure hunters’ mascot and new legends about Abraham are born. “Very quickly the story became that I was his grandson … because that story is the better story.” These men provide a different kind of disturbance than Kaiser initially sought. They dress like commandos, dig for Nazi artifacts and smother him in noogies and vodka. Visiting the museum room of one of his original Riese guides, Kaiser writes, “Andrzej was not a skinhead, even if the skinhead and Andrzej might have similar ideas regarding interior design.”

This is weird, complicated territory — by which I mean it’s fantastic. Kaiser’s new friends are fun, and their lack of overt anti-Semitism is a pleasant surprise. Still, he sees right through the rot of those who swear Riese is a U.F.O. site or holds the blueprints to Hitler’s time machine. “Beneath the outlandish assertions lurks an insidious claim — that your understanding of the war is wrong. … The genocide is made incidental.” He’s far warmer toward collectors like Andrzej. Both of them are just trying to get closer to ghosts through objects, even if some of those objects are a little startling. “In the United States a swastika is hard to see as anything but a deliberate provocation and a sign of affiliation with Nazi ideology. But here? These were literally buried artifacts. They stood for what was dead and gone.”

“Plunder” thrives as a morally complicated travelogue, but when the action slows — and the Polish legal reclamation process is, uh, not swift — things can get a little hairy. A chapter of rhetorical dialogue about reclamation ethics comes from nowhere and goes nowhere, and the author’s conversations with his living relatives feel stifled, like something’s being held back. It’s not the first book that would benefit from 50 pages falling out of the binding.

But it is original, and it finishes strong. Kaiser chases down the facts (fingers-crossed) of Abraham Kajzer’s story, and they devastated me. It’s not spoiling things to say that Kajzer survived the absolute worst humanity had to offer only to abandon life’s greatest reward. From the distance of all these years his choice is incomprehensible. It’s our duty to try to understand anyway.