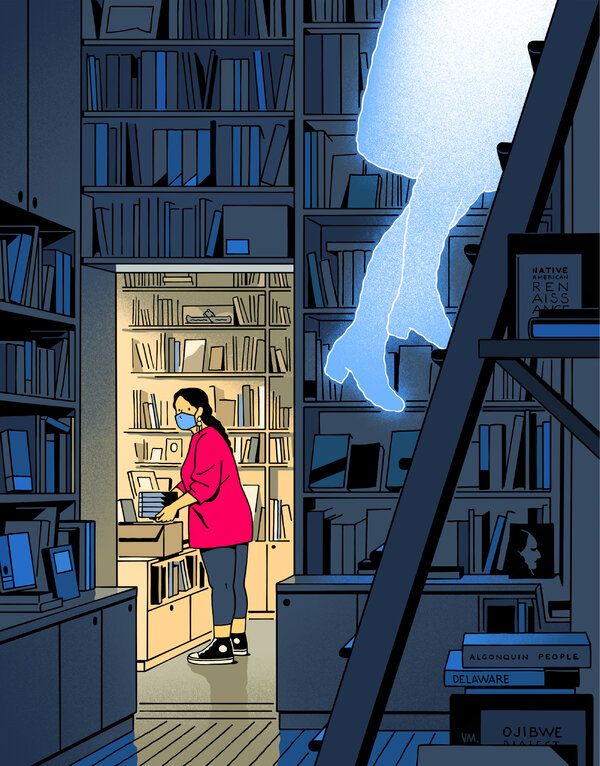 THE SENTENCE
By Louise Erdrich

Some people spent their pandemic confinement learning a new language, refining their cooking skills, increasing their step count or gardening. Louise Erdrich spent the time writing a novel. Specifically, she wrote a ghost story, “The Sentence,” and the further you read in this engaging account of what happens after a loyal bookstore patron dies and her ghost refuses to leave the store she loved, the more apt Erdrich’s choice of genre seems. Set mostly in the year 2020, which itself came to seem haunted as Covid spread and the deaths piled up, this novel restores to us all the messy detail of an almost amnesiac time when, worn down and exhausted, “we skied weightlessly through the days as if they were a landscape of repeating features.”

At first the ghost of Flora, an elderly customer who dropped dead, haunts only Tookie, the narrator, a middle-aged Native American working in a Minneapolis bookstore that specializes in works about Indigenous people. In life, Flora was a pest who with annoying self-righteousness never stopped wanting to be a Native American. Tookie remembers “how once she had told me I couldn’t talk about being ‘Indian’ or ‘Aboriginal,’ but should always say ‘Indigenous.’ I’d told her that I’d call myself whatever I wanted and to get the hell out of my face.”

What Tookie calls herself is another matter. Because Flora is not the first of Tookie’s ghosts. She is haunted by her mother’s addiction and death, haunted by a misspent youth and her time in prison, and though she is resilient, she is haunted by the idea that there is something flawed about her — that if there is a way to screw something up, she’ll find it.

More than anything, Tookie craves normal. Normal is not her default. Normal is her ideal, where she may “live as a person with a regular life. A job with regular hours after which I come home to a regular husband.” All she wants is for her life “to continue in its precious routine. And so it has. However. Order tends toward disorder. Chaos stalks our feeble efforts. One has ever to be on guard.” Flora is Tookie’s first warning that being on guard may not be enough.

Because at first she alone feels the ghost’s presence, Tookie questions her own sanity. Is she merely projecting? Or if she’s sane and there is a ghost, then why is the ghost targeting her? Tookie is in the midst of puzzling all this out when the pandemic arrives and the world turns upside down. And then George Floyd is murdered in the same city where Tookie lives and works, and a persistent ghost is suddenly only one of her problems.

By the end of the novel, the idea of ghosts has expanded to include those parts of the past that refuse to die because we have refused to process them. “Like every state in our country, Minnesota began with blood dispossession and enslavement,” Tookie says. “Sometimes I think our state’s beginning years haunt everything: the city’s attempts to graft progressive ideas onto its racist origins, the fact that we can’t undo history but are forced to either confront it or repeat it.”

“The Sentence” covers a lot of ground, from ghosts to the joys and trials of bookselling to the lives of Native Americans and inmates doing hard time. And that’s just the first half of the story, before the pandemic, before George Floyd. The novel gets a little baggy after a while, as Erdrich struggles to juggle multiple plotlines. But the virtues here so outweigh the flaws that to complain seems almost like ingratitude.

“The Sentence” is rife with passages that stop you cold, particularly when Erdrich, who won a Pulitzer Prize for her previous novel, “The Night Watchman,” articulates those stray, blindsiding moments that made 2020 not only tragic but also so downright weird and unsettling.

Just as life veers into lockdown, Tookie is riding home with her husband, Chinese takeout perfuming the car as they drive down the dark, “empty, peaceful streets” of Minneapolis. “Why can’t it always be this way?” Tookie asks her husband.

“He gave me an odd look. I turned aside. The empty street swished beneath the tires. Perhaps I should have been ashamed. Why was it that I felt this was the world I’d always waited for?”

Toward the end, she sums up our collective nightmare as the time when “we straggled through a year that sometimes seemed like the beginning of the end. A slow tornado. I want to forget this year, but I’m also afraid I won’t remember this year.” There is something wonderfully comforting in the precise recollection of such furtive memories, like someone quietly opening a door onto a little slice of clarity.

Set in a bookstore, narrated by a bookseller whose former life in prison was turned around when she discovered books and began to read “with murderous attention,” “The Sentence” testifies repeatedly to the power books possess to heal us and, yes, to change our lives. It may be that, as Tookie argues, “books contain everything worth knowing except what ultimately matters.” But that harsh judgment notwithstanding, there are books, like this one, that while they may not resolve the mysteries of the human heart, go a long way toward shedding light on our predicaments. In the case of “The Sentence,” that’s plenty.

Grief that inspired the Bard