When you make a career of writing about food, you inevitably run out of words. There are only so many ways to say that something is sour, salty, bitter, sweet; to pinpoint a texture somewhere on the spectrum of creamy-velvety to crackly, shattery, fractures-in-the-mouth; to find an allusion for that ineffable half-flavor, half-scent that might or might not evoke a bamboo forest after rain or the dank of heavy-headed roses or the sticky hot boardwalk of a summer forever lost. See the madness? The chasm yawns between the words and the actual experience, the simple pleasure of eating food that is good.

How lucky we are, then, to have John Birdsall, a former professional cook and restaurant critic who writes broadly and deeply about food — which is to say, about culture, politics and what it means to be human. He shifts at ease between the glossy establishment (Food & Wine, Bon Appétit) and the more fractious iconoclasts (First We Feast, the now defunct Lucky Peach), all without ever losing sight of that simple pleasure.

“The Man Who Ate Too Much” is his first book as a solo author (he has co-written a cookbook) and weighs in at nearly 450 pages. This befits the stature of its subject, James Beard, 6-foot-3 and 300 pounds in his prime — “fat in a way that makes thin people wistful,” as the journalist John Skow wrote in 1966 in The Saturday Evening Post — and christened the “dean of American cookery” for arguably changing the way we eat.

But first, as Beard himself would likely have agreed: the food. Birdsall gives us the “feral sweetness and mustard bite” of turnips eaten raw. Gravy made of “flour stirred up with the recalcitrant leavings” in the pan. A smoked ham with a “goading tang of rot.” Pheasant “baked in dough-sealed crocks cracked open at the table.” Sometimes his gift is the single perfectly placed word, as when he describes a breakfast in Paris of “madly buttery rolls,” or a string of them, going off like a chain of fireworks, as when he imagines Beard as a child in coastal Oregon, searching for “shy, vulnerable summer Dungeness crabs buried at the margins of beach.”

Birdsall’s sentences have rhythm, too, and compress time and place so that a meal becomes a history, from oysters “hauled down from shoals above the terrifyingly wide mouth of the Columbia and fried in an abundance of butter” to dinner at night near Les Halles in the 1920s, then the meatpacking district of Paris, “where butchermen in bloody smocks demolished plates of tripe and calf’s brains, washing away thirst and the reek of carnage with entire bottles of cool, violet-scented Beaujolais.”

He’s just as good with people. Beard’s father was a “noisy shadow,” his mother domineering and more in need of a friend than a child, her pale eyebrows lending her a blank look, “guarded, scoured of passion.” She had run a boardinghouse before marriage and brought the same obsessiveness to stocking their larder. There was food in abundance, but it was an end in itself, not an expression of love. Growing up, Beard was self-enclosed and latent, his face “as plump and pale as milk-poached meringue,” an image half visual, half sound: the lip smack of p’s, the iambic beat of monosyllables crescendoing to a spondee — two punched-out stresses in a row — and then the satisfied slump, the soft landing at the back of the palate.

From the beginning, his was a life of secrets. From a young age he knew he liked boys, not girls. He sensed that his mother had her own thwarted love for someone of the same sex. Meanwhile, although he didn’t know it, his father had a mistress on the side who had borne a child. In an early scene, Beard eagerly awaits the unpacking of lunch on a long railway trip, thinking of those rich treats immured in wax paper, “all of it lavish yet constrained” — a phrase that might well sum up the duality of his later years.

He would go on to become a public figure who was never truly known, haunted by the youthful trauma of expulsion from an erstwhile progressive college for “an act of oral indecency” with a male professor and ever conscious of the fine line in society that allowed for homosexuality only “as long as it stayed enigmatic and implied.” Food was a stand-in for other experiences and emotions. Birdsall lingers on moments like a discovery of spring peas in a London market, which Beard took home, boiled swiftly, and dipped whole in their pods into melted butter and then his mouth, sucking out the peas: “a map of cravings satisfied in private.” 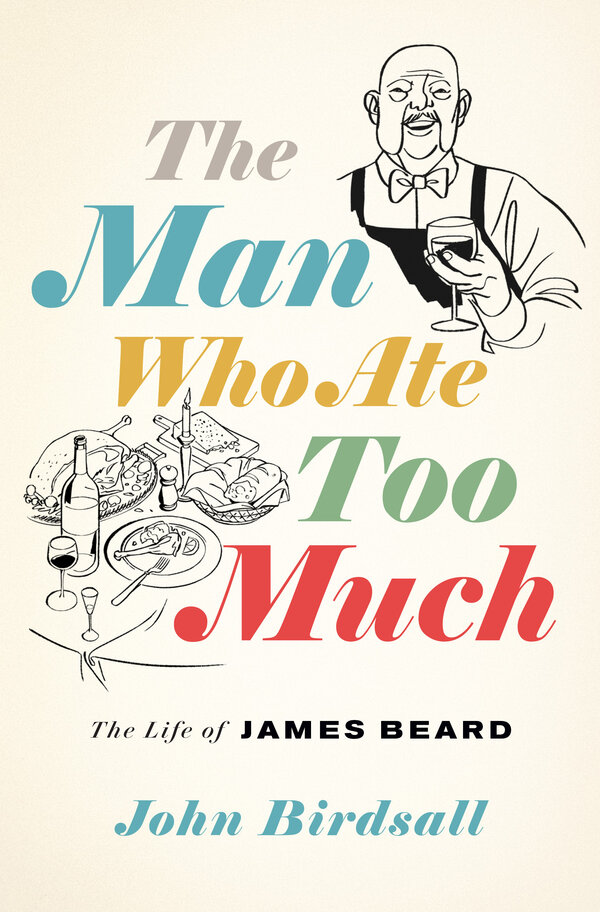 After failing to make a career in theater, Beard found his people in New York, the wealthy, urbane gay men whom the playwright Arthur Laurents called “silver and china queens”; they hosted private cocktail parties in lieu of risking their reputations at bars where any sign of queerness might be labeled “disorderly conduct.” Beard, with little money of his own but a gift for cooking and making people laugh, took on a role somewhere between gofer and impresario, mixing drinks, passing around nubs of fried battered squab as hors d’oeuvres and strategically flitting in and out of the glittering talk.

His talents were noted; a formal catering company was born; and then came the requests from publishers for cookbooks. The deadlines were impossible, the financial compensation meager, but the name James Beard went out into the world, as did his notion of what an American cuisine could be, when “cuisine” was still a word reserved for the feats of the French. He won the trust of readers as an “unfussy bon vivant, as much in love with a good club sandwich as he was with veal Oscar,” who decried the “phony gentility of the gourmet crowd” and insisted on touching food with his bare hands.

This is not biography as lionization: Birdsall notes Beard’s tendency to crib from his own recipes under the pressure of deadlines and to ignore or improperly credit the contributions of others. But he argues that Beard’s approach was essentially egalitarian, even Whitmanesque, casting American cuisine as a grass-roots “collective effort” of home cooks across the land.

In this book, the more famous Beard becomes, the more he recedes. We lose him in the crowd. Birdsall has done extensive research — this is the writer’s dilemma, to have unearthed so much great material, you can’t bear to leave any of it on the cutting-room floor — and grants elaborate paragraphs to almost every person in Beard’s circle, colleagues and enemies alike, so many of them that I kept wishing for an old-fashioned dramatis personae to remind me who they were and why they mattered. We get cameos from Truman Capote, Vladimir Horowitz and, most delightfully, Alice B. Toklas, who bakes scones and insists on dining with her back to any view, so as not to be distracted from the food.

What Birdsall is aiming for is a holistic portrait of a time and place, of an America coaxed out of its postwar thraldom to frozen foods (in which Beard was complicit, accepting sponsorship from Birds Eye) and enticed by gleaming backyard grills marketed like muscle cars into a new era of everyday cooking, in which simple attention to detail could turn the humblest ingredient into luxury. At the same time, the country was facing a reckoning with its long suppression of lives seen as “deviant.”

Beard’s home was just a stroll away from the Stonewall Inn in Greenwich Village, where a police raid in 1969 sparked a revolt that became a flash point for the gay rights movement. He wasn’t quite ready for it. After decades of public disguise, it took daring just for him to show a student from his cooking classes his collection of pillows that he’d needlepointed himself; the revelation of this private hobby is brief, but one of the book’s most moving passages.

Since his death in 1985, his legacy has lived on at the James Beard Foundation, whose annual awards focus on both the making and the chronicling of food and are considered the highest such honors in America — although Birdsall has recently criticized the foundation for its fumbling of issues of bias in judging, which he sees as entirely counter to Beard’s “progressive, anti-elitist message.” Birdsall has won two James Beard writing awards himself, the first, in 2014, for his essay “America, Your Food Is So Gay,” published in Lucky Peach, in which he recalls his struggle as a gay man in restaurant kitchens dominated by homophobic chefs who nevertheless all lusted after a James Beard award of their own.

Rereading that essay, I couldn’t help wondering what might have happened had Birdsall felt freer here to bring in his personal story, beyond the confines of the prologue — to wrestle with Beard directly, like Geoff Dyer with D. H. Lawrence in “Out of Sheer Rage” (1997) or Karen Olsson with Simone and André Weil in “The Weil Conjectures” (2019); to reimagine the possibilities of biography, and in doing so to tell a large story, not just of the past and how we got here but of all the ways we’re still failing ourselves now.

This is the worst thing a reviewer can do, to judge a book against the one not written. But like the greediest of diners, I want more.

New Books That Look at the Pandemic and Its Consequences