All minor masters sooner or later, and usually sooner, get reduced to a single word or work. (All major masters do, too, but it usually takes a little longer, with the work often placed on two pillars rather than one pedestal; Picasso, for instance, still comes to the popular imagination in two periods, the Blue and one other, take your pick.) For Ludwig Bemelmans, the matchless European-American illustrator of the ’40s and ’50s, that process has been ruthless. Bemelmans is now merely Madeline — he lives in Paris (though he created these books in New York), with the little girls in their two straight lines and Miss Clavell in her habit, turning off the light. (How many generations have drawn their first image of the divine from Miss Clavell’s benevolent bedtime outline?) It isn’t an unmerited judgment. The Madeline books — he wrote and drew six — are good enough and memorable enough to justify their place in the First Library, the imagination of childhood.

Now, however, his publisher, apparently at the urging of his daughter, Barbara, has reissued a forgotten classic of Bemelmans’s work for children. This one, devoted to New York and called (ironically, given its often dark palette) “Sunshine,” was originally published in 1950 and offers a vision of the city where he lived most of his life — one that’s picturesquely stormy, shadowy and unsettled — to place alongside, or perhaps nudge just ahead of, his vision of Paris. Where Bemelmans’s Paris is formal and ceremonial — its fun found in the space between the formality (all those grand green lawns, those perpetual perpendicular lines) and the smaller idiosyncratic acts of mischief undertaken by his children — Bemelmans’s New York, though depicted in a variant of the same Fauvist style (all slapdash black outlines and broad blocks of bright color), is properly crowded and chaotic, with the mischief arriving from the attempts to bring ceremonial order to the civic chaos, without entirely betraying the civic chaos. 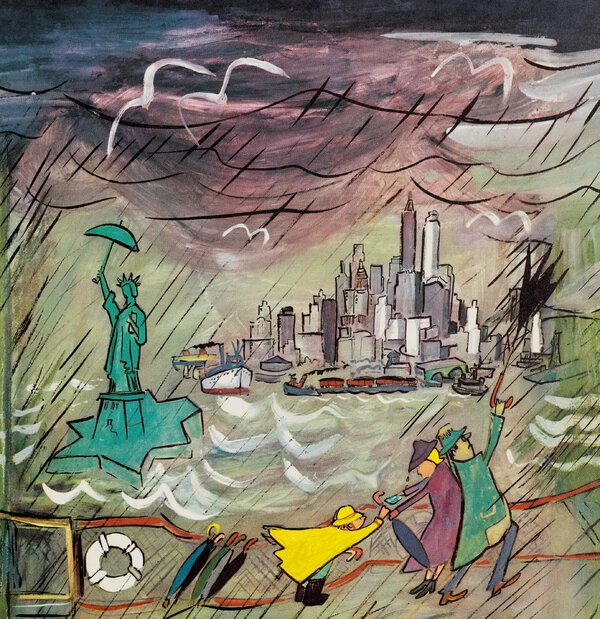 The story, slight enough, and told in Bemelmans’s familiarly sweet and efficient doggerel style — using, indeed, the same laconic singsong meter as the Madeline books — takes as its subject the great New York subject, perhaps the only New York subject: the search for living space, and quarrels over noise after it is found.

A brownstone owned by a bad-tempered elderly landlord named, oddly even for Bemelmans, Mr. Sunshine, has two rooms to let, with a ferocious set of limitations on their letting. (“Artists, acrobats or players/Traveling salesmen or soothsayers./To all those and sundry I say/Thank you kindly, go away!”) They are taken eventually by Miss Moore, a sweet old lady of the generic kind once played by Josephine Hull in the movies who turns out to be not just a music teacher but one who assembles and instructs a student orchestra. Threatened with eviction by an irate Sunshine, she is saved in a somewhat counterdramatic twist by the conditions of her lease (music, Sunshine’s lawyer says, “does not disturb the peace”) — only to find herself deeply in debt not long after, owing to a misunderstanding at an auction house that leads her into the possession of 2,000 lost umbrellas, which then must be sold to save the final day, bringing chastened landlord and musical tenant together again — as sweet a reunion as that of religious disputants in the Middle Ages.

The splendid cover of the book shows New York from the Staten Island Ferry, caught in the darkest of rain squalls, with Liberty herself holding one of Miss Moore’s umbrellas in place of her lamp. This rain, which continues to fill the book’s pages, one after another, though urged on by the purposes of the story, seems essential to its intended emotional effect, so much so that one wonders if the “look” preceded the telling.

Habitués of Bemelmans’s one mural-masterpiece, the Bemelmans Bar at the Carlyle Hotel on Madison Avenue, will already have noted that the tonality with which Bemelmans evokes New York is markedly different, and far murkier, than the one with which he evokes Paris. His New York is cop-on-the-beat blue and brownstone brown, all shellac-and-resin musty, where his Paris is liquid and singing (or, at worst, violet-gray in winter). His Paris is made of light and clouds; his New York of shadows and snowfall — shadows cast from buildings and the then extant elevated trains, to be sure, but as much a function of mystery and mood as descriptive exactitude. In the one rare, sunshine-filled scene in “Sunshine,” when the children musicians rush toward the brownstone, instruments in hand, Bemelmans shows us, almost perversely, that he can also properly capture the bright, Italianate yellow light of a New York afternoon. (His contemporary and friend Saul Steinberg used to sigh and point out that New York was on a line with Naples, not London, and that its light when seen in sunshine was essentially Mediterranean.)

The endpapers of the book are particularly splendid. They show New York Harbor again, now in snowfall, seen from the Brooklyn side, with the Manhattan skyline evoked behind the flecked snow in gray and burnt orange silhouette, and a firefighter’s Dalmatian in the foreground loping toward Engine Co. 21. The scene, in its serenity and energy, sums up Bemelmans’s New York. Where his Parisians tend to pose in pride, his New Yorkers lean into rain and weather; they shelter from storms more often than they promenade in, well, sunshine, and their lives are made of many purposes. New York for Bemelmans is a refuge more than an Eden, a city where one fights for space, music, meaning and even room for a Dalmatian.

If this welcome reappearance of “Sunshine” signals the beginning of a Bemelmans revival, perhaps someone can be persuaded to reissue his masterpiece for grown-ups, the 1948 travel book “The Best of Times,” which offers a memorable account of a trip back to Europe right after the war, with splendid full-page scenes sharing everything from the Matissean imagery of rugs on a Paris hotel stair to the look on a waiter’s face at the reopened Maxim’s to the darkest imaginable imagery of Dachau. In the meanwhile, “Far More Than Madeline” seems a fair codicil to add to Bemelmans’s too single-minded legacy.

Adam Gopnik is a staff writer at The New Yorker and author of two children’s books.