THE CAPITAL
By Robert Menasse
Translated by Jamie Bulloch

Fenia Xenopoulou grew up in an impoverished Cypriot village where the shimmering silver leaves of the olive trees served as a mirage to blind the tourists to the misery around them. As a girl she dragged bottles of mineral water up the mountainside to sell to tourists duped into visiting the dried-up cliff-side pool billed as the Baths of Aphrodite, where the goddess of love supposedly dallied with Adonis.

Bottle by bottle, coin by hard-earned coin, Xenopoulou saved money to pay for her escape: first to Athens, then London and finally Brussels, home of moules-frites, cherry beer and a convoluted European bureaucracy fit for her scheming. “The Capital,” a satire of the European Union by the Austrian novelist Robert Menasse, follows this modern-day Becky Sharp and half a dozen other so-called Eurocrats meant to offer a representative sample of the multinational mélange jumbled together in Belgium.

There is an Italian count in a red waistcoat who has an Olympic medal in fencing; a ginger-haired Brit with the face of a pig who is loyal to country over European community; and an Austrian academic with a modest proposal for a new European capital to be built on the grounds of Auschwitz. The camera pulls back further and we sniff around with a Belgian police inspector, go on the lam with a Polish assassin for a shadowy Vatican network and lose our way with a Belgian Holocaust survivor whose memory is slipping.

Coincidences place the different plots in geographic proximity rather than fully integrating them. The seams of contrivance are visible when the academic, Alois Erhart, makes not one but two visits to a revered scholar’s grave, at a cemetery also frequented by the survivor and the cop. 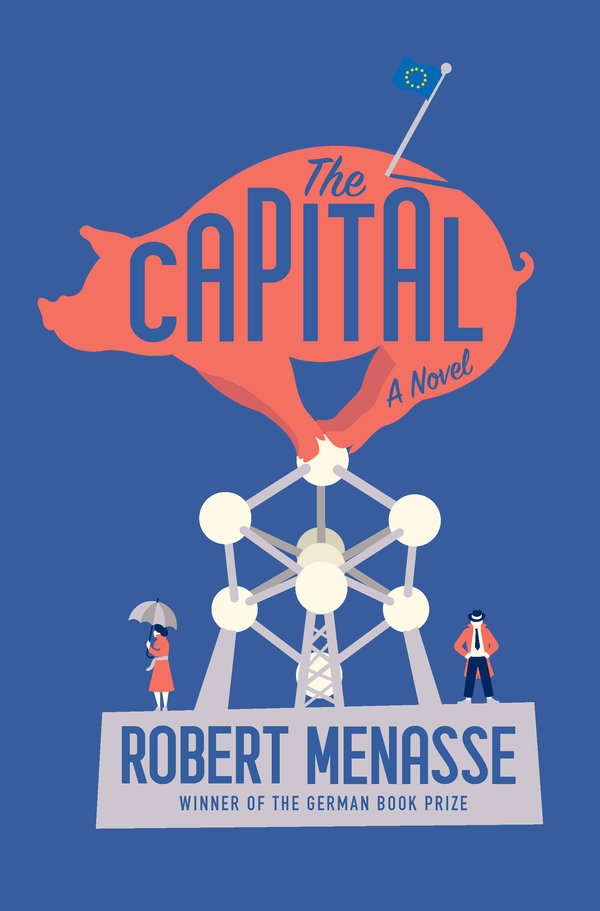 If there is a central plot, it revolves around a jubilee celebration for the European Commission’s 50th anniversary declaring Auschwitz its birthplace. Just how amusing you find that conceit will largely determine how much you enjoy the book, winner of the prestigious German Book Prize. I was largely immune to its charms.

Given that conferences, marches and seminars are regularly held at Auschwitz, the proposed jubilee did not strike me as a particularly outrageous target for satire, in the way that, say, a proposal to use that site for the costumed kitsch-fest that is the Eurovision Song Contest might be. A leaden touch often weighs down the novel, as when a preposterous Pole writes in Jar Jar Binks-caliber patois, “German underwear is best underwear for Auschwitz,” not long before another character thinks — to his credit, with embarrassment — “I caught my death of cold in Birkenau.”

A downcast colleague sulks about his sister marrying a virulent Czech nationalist. “She thinks political differences are just a male quirk,” he explains. “Women are responsible for love, and men for idiotic conflicts.” Such false notes about women dot the book at regular intervals. Xenopoulou wears, as one of her male subordinates describes her outfit, “a black skirt with a red zip running diagonally across it. As if someone had crossed out her womb!”

Xenopoulou, who at 40 frets about losing her looks and therefore her influence, has been thrust out of the Union’s powerful trade and competition departments and into another backwater that demands her escape, the directorate-general for culture. She hopes that her German paramour, a principal private secretary at trade, can arrange “her own personal bailout”: “He faked desire for her; she faked an orgasm. The chemistry was right.”

The German is involved in a more intriguing but frustratingly underdeveloped story about the “Sow Wars” — over pigs, which aren’t just animals but “transdepartmental goods,” governed by three different directorates with often competing goals. The nerdy, technical details of this conflict are more revealing about the tensions within the embattled European Union than the inexorable drift back to ruminations on the Holocaust.

I wish Menasse had ignored his Dan Brown assassin, left out his Poirot and dug deeper into the pig farmers and their swine. “The Capital” works mostly as a testament to the persistence of personal and nationalist ambitions rather than supranational ones, another bad omen for the poor E.U.

Nicholas Kulish, an investigative reporter for The Times, was the paper’s Berlin bureau chief and is the author of “Last One In,” a satirical novel about the Iraq invasion.