WHERE WE COME FROM
By Oscar Cásares

Immigration, as an issue, is ever-present. Since the earliest days of his candidacy and up through his latest tweetstorm, Donald Trump has kept front and center the question of who should be allowed into the country. It’s created a situation in which immigrants themselves are never far from the news, from our collective conversation, yet the way we talk and think about them has generally been limited to a certain number of stereotypes: the helpless child, the criminal or the victim. Oscar Cásares’s new novel, “Where We Come From,” attempts to make us see these immigrants as full human beings bearing lives we should try to understand on their own terms.

The novel takes place in Brownsville, one of the poorest Texan border towns, though the setting, as dramatic as it is, never dominates the narrative. “Where We Come From” begins with an American-born teenager, Orly, kicking a soccer ball at a pink house — a guesthouse — behind the main blue house where he’s staying with his godmother, Nina, who is also his great-aunt. His parents were in the process of getting divorced when Orly’s mother died of an aneurysm. It’s now a year later, Orly’s father is away on business, his older brother is at camp, and Orly is in Brownsville because in Houston, where he had been living, he was “growing up soft,” according to his father, and without connection to his roots. Patriarchy and machismo undergird the family structure. They also play a role in Nina’s life. As “the only girl in the family,” she’s expected to care for her elderly mother — most Latino families do not send their old to nursing homes — even as she herself is aging. 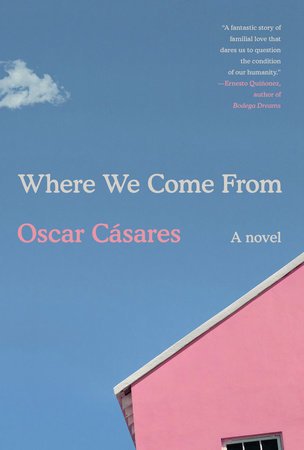 The entire first part of the novel is titled “Un Favor,” and it is indeed a favor that sets the plot in motion — specifically, a favor Nina undertakes to help her maid, which changes the lives of everyone who stays under the roofs of Nina’s blue and pink houses. We quickly learn that there is a secret within the guesthouse, obscured behind windows covered with foil. “This is the best way to keep a house cool and save money,” the narrator explains. “Who doesn’t know that?” But in reality the house is hiding a boy. Immigration, in all its lived complexity, is a prominent feature of this first half, including in a number of italicized asides that describe a migrant’s back story. Though some veer close to stereotype, Cásares is to be commended for trying to address the invisibility of what Nina’s brother calls “the illegal ones,” those who come (as Nina says) “with no names, no pasts, no futures.” There is an attempt at full humanity — but where the novel succeeds most is in its second half, when we get the full story of “the other boy” in the pink house.

Daniel is a teenager, a few years older than Orly. Nina tells him to “not come out in the day,” to “not open the door to anyone but her,” to “not even flush the toilet” and, “no matter what, do not let anyone see you.” This is the reality of living in the United States as an undocumented immigrant: a life of fear and hiding. As the novel unfolds we get glimmers of daylight, of the possibilities that await the unaccompanied kid who is trying to reunite with his father. We get to experience his joy as he walks outside for the first time in weeks and eats a raspa, a Mexican snow cone.

Cásares beautifully shows us that anyone can become part of a family and that where you come from is “nothing more than that” — where you come from. It isn’t where your story ends, “only where it begins.” Instead of being just a border novel or a novel about immigration writ large, it becomes more than that: It’s a novel about the great lengths humans will go to in order to be seen, to be touched, to be loved.