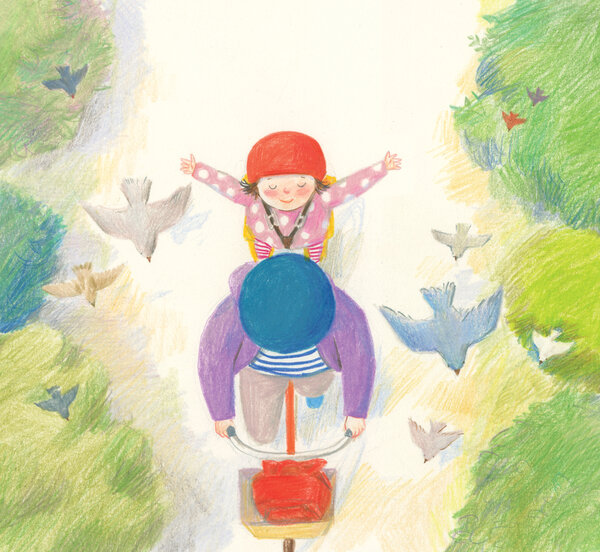 “I fly like a bird on Daddy’s bike,” the narrator joyfully croons as we watch father and daughter whizz through a coastal, colored-penciled town. “CA-CAW!” she calls, and “the birds sing back.” We smell the sea air and feel the salty breeze. Suddenly she spies “a woman with a blue coat and a big bag … walking very fast,” and clutches her dad’s sweatshirt, as gouache graffiti demons appear on a wall and a graphite shadow joins the gray-haired figure like an evil twin. Yet there she is one day in the park, “whispering a song to the birds!” Lim’s text and Yum’s art soar as the two “see” each other at last.

This first book in a trilogy about a boy who one day “became a rabbit” and has “been a rabbit ever since” won the 2007 Japanese Children’s Book Award. In lushly painted, highly immersive vignettes, we’re shown that while Sato wears a costume, his sensory nature has been transformed. The taste of watermelon spreads throughout his body. He cracks a walnut and finds rooms inside. He plucks a cloud from a puddle’s reflection and hangs it over his bed, where he “sips stories” from melted multicolored ice containing the emotions of a fully lived and dreamed life.

In this brilliant new collaboration from de la Peña and Robinson (“Last Stop on Market Street”), a boy sets out with his sister on a monthly subway trip. To occupy himself, he “studies the faces around him” and draws “pictures of their lives.” At his stop, Milo is surprised to see a boy he’s drawn in a castle join the line to pass through the metal detector. Is he visiting his mother in prison, too? Milo rethinks his pictures. Maybe the whiskered man isn’t lonely; maybe the wedding-dressed woman married a girl; maybe the breakdancers live in a fancy building. And what must they all think of him?

A refreshingly unusual grandmother — wearing “very, very long” white hair, dark-red toenail polish on bare feet and an animal-print blouse — gets on the carpet and growls. “Let’s be jaguars,” she says to her grandson, who’s “met her once before” and hides behind a large potted plant. By the time we reach the metamorphosis-depicting gatefold, the two are crawling together side by side into a wondrous, breathtakingly painted night of bonding and adventure.

Smart, subtle, yet laugh-out-loud wit that will delight both children and adults, plus abundant cartooning talent, mark this stellar debut from a young author to watch. Hwang even manages nuanced character development — for a piece of toast! Toasty wants to be a dog so much that he wears a collar. Getting down on all fours results in a face plant and rolling over is more like folding. But who can resist an aspiring canine who exits a house through the mail slot?

A kitten who has crafted a horn and tied it on her head (thanks to a handy ball of yarn) “feels so perfectly unicorn-y” when she catches her statuesque reflection in the tall mirror. Unfortunately a taunting parakeet and gecko make her feel small again — like them. She feels even smaller when what looks like a “real” unicorn arrives. But then he reveals he’s actually a “kitty-corn” with fuzzy pink ears like hers. Their frolicking shadows merge in a final image that, like the book as a whole, is a tad saccharine but has a big heart.

While a storm rages on the other side of the ship curtains at his bedroom window, Elliott buries himself in a book. A princess endlessly fights a dragon and a watercolor sea keeps “swallowing the royal boat,” with Elliott at the helm. Later, he peeks out shyly at two puddle-jumping children on the sidewalk. “Make some friends while I finish unpacking,” his mother urges. He joins them with a toy boat. Soon the S.S. Elliott is life-size, the puddles are an ocean and the dragon is a kite. Elliott’s new house feels like home.

BEAR OUTSIDE
Written by Jane Yolen
Illustrated by Jen Corace

Yolen has said a picture by Corace, of a little girl looking out confidently from the mouth of a bear, inspired her to write this book. It’s easy to understand why. Innovative in its perspective and moving in its execution (gouache that, like our emotions, sometimes bleeds outside the lines), Corace’s art perfectly matches Yolen’s words in this nuanced exploration of our inner selves. “Some folks have a lion inside, or a tiger. … I wear my bear on the outside.” And yes, it’s a “she.”

Jennifer Krauss is the children’s books editor of the Book Review.