“I cried on my 18th birthday. I thought I was a failure because I didn’t have a record deal yet,” Mariah Carey writes in her memoir, “The Meaning of Mariah Carey,” which comes out on Tuesday. Now 50, the singer and songwriter has recorded 15 studio albums, including more No. 1 singles than any other solo artist. Here is what she tells readers in her new book.

She knows what domestic violence looks and sounds like.

“By the time I was a toddler, I had developed the instincts to sense when violence was coming,” Carey writes. “As though I was smelling rain, I could tell when adult screaming had reached a certain pitch and velocity that meant I should take cover.”

She recalls numerous physical altercations, including her brother slamming her mother into a wall with such force, it sounded “like an actual gunshot.” Carey, then 6, called a family friend — “‘My brother really hurt my mother, and I’m home alone. Please come help.’” — who called the police. When they arrived, “One of the cops, looking down at me but speaking to another cop beside him, said, ‘If this kid makes it, it’ll be a miracle.’ And that night, I became less of a kid and more of a miracle.”

She experienced racism and colorism from a young age.

When she was 4, Carey used a brown crayon to color her father, who is Black, for a family portrait. She remembers a trio of teachers “cackling hysterically,” insisting she’d used the wrong shade.

“They had only ever seen one member of my family of five: my mother, who dropped me off at school each day,” Carey writes. “They had no idea and no imagination to suspect that the light toast of my skin, my bigger-than-button nose and the waves and ringlets in my hair were from my father.”

Her mother was estranged from her own parents, who didn’t approve of their daughter’s marriage. Eventually Carey’s grandmother allowed her mother to visit — but only with Carey. “I was a 12-year-old little girl and didn’t quite understand why she only invited me,” she writes. “Looking back, I suspect it was because I was blond-ish and very fair for a mixed kid.”

The singer shares occasional warm moments where she bonds with her mother over music, but most of her family memories involve fistfights, ruined holidays and airborne condiment bottles.

Some are more alarming: “When I was 12 years old, my sister drugged me with Valium, offered me a pinky nail full of cocaine, inflicted me with third-degree burns and tried to sell me out to a pimp.” As soon as Carey became a household name, her siblings and mother started treating her like “an A.T.M. with a wig on.”

When the exhausted singer sought refuge at the cabin she’d purchased for her mother, her mother called the police. “She gave them an odd, knowing look,” Carey writes, “which felt like the equivalent of a secret-society handshake, some sort of white-woman-in-distress cop mode.” Soon after, her brother abandoned her at a “spa” that turned out to be “closer to a prison” — and then at a detox facility. Later, Carey realized that her family “just happened to claim I was unstable and try to institutionalize me immediately after I had signed the biggest cash deal for a solo artist in history.” 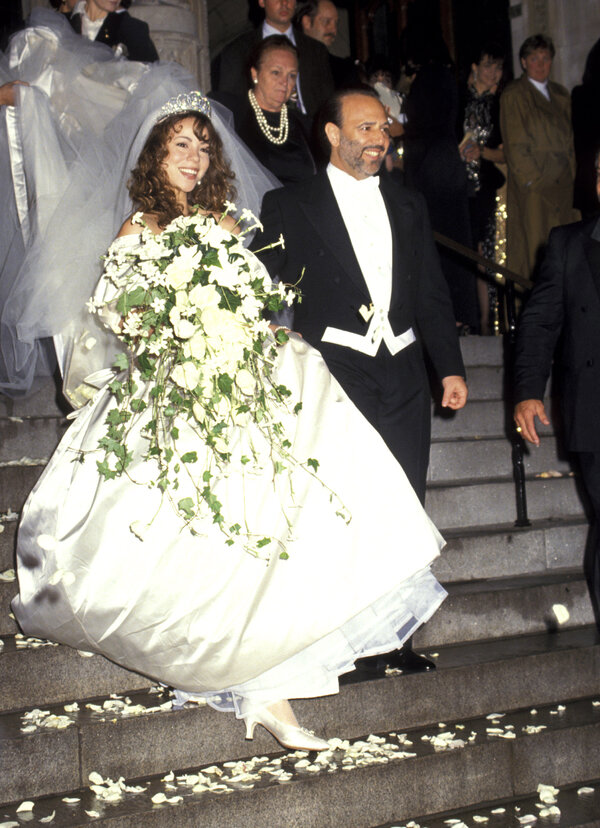 She slept near a ‘to go’ bag during her first marriage.

In her telling, Carey’s first husband — who was 21 years her senior and the president of Sony Music — was abusive and manipulative. Carey writes, “Even now it’s hard to explain, to put into words how I existed in my relationship with Tommy Mottola. It’s not that there are no words, it’s just that they still get stuck moving up from my gut, or they disappear into the thickness of my anxiety.” He wooed her with Gund teddy bears, then persuaded her to marry him (“I prayed that in doing so he would calm down and loosen his vise grip on my life”). As she describes it, “There was never really a strong sexual or physical attraction” but “I gave him my work and my trust.”

Carey slept with a “to go” bag under her bed, “filled with essentials just in case I had to make a quick escape.” The couple’s 50-acre compound in Bedford, N.Y. was “fully staffed with armed guards” in addition to the security cameras installed in most rooms. (Carey refers to the place as “Sing Sing,” after the nearby maximum-security prison.) When she went to the kitchen to write lyrics, “‘Watcha doin?’ would crackle through the speaker.”

Mottola controlled everything, from the music they listened to — “What a tragic metaphor, listening to Tommy hum ‘My Way’ as he drove us back to my captivity" — to the music she created. He wanted Carey to sound “mainstream (meaning white).” She writes, “From the moment Tommy signed me, he tried to wash the ‘urban’ (translation: Black) off of me.” Finally, after Mottola held a butter knife to her face and dragged it down her cheek, she knew the time had come to “emancipate” herself from his clutches.

Derek Jeter was the ‘catalyst’ for her to end the marriage.

When she first met the Yankees superstar Derek Jeter, Carey was turned off by his “pointy shoes” and “Kalamazoo vibe.” But when they started chatting at a candlelit restaurant in downtown Manhattan, she learned he also had an Irish mother and a Black father.

“It was like the moment in ‘The Wizard of Oz’ when the screen went from black-and-white to Technicolor,” she writes.

Thus began a clandestine, champagne-soaked, lyric-inspiring courtship. “Derek was only the second person I had slept with ever (coincidentally, his number was 2 on the Yankees),” Carey writes. “Just like his position on the team, our relationship was a short stop in my life.” But, she goes on, “he was the catalyst I needed to get out from under Tommy’s crippling control and get in touch with my sensuality. And the intimacy of our shared racial experience was major — to connect with a healthy family who looked like mine was very inspiring.”

She talks about some of her diva moments — but doesn’t explain everything.

Carey recounts her “crash” of MTV’s “TRL,” in 2001, when she appeared on the show’s set pushing an ice cream cart, wearing a “Loverboy” T-shirt and not much more. “Maybe Carson Daly didn’t know I was coming,” she writes, “but producers had to schedule my appearance — coordinators, publicists, whole-ass teams of people knew I was coming.”

She walks readers through some of her struggles with her mental and physical health, including her chronic sleeplessness; her stint at a “spa” that operated “like an upscale juvenile detention center” and where she overheard fellow patients giggling about her; and a stay at the Los Angeles detox facility where, in a room surrounded by strangers, she watched the Twin Towers “crashing down in excruciatingly slow motion” on television.

Beyond these details, however, Carey doesn’t offer much information about what she was being treated for, beyond a diagnosis of “somatization.” In 2018, she spoke publicly about having bipolar disorder, but she does not mention the diagnosis in her memoir.

Carey’s twins, Roc and Roe, are having a very different childhood from her own.

Carey and her second husband, the comedian and rapper Nick Cannon, divorced when their children were small — “Making the necessary adult adjustments to being working parents in entertainment took its toll on our relationship” — but Moroccan and Monroe (so named “because I wanted them to have the initials MC, like me”) are ensconced in “the safe and abundant environment that has been created for them.”

It is a far cry from her childhood, she writes. “Their lives have never been threatened. Cops have never stormed our house. They probably have 300 shirts to rotate and donate, and their, sweet, soft curls are deeply understood. They do not live in fear. They have never needed to escape. They don’t try to destroy each other.”