WHERE IS THE DRAGON?
By Leo Timmers

PRINCESS ARABELLA AT THE MUSEUM
By Mylo Freeman

If you were just waking up from a yearlong sleep, you might mistake the bright masks the children wear as they spill out of our neighborhood public school in the afternoon for a costume, perhaps for a play called “The Very Silent Day.” I can’t imagine what it must be like to be a child during a pandemic, as an invisible virus snags the stitching of our days, weeks and months and undoes them before they happen. Now feels like a good time for children’s books that break the spell of certainty and celebrate the unknown. 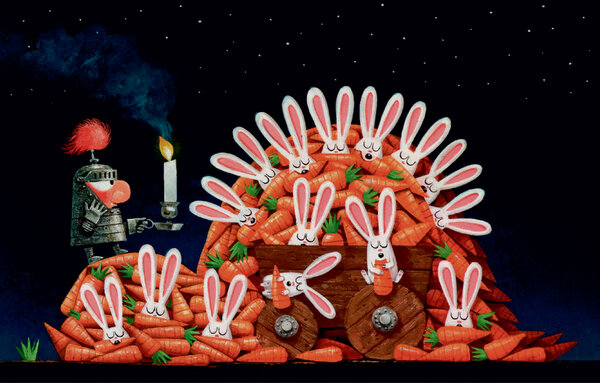 In Leo Timmers’s “Where Is the Dragon?” a king is “scared to go to bed” because “a nightmare dragon fills his head.” Three knights move across the rectangular-shaped book, which when open conveys a panoramic horizon. The smallest, bravest knight leads the way with a candlestick, flickering each page on and off, from light to shadow and vice versa. The effect is magical. It asks you to know and unknow (depending on which of the three knights you are) whether the fear is real or a trick of the light, whether what’s in the darkness is the dragon’s teeth or just the beaks of sleeping birds in silhouette.

At almost every turn, fear and its overthrow happen at once. As the knights set out to obey the king’s demand to “Save the realm! But mainly me,” the ground beneath their feet keeps shifting. At one point plants that look like tiny hands or tiny crowns sprout from the soil.

Are these even real knights, or are they in the king’s head journeying through his nightmare? What part of ourselves do we command to leave us when we are afraid? And will those parts ever return?

Timmers’s dragon recalls Lewis Carroll’s Jabberwock in that both monsters have an air of goofball about them, reminding us that fear is sometimes more violent than the monster we expect around the corner. This dragon doesn’t whiffle and burble like the Jabberwock but floats sleepily through the air, its fire lighting up a two-page spread that reads: “There is no dragon taking wing. The king is safe. …” Is the dragon not the dragon? Or is what we fear no real dragon to be feared?

“Where Is the Dragon?” is a beautiful, unsolvable riddle about fear, its manifestations and what it means to try to conquer what might have no intention of ever causing any harm.

Mylo Freeman’s “Princess Arabella at the Museum” (her sixth book about the princess) also braids the lines between inside and outside. Arabella invites her prince and princess friends to her “very own” museum, which from the outside looks like Frank Gehry’s Guggenheim Bilbao, if it were shaped like an elephant, and from the inside feels like a tour through a brilliant child’s mind.

Princess Arabella is a creature of modern art. Not only is her dress straight out of a Mondrian painting, but the black dots of her avant-garde Afro float among Yayoi Kusama’s signature dots as if Kusama had painted them herself. She recognizes her parents in a Kehinde Wiley-style portrait, then later sees her mother’s face and her own, both painted cerulean blue, in Aida Muluneh portraits.

“My dad says it’s possible to disappear inside a painting,” remarks her friend Princess Ling, but Princess Arabella subverts this idea: Rather than disappear into masterpieces, she finds where she belongs inside them, as do her guests. Even Louise Bourgeois’s giant spider, Maman, which Prince Jonas calls “a monster,” becomes a kind of mother to the children as they climb and dance around her legs and imagine they’re “her baby spiders.” If there’s a lesson here it’s that every masterpiece is an ancestor to a child’s imagination.

Klaas Verplancke’s “The King’s Golden Beard” begins “a long long time ago,” as most fairy tales do. But as the story unfolds, what once might have been “long ago” seems eerily not so long ago at all. The setting of this fairy tale about a vain king who forbids anyone but him to grow a beard feels as much like a barely skirted future as it does like an ancient past.

“Whoever dared to break the law and grow one single little hair on his or her face would be cut into a thousand pieces with a pinchy pair of nail scissors!” Even brooms and brushes must give up their bristles. Even the cat must lose her whiskers and the goat his beard; even facial hair on royal portraits must be redacted. The stick-figure guards enforcing this edict, when viewed in threes, spell out LAW (flipped over) — all angles and lines, except for their helmets, which resemble dense fingerprint smudges, the marks of individuals turned into attire to serve a king.

The king’s beard, like a virus, grows and grows, “swishes” and “swooshes,” creeps and wanders to the farthest corners of the land. By the time it reaches penguins on an iceberg (maybe in Antarctica?), the book needs to be turned upside down because even though the king believes the world is flat, it’s round.

Often in fairy tales the king’s harebrained (in this case hairbrained) decree backfires on his daughter, and the next thing you know an ogre is dragging the princess off to live with him in a world dark as a clogged chimney. In Verplancke’s story, the king’s decree backfires on the king, whose vanity shatters him. The last spread is my favorite, as a guard sweeps the beard out of the book with a broom that got its bristles back.

Sabrina Orah Mark, a poet and short story author, writes the Happily column on fairy tales and motherhood for The Paris Review.

The little bird with the very large songbook

A father's enchanting daily letters and drawings to his son