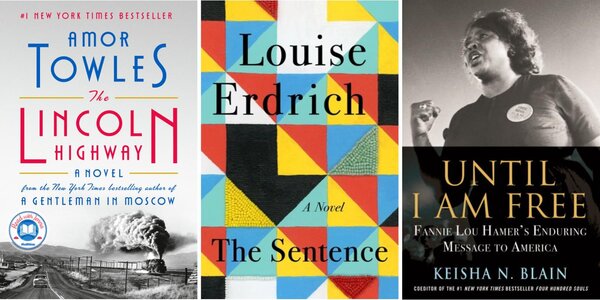 This week’s recommended books include a couple of biographies of the civil rights leader Fannie Lou Hamer, along with memoirs by the celebrated movie director James Ivory and the Kenyan activist Nice Leng’ete. There’s also a new biography of Robert E. Lee, an insider’s account of Trump-era Washington and an essay collection about antisemitism and the hazards of Jewish memory. In fiction, Jocelyn Nicole Johnson’s debut collection joins new novels by the heavyweights Louise Erdrich, Elizabeth Strout and Amor Towles.

THE SENTENCE, by Louise Erdrich. (Harper/HarperCollins, $28.99.) Erdrich’s bewitching new novel begins with a crime. An Ojibwe woman named Tookie is indicted after bundling a dead man in a tarp and delivering the body, to which crack is covertly duct-taped, in a refrigerated truck to one of her friends. After a decade, Tookie’s sentence of 60 years is commuted, and she gets a job at a Minneapolis bookstore that specializes in Native culture. When the bookstore’s most annoying customer dies, her ghost wanders into the shop and starts tormenting Tookie, who must figure out how to exorcise the woman’s malevolent presence. The novel is “strange, enchanting and funny,” our critic Molly Young writes. “Erdrich is a terrific summoner of vexed and charismatic heroines, and Tookie is no exception.”

SOLID IVORY: Memoirs, by James Ivory. Edited by Peter Cameron. (Farrar, Straus & Giroux, $30.) As a movie director Ivory is most closely associated with decorous period pieces, paeans to inhibition like “Howards End” and “The Remains of the Day,” but this memoir, starting with his upbringing in Oregon, is full of sexual frankness. Working with his producing (and domestic) partner, Ismail Merchant, and the screenwriter Ruth Prawer Jhabvala, Ivory, now 93, was one of the most dominant cinematic forces of the late 20th century. “After decades conjuring the Anglo-American aristocracy clinking cups in gardens and drawing rooms, Ivory, the survivor, is ready to spill the tea,” our critic Alexandra Jacobs writes. He does so “not in the typical big autobiographical splash but in dribs and drabs: letters, diary entries, tumbling sense-memories of fashion, food and furniture (and the other F-word), with scores of appealingly casual photographs sprinkled throughout.”

OH WILLIAM!, by Elizabeth Strout. (Random House, $27.) In her quietly radiant new novel, Strout returns to a subject she writes about brilliantly (marriage) and a character readers have met before (Lucy Barton). A long-divorced couple team up for a (platonic) trip to Maine, where they learn about family history and also about themselves. “One proof of Elizabeth Strout’s greatness is the sleight of hand with which she injects sneaky subterranean power into seemingly transparent prose,” Jennifer Egan writes in her review. “Strout works in the realm of everyday speech, conjuring repetitions, gaps and awkwardness with plain language and forthright diction, yet at the same time unleashing a tidal urgency that seems to come out of nowhere even as it operates in plain sight.”

THE LINCOLN HIGHWAY, by Amor Towles. (Viking, $30.) Set in the 1950s, Towles’s exhilarating novel follows four boys on a trip across America, from rural Nebraska to the skyscrapers of New York. All of them seek a better future but have very different ideas about how to get there; over the course of 10 days this multiperspective story offers an abundance of surprising detours and run-ins. “A reader might very well be fooled into thinking that Towles is setting off — westward, ho-hum — along the deeply rutted tracks of our national lore,” Chris Bachelder writes in his review. But “as it turns out, not reaching the intended destination becomes entirely the point and power of this mischievous, wise and wildly entertaining novel.”

Three Women: A deep dive into the complexities of female sexuality and desire